Bruce Sacerdote, an economics professor at Dartmouth College, noticed something last year about the Covid-19 television coverage that he was watching on CNN and PBS. It almost always seemed negative, regardless of what was he seeing in the data or hearing from scientists he knew.

But he was not sure whether his perception was correct. To check, he began working with two other researchers, building a database of Covid coverage from every major network, CNN, Fox News, Politico, The New York Times and hundreds of other sources, in the U.S. and overseas. The researchers then analyzed it with a social-science technique that classifies language as positive, neutral or negative.

The results showed that Sacerdote’s instinct had been right — and not just because the pandemic has been mostly a grim story.

The U.S. media is an outlier

The coverage by U.S. publications with a national audience has been much more negative than coverage by any other source that the researchers analyzed, including scientific journals, major international publications and regional U.S. media. “The most well-read U.S. media are outliers in terms of their negativity,” Molly Cook, a co-author of the study, told me.

About 87 percent of Covid coverage in national U.S. media last year was negative. The share was 51 percent in international media, 53 percent in U.S. regional media and 64 percent in scientific journals. 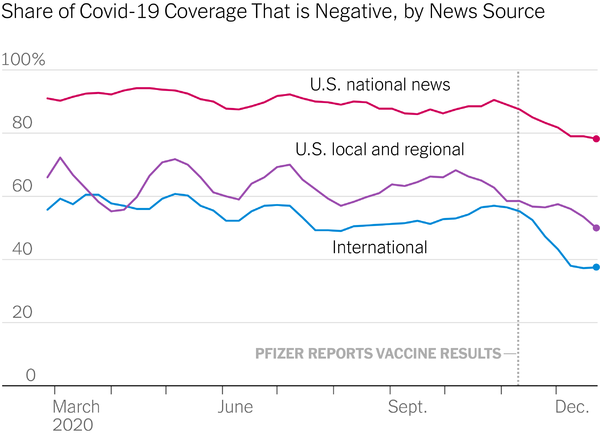 Sacerdote is careful to emphasize that he does not think journalists usually report falsehoods. The issue is which facts they emphasize. Still, the new study — which the National Bureau of Economic Research has published as a working paper, titled, “Why is all Covid-19 news bad news?” — calls for some self-reflection from those of us in the media.

If we’re constantly telling a negative story, we are not giving our audience the most accurate portrait of reality. We are shading it. We are doing a good job telling you why Covid cases are rising in some places and how the vaccines are imperfect — but not such a good job explaining why cases are falling elsewhere or how the vaccines save lives. Perhaps most important, we are not being clear about which Covid developments are truly alarming.

As Ranjan Sehgal, another co-author, told me, “The media is painting a picture that is a little bit different from what the scientists are saying.”

Why the bad-news bias?

The researchers say they are not sure what explains their findings, but they do have a leading contender: The U.S. media is giving the audience what it wants.

When the researchers examined which stories were the most read or the most shared on Facebook, they tended to be the most negative stories. To put it another way, the stories that people choose to read skew even more negative than the stories that media organizations choose to publish. “Human beings, particularly consumers of major media, like negativity in their stories,” Sacerdote said. “We think the major media are responding to consumer demand.”

That idea is consistent with the patterns in the data, Sacerdote added: It makes sense that national publications have better instincts about reaching a large audience than, say, science journals. And overseas, some of the most influential English-language media organizations — like the BBC — have long received government funding, potentially making them less focused on consumer demand.

All of that sounds plausible to me, but I don’t think it is the full explanation. I have worked in media for nearly three decades, and I think you might be surprised by how little time journalists spend talking about audience size. We care about it, obviously, but most journalists I know care much more about other factors, like doing work that has an impact.

In the modern era of journalism — dating roughly to the Vietnam War and Watergate — we tend to equate impact with asking tough questions and exposing problems. There are some good reasons for that. We are inundated by politicians, business executives, movie stars and others trying to portray themselves in the best light. Our job is to cut through the self-promotion and find the truth. If we don’t tell you the bad news, you may never hear it.

Sometimes, though, our healthy skepticism can turn into reflexive cynicism, and we end up telling something less than the complete story. I am grateful to Sacerdote, Cook and Sehgal for doing to us journalists what we normally do to others — holding up a mirror to our work and giving us a chance to do better.

The victims of Monday’s mass shooting in Boulder, Colo., include a police officer with seven children and a “happy-go-lucky” grocery store worker.

The authorities charged a 21-year-old man with 10 counts of murder. The police said the man was armed with a handgun and a military-style rifle.

A panel reviewing AstraZeneca’s vaccine trial data in the U.S. said the company had cherry-picked results to make the shot appear more effective. Dr. Anthony Fauci said it could undermine faith in what is “very likely a very good vaccine.”

The E.U. is planning to temporarily curb exports of Covid vaccines that are made in the bloc to address supply shortages. It could reduce supply to Britain and other countries.

Roughly one in four Americans has received at least one dose of a Covid vaccine.

The White House said it would appoint an official to focus on Asian-American priorities after the Senate’s two Asian-American Democrats criticized a lack of representation at the Biden administration’s highest levels.

The Times obtained videos showing how Brian Sicknick, the Capitol Police officer who died after the Jan. 6 riot, was attacked with chemical spray.

Prime Minister Benjamin Netanyahu’s party held a lead in Israel’s fourth election in two years, but it’s unclear if he will have enough votes to form a majority government.

Commentary about the rise in attacks on Asian-Americans:

But not every crime is a hate crime and it’s a mistake to pretend otherwise, The Times’s Bret Stephens writes.

Polar Plunge: The world’s best free diver sets his sights on a record: 80 meters below the ice.

Lives Lived: George Segal began his career in serious drama but became one of America’s most reliable and familiar comic actors. Most recently he played “Pops” on the sitcom “The Goldbergs.” He died at 87.

This week, Dr. Mehmet Oz, a heart surgeon and television personality, became the latest guest host of the game show “Jeopardy!” after the death of Alex Trebek. The choice has angered some of the show’s fans, who argue that Dr. Oz’s history of promoting dubious medical treatments goes against the show’s emphasis on facts.

“I’ve spent a lot of time talking to people in the ‘Jeopardy!’ community in the past few years,” Claire McNear wrote in The Ringer. “I cannot remember outrage anything like the response” to the decision. On Twitter, Seung Min Kim, a reporter for The Washington Post, wrote, “Dr. Oz on Jeopardy 👎.”

An accomplished cardiothoracic surgeon in the 1990s, Dr. Oz gained attention on “The Oprah Winfrey Show,” eventually starting his own talk show in 2009. Over the years, other doctors have criticized him for pushing weight-loss products and suggesting hydroxychloroquine as a treatment for Covid. In 2014, a British medical journal wrote that “no evidence could be found” for about a third of the recommendations Dr. Oz had made on his show.

He defended himself in 2015, writing: “I bring the public information that will help them on their path to be their best selves.”

Sharon Stone writes about her life and brushes with death in a new memoir. Read a Q&A.

The hosts discussed gun violence in the U.S.

The pangrams from yesterday’s Spelling Bee were balletic, celibate and citable. Here is today’s puzzle — or you can play online.

P.S. The Times covered a public demonstration of Thomas Edison’s newly patented phonograph — including “Mary Had a Little Lamb” — 143 years ago today.

Today’s episode of “The Daily” is about Biden and gun control. On “The Argument,” a debate about cancel culture.