Since George Floyd’s death last May, dozens of states and local governments have changed their laws about police behavior. And yet police officers continue to kill about three Americans each day on average, nearly identical to the rate of police killings for as long as statistics exist.

Which raises the question: Are the latest efforts to change policing — to make it less violent, especially for Black and Latino Americans — destined to fail?

Not necessarily, many experts say. They believe the recent changes are meaningful. They will probably fall well short of solving the country’s problem with needlessly violent police behavior. But the changes still appear to be substantial, even if they will take some time to have a noticeable effect.

“You actually can get a lot of common ground between police critics and police themselves,” Rosa Brooks, a Georgetown University law professor and former reserve police officer in Washington, told us. “There are plenty of places where those conversations seem to be occurring in a preliminary way.”

That common ground extends to public opinion. Most Americans disagree with sweeping criticisms of the police, like the calls to abolish police departments. (Rashida Tlaib, a Democratic congresswoman from Michigan, wrote last week on Twitter: “No more policing, incarceration, and militarization. It can’t be reformed.”) Recent polls show that most Americans say they generally trust the police, and few if any mayors, governors, congressional leaders or top members of the Biden administration share Tlaib’s view.

But many politicians and most voters do favor changes to policing, like banning chokeholds and racial profiling or mandating police body cameras. “Americans — both Democrats and Republicans — want some sort of reform,” Alex Samuels of FiveThirtyEight wrote. 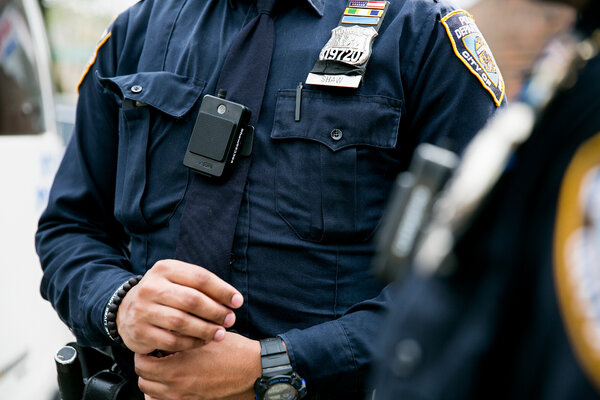 The recent policy changes fit into two main categories. The first is a set of limits on the use of force. Sixteen states have restricted the use of so-called neck restraints, like Derek Chauvin’s use of his knee on Floyd’s neck. And 21 additional cities now require officers to intervene when they think another officer is using excessive force.

The changes have mostly been in Democratic-leaning states, but not entirely: Kentucky has limited no-knock warrants, which played a role in Breonna Taylor’s death, while Indiana, Iowa and Utah have restricted neck restraints. (Republican legislators in some states are pushing bills that go in the other direction, by strengthening penalties for people who injure officers, for instance, or by preventing cities from cutting police budgets.)

The second category involves police accountability. Several states have mandated the use of body cameras. Colorado, New Mexico, Massachusetts and Connecticut have made it easier for citizens to sue police officers, as has New York City.

In Maryland, David Moon, a state legislator, said that the recent changes were “just light-years beyond” those enacted after Freddie Gray died in the custody of Baltimore police six years ago. The new laws “basically blew up the old system and tried to create a new structure for discipline,” Moon told The Washington Post.

One significant part of the policy changes: States are enacting them, forcing local police departments to abide by them. “States had given great leeway to local jurisdictions to decide how to police themselves,” The Times’s Michael Keller told us. “Now, states are starting to take more control.”

It’s too early to know whether all of the attention on policing after Floyd’s death will amount to widespread changes. “Police organizations have an amazing ability to resist change when there’s no real buy-in from the rank and file,” Brooks said. But there does seem to be a greater recognition of what policing has in common with virtually every other human endeavor: It works better when it includes clear standards and outside accountability.

“What we’ve seen since George Floyd’s death — and really since the death of Michael Brown in Ferguson, Mo., in 2014 — is a widespread acknowledgment that law enforcement needs new rules and policies,” my colleague John Eligon, who has covered policing extensively, said. “But there is still a great frustration among many activists and community members I talk to who say that the changes do not go nearly far enough.”

He added: “They see tinkering around the edges that does not really change the culture of police departments or solve the big problem: that police in America are still killing people every day.”

News from the Chauvin trial:

In closing statements, the prosecution urged jurors: “Believe your eyes. What you saw, you saw.” The defense argued that Chauvin had not “intentionally, purposefully applied an unlawful force” to Floyd.

The jurors have begun deliberating.

The judge said that Representative Maxine Waters’s suggestion that protesters would “get more confrontational” if the jury found Chauvin not guilty could be grounds for an appeal.

Walter Mondale was a Minnesota minister’s son who became a senator and Jimmy Carter’s vice president before losing the 1984 presidential election to Ronald Reagan. He has died at 93.

The medical examiner in Washington said that Brian Sicknick, a Capitol Police officer attacked during the Jan. 6 riot, died of natural causes, but added that the riot “played a role.”

After the policy whiplash between administrations, some foreign leaders are wary of trusting the U.S. on climate plans.

A group of Black religious leaders in Georgia will call for a boycott of Home Depot for not pushing back on the state’s new voting law.

Forty-five percent of Texas voters said in a poll that they would vote for Matthew McConaughey if he were to run for governor.

Adults 65 and older are the most vaccinated age group in America, although about a fifth have not yet received a shot.

Everyone 16 and older is now eligible to get a vaccine in the U.S. “Go and get ’em, folks,” President Biden tweeted.

The pandemic’s economic devastation has been especially stark in Argentina.

The authorities had known that the gunman at an Indianapolis FedEx warehouse last week was mentally unstable, but they did not invoke a “red flag” law to bar him from buying guns.

A grizzly bear fatally mauled a man near Yellowstone National Park in Montana.

In Ruins: Some Syrians fleeing violence have sought refuge in ancient archaeological sites.

Lives Lived: LaDonna Allard helped kick off the movement opposing the Dakota Access Pipeline by donating her land to be used as the site of a resistance camp. She died at 64.

The highest levels of professional soccer — Europe’s leagues and its annual continentwide championship — may be unraveling.

For decades, the best teams have participated in both their domestic leagues and a European tournament, now known as the Champions League. Unlike in major American sports, where all teams are chasing a single trophy, the top European soccer teams are trying to win at least two.

This week, 12 teams — six from England (including Liverpool and Manchester United) and three each from Italy and Spain (including Juventus and Barcelona) — announced they would drop out of the continentwide tournament to form a breakaway Super League. It’s an attempt to earn even bigger profits without worrying about failing to qualify for the Champions League every year. The organizers hope to add three more permanent members to the new league, which will feature 20 teams, including five rotating ones.

“The proposal is the most seismic challenge to the European football model since its inception,” The Atlantic’s Tom McTague writes. Without 12 of the most glamorous teams, the Champions League will lose much of its luster and revenue. And although the 12 teams have said that they want to remain in their domestic leagues, the executives of those leagues are so angry about the Super League that they may try to bar the teams. Politicians, like Boris Johnson of Britain, are angry, too.

“The breakaway clubs have, effectively, sealed off the summit,” The Times’s Rory Smith says. “It is what makes this such a compelling, and dangerous, moment.”

Rory and Tariq Panja have written an explainer with more details, and you can follow the story by reading Rory’s newsletter.

Leeks slow-cooked in olive oil are the star of this hearty vegetarian meal.

Each summer along the Alaska coast, millions of salmon begin their journey back to the rivers where they were spawned. See what it’s like.

A viral essay about a Korean grocery store and a mother’s death led the musician Michelle Zauner, who performs under the name Japanese Breakfast, to write a memoir, “Crying in H Mart.”

Fill out an Oscars ballot before Sunday’s ceremony.

The hosts joked about the MyPillow C.E.O.

The pangrams from yesterday’s Spelling Bee were illegality and legality. Here is today’s puzzle — or you can play online.

P.S. After being vaccinated, our colleague Kevin Roose made a surprise trip to visit his mom for her birthday. Here’s her reaction.

Today’s episode of “The Daily” is about anti-transgender legislation. On “Popcast,” who gets the credit for TikTok dances? And listen to Chapter 3 of “The Improvement Association.”

Opinion | Going Big: How Joe Biden Is Like F.D.R.