Chicago is far away from rising oceans and melting glaciers. It does not sit in the path of hurricanes, nor is it vulnerable to the rising number of forest fires in the American West.

“In the search for a big-city refuge from climate change, Chicago looks like an excellent option,” the author Dan Egan writes in The Times. “At least, it does on a map.”

But Chicago has a problem, one that’s almost certainly caused by the forces that climate change has released. A balance has long existed between the city’s two great bodies of water, Lake Michigan and the Chicago River. And the changing climate is upending that balance on both ends, putting the city at risk of both surging and falling water levels.

It is a case study of the complex threats from a warming planet. Those threats are not simply the obvious ones — of heat, drought and melting ocean ice. Climate change can also cause counterintuitive changes in the opposite direction. Perhaps the clearest example in recent years has been the weakening of the Polar Vortex, which has unleashed blasts of cold air into the U.S.

‘Extremes on both ends’

Chicago is threatened by another mix of these complicated factors. On the one hand, climate change has led to a nationwide increase in heavy rainfall, because warmer air can hold more moisture than colder air. (A simple way to understand the difference: Your skin doesn’t get as dry in the summer as in the winter.)

In the Great Lakes region, the past five years have been the wettest half-decade on record. The extra rainfall has raised the level of Lake Michigan and the Chicago River, led to more frequent flooding, damaged homes in the city and begun to erase lakefront beaches. 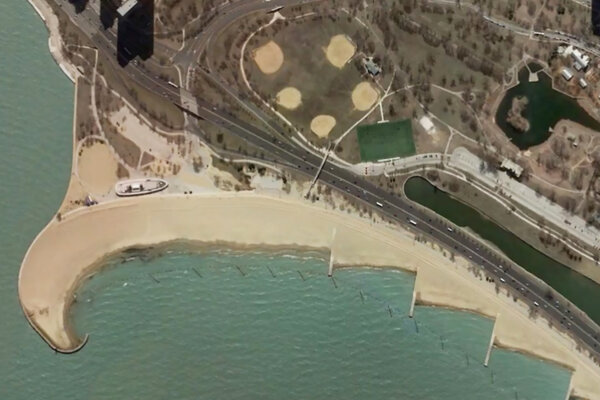 On the other hand, the warming planet also serves to lower the lake’s and river’s water levels in a different way: Water evaporates more quickly in the heat.

The result, as one expert says, is an emerging tug of war between evaporation and precipitation. In the best case scenario, the two would roughly cancel out, and the lake and river would always remain near their historical levels. But that doesn’t seem to be happening. Instead, as John Allis of the Army Corps of Engineers told Dan Egan, “We can expect extremes on both ends.”

Flooding has become more common. At one 13-story apartment building on the South Side, there is no longer patio furniture on the terrace overlooking the lake. It has been replaced by sandbags, massive concrete blocks and other flood barriers.

And yet increased rates of evaporation — from hot weather — have also left Lake Michigan at risk of falling so low at times that it would no longer flow into the Chicago River. The river would flow into the lake. That would be a problem, given that the river carries away the city’s wastewater — and the lake is the source of the city’s drinking water. The flow between drinking water and wastewater should obviously go in only one direction.

It all makes for an alarming story about a great American city — and a case study in the growing, uncertain dangers that the world faces after years of doing little to confront the menace of climate change. Dan’s story is accompanied by beautiful photos of Chicago, taken by Lyndon French.

Related: Last week’s deadly heat wave in the Pacific Northwest “would have been virtually impossible without climate change,” researchers found.

Haitian officials said the police killed four people and arrested two others suspected in the assassination of President Jovenel Moïse, but didn’t name them.

Moïse’s wife, Martine, was also shot. She is in critical condition, an ambassador said.

Moïse had shown signs of authoritarianism, refusing to leave office and trying to rewrite the Constitution. Thousands of Haitians had protested.

Claude Joseph, the interim prime minister, said he would run the country and placed Haiti under a form of martial law.

Haiti has struggled to recover from an earthquake in 2010. Armed gangs control parts of the capital, and poverty and hunger are on the rise.

Delta is now the dominant variant of the virus in the U.S., the C.D.C. estimates. A study from Israel found that the Pfizer vaccine was effective against it.

The official Covid death toll in U.S. prisons is over 2,700 people. The real number is probably higher, as some facilities released very ill inmates before they died.

Donald Trump sued Facebook, Twitter and Google to restore his accounts. His political operation immediately began fund-raising off it.

Crews searching the rubble of the collapsed high-rise in Surfside, Fla., said they did not expect to find more survivors.

Police officers arrested Jacob Zuma, South Africa’s former president. A court sentenced him in June to 15 months in prison for failing to appear before a corruption inquiry.

England, after 55 years of dashed hopes, beat Denmark to reach the final of the Euro 2020 soccer tournament. They play Italy on Sunday.

Definition, please: Tonight is the final of the Scripps National Spelling Bee. The Times has created its own spelling game — with 15 words, each read by an editor or reporter. See how well you can do.

Outerspace: Tuesday, it was “the restaurant of the summer.” Wednesday, the chefs called it off.

Music & robots: The next hit song you hear could be co-written by A.I.

“Sermongate”: Should pastors borrow words from one another?

Advice from Wirecutter: You’re probably washing your jeans too often.

Lives Lived: Some know Robert Downey Sr. as a famous actor’s father. But in the 1960s and ’70s, he directed provocative movies that were critical favorites, including the 1969 comedy “Putney Swope.” Downey Sr. died at 85.

A primer for the N.B.A. Finals

This year’s N.B.A. Finals have a new look. Neither team — the Milwaukee Bucks and the Phoenix Suns — has won a title in 50 years. Only one player (Phoenix’s Jae Crowder) has played in a Finals before.

But their presence is not a fluke. Each had excellent regular-season records and beat a powerhouse in the playoffs: The Suns over LeBron James’s Lakers, and the Bucks over the Brooklyn Nets superteam. So who are these finalists?

The Suns are led by Chris Paul, a 36-year-old point guard with an ability to anticipate his teammates’ movements. Paul throws sublime passes that set up the team’s two young stars: Devin Booker and Deandre Ayton. (Paul is the rare N.B.A. star who was not on his high school varsity team in 10th grade.)

The Bucks orbit around Giannis Antetokounmpo, a two-time M.V.P. who is both a scorer and a tough defender. But Antetokounmpo injured his knee in the previous round, and he lacked his usual force in the first game of the finals, which the Suns won. If he isn’t at full strength, the Bucks may struggle.

This picnic-perfect chicken sandwich is spruced up with muhammara, a Middle Eastern spread of roasted red peppers, walnuts and pomegranate molasses.

The Cannes Film Festival kicked off with a five-minute standing ovation for “Annette,” the new Adam Driver-Marion Cotillard musical. Here are more highlights from opening night.

Cabaret is back in New York. See for yourself.

The pangram from yesterday’s Spelling Bee was thrilling. Here is today’s puzzle — or you can play online.

P.S. Kate Kelly, who covers Wall Street for The Times, will join the Washington bureau to write about lobbying.

“The Daily” is about the end of America’s longest war. On the Modern Love podcast, an eclipse sparks a revelation. “Sway” features Chelsea Handler.