The spread of the Delta variant in relatively unvaccinated parts of the U.S. is getting worse.

In many urban and suburban communities, Covid continues to plummet. The rate of new daily cases has fallen below three per 100,000 residents in large cities like Atlanta, Boston, Chicago, Detroit, Houston, Minneapolis, New York, Philadelphia, San Francisco and Washington. As a point of comparison, the national rate of new daily cases peaked last winter above 75 per 100,000 people.

But in less populated areas — which tend to be more politically conservative and skeptical of vaccines — the virus is now surging, largely from the contagious Delta variant. The states with the worst outbreaks are Arkansas and Missouri (each with more than 16 new daily cases per 100,000 people) followed by Florida (10), Nevada (10), Wyoming (nine) and Utah (eight).

If these outbreaks were concentrated among younger people, it would be less worrisome, because Covid, including the Delta variant, is overwhelmingly mild for children and young adults. Yet even many middle-aged and older adults are not vaccinated in parts of the U.S. They are catching the virus as a result, and some are dying.

There is a clear relationship between a state’s Covid death rate over the past week and its overall vaccination rate: 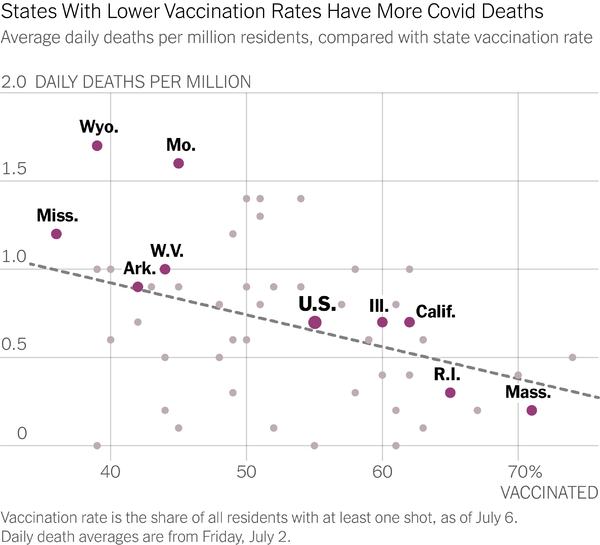 (You can look up any state’s data here.)

The biggest tragedy is that this situation is avoidable. Highly effective vaccines are available to virtually any American adult who wants one — a privilege that residents of many other countries do not have. Hundreds of U.S. clinics, including in rural communities, offer immediate, walk-in shots.

Still, only 54 percent of adults in rural areas have received at least one vaccine shot, according to the most recent Kaiser Family Foundation poll, compared with 72 percent of urban residents. Kaiser found that vaccination rates were also below average for Americans under 50; Black Americans; Republicans; and people without a college degree.

Tricia Jones, a 45-year-old mother of two in Grain Valley, a small city in western Missouri, did not get the vaccine because she was concerned about the side effects. Her mother, Deborah Carmichael, had felt sick after getting a shot, and Jones decided to wait.

This spring, Jones caught the virus. She was hospitalized May 13 and died June 9. Now, as Sherae Honeycutt of Fox4 in Kansas City writes:

Her family is praying people will see Tricia’s life as a call to action to get their vaccine — if not for themselves, for the ones they love. “Please take this seriously. You don’t want to see a family member you love go through this,” Carmichael said. “You have a way better chance of coming out OK than if you don’t.”

Marc Johnson, a University of Missouri immunologist, told The Missouri Independent that he expected the state’s outbreak to continue worsening for much of July. In some communities, the Delta variant has only recently arrived, suggesting a coming surge.

Despite the rise in caseloads and deaths, many Republican politicians have declined to offer a full-throated call for vaccination. Instead, state legislators in Missouri have warned hospitals not to require employees to get vaccinated. And Gov. Mike Parson has sent mixed messages.

“You’re gonna have to take responsibility, to take the vaccine, if you so choose to,” Parson said last week. “But you know, I think it’s important to understand that there’s risk involved.”

A few Republican governors have taken a different approach. “We’re in a race against this Delta variant,” Gov. Asa Hutchinson of Arkansas said on Sunday. “The solution is the vaccinations.” Gov. Jim Justice of West Virginia was blunter: Anybody who is not vaccinated, he said, has entered “the death lottery.”

To reach unvaccinated Americans, President Biden said the government would set up clinics at workplaces and urge employers to offer paid time off.

Adams — whose anti-crime message resonated with working-class voters — is a heavy favorite to win the general election and become the city’s second Black mayor.

Adams led the primary count since election night, though his lead shrank with each new ranked-choice tally. He is now ahead of Garcia by 1 percentage point.

The Pentagon canceled a $10 billion cloud-computing contract with Microsoft, after Amazon accused the Trump administration of interfering with the bidding process.

The Russian hackers behind the SolarWinds attack seem to have breached a contractor for the Republican National Convention, investigators say.

The sprinter Sha’Carri Richardson, who failed a drug test for marijuana, will miss the Tokyo Olympics after officials did not choose her for the U.S. relay team.

Rachel Nichols will not cover the N.B.A. finals on ABC. Nichols, who is white, has made disparaging comments about a Black colleague. (Here’s the background.)

Italy beat Spain to reach the final of the Euro 2020 soccer tournament. England plays Denmark today for the other spot.

The average price of a gallon of gas in the U.S. has risen nearly $1 in the past year. Oil production, which slowed during the pandemic, has failed to keep pace with demand.

The death toll in last month’s Florida building collapse remains unclear — it’s probably between 100 and 150 — because the authorities are unsure how many residents were there at the time.

Last month was the hottest June on record in North America, more than 2 degrees hotter than the recent average.

Nikole Hannah-Jones, a Times Magazine writer, will join Howard University’s faculty, rejecting an offer from the University of North Carolina after a dispute over her tenure status.

Dive in: It’s never too late to learn how to swim.

A Times classic: Ask these 13 questions before you get married.

A hit-making duo taps into ‘newstalgia’

Jimmy Jam and Terry Lewis have been shaping pop music for nearly 40 years. A sampling of songs they’ve written or produced: “Nasty” by Janet Jackson, “Human” by the Human League, “Monkey” by George Michael and “U Remind Me” by Usher.

The pair are responsible for hits “strong enough to snatch a body and render it a Gyratron,” Wesley Morris writes in The Times. Often clad in matching suits, fedoras and shades, Jam and Lewis first met as middle schoolers. “They get along better than a married couple,” Jackson said.

Jam describes the album as “newstalgia” — a blend of old-school and contemporary sounds. “It’s that feeling that you get when you hear something that’s new,” he said, “that’s exciting, but it takes you back to a place that’s very comfortable and very reassuring.”

Read the rest of the story (and listen to a playlist of their hits). — Sanam Yar, a Morning writer

Make mayo-marinated chicken with chimichurri (we promise it won’t taste like mayo). Serve it with a side of grilled corn with jalapeño-feta butter.

See an annual pilgrimage to gather peyote in the Mexican desert.

In Carolyn Ferrell’s “Dear Miss Metropolitan,” three young girls are kidnapped and kept in a decaying house for a decade.

These five minutes of music will make you love symphonies.

The pangram from yesterday’s Spelling Bee was ennoblement. Here is today’s puzzle — or you can play online.

Clarification: Yesterday’s newsletter said that Stephen Breyer was the Democratic-appointed Supreme Court justice who most often sided with businesses over workers or consumers. In recent terms, he has voted similarly on those issues to Elena Kagan and Sonia Sotomayor.

“The Daily” is about a divisive new treatment for Alzheimer’s.