This is a public health crisis that threatens to become a humanitarian disaster.

Dr. Bassett was the New York City health commissioner. Mr. Gonzalez is the district attorney of Brooklyn. Mr. Walker is the president of the Ford Foundation. 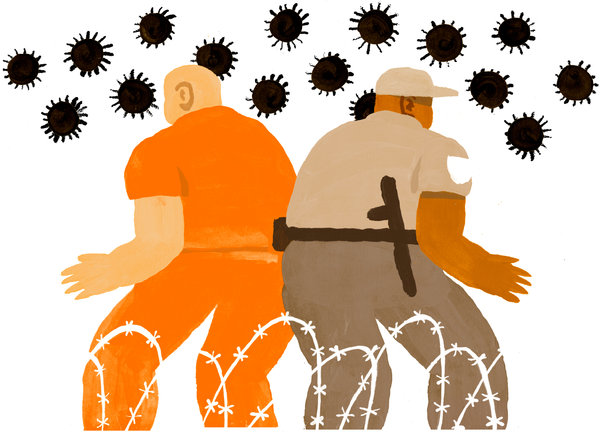 Gov. Andrew Cuomo has been an exemplar of leadership in this time of crisis, someone to whom other state and local officials are looking for guidance. On Friday, the governor took the crucial step of ordering the release of 1,100 people from New York’s jails and prisons. But he must do more. If we don’t act fast, we jeopardize the lives of many. Worse yet, we risk creating a uniquely deadly incubator for the virus.

America incarcerates more people than any other nation on earth — some 2.3 million people, nearly 80,000 of whom are locked up in various New York correctional facilities for young people and adults. No other country in the world faces the kind of threat gathering in our jails and prisons.

Given the conditions in which incarcerated people live — limited access to soap and water; shared bathrooms, mess halls and living quarters — this population is especially vulnerable to the virus, and largely unable to prevent its spread. In New York, we’ve already begun to see the effects. Dozens of residents and correctional staff members have tested positive. More will follow.

The consequences will be devastating, for people both inside and outside prison walls. When officers and staff members who work in prisons get infected, they will bring the virus home to their families. As happened in Italy, mounting tensions inside prisons, where anxious residents no longer have access to family visits or the proper supplies to protect themselves, create security risks that will be compounded by short staffing when correctional officers fall sick.

And because of inadequate medical care in most of these facilities, people in prison who become infected will die unnecessarily, while others will be transferred to local hospitals in rural communities upstate, where most of New York’s prisons are. These hospitals are woefully unprepared for the influx of patients, adding to growing strain on our state’s health care system. Dr. Ross MacDonald, the chief physician for the Rikers Island jail complex, was not being hyperbolic when he wrote on Twitter recently: “A storm is coming.”

We have little time to curb the spread of the virus within our state’s jails and prisons, and, by extension, across our state. This is not only an issue about the health of people in prisons, but also a public health crisis that threatens to become a humanitarian disaster.

For this reason, we and a number of public health experts call on Mr. Cuomo to release as many people as possible from New York’s correctional facilities, and to ensure they have the medical and re-entry help they need when they return home.

Here are several actions Mr. Cuomo must take, in addition to ending money bail for most people charged with crimes:

First, the governor should grant compassionate release to elderly inmates, as well as those with health conditions that put them at higher risk, including people with chronic and co-morbid conditions such as asthma and chronic obstructive pulmonary disease, and those who are pregnant or have with immune deficiencies. We know that older incarcerated people are both more vulnerable to the disease and present the lowest risk of reoffending.

Second, Mr. Cuomo should release the thousands of people currently incarcerated on noncriminal technical violations of their parole, like missing an appointment with a parole officer — except in the very few cases in which a technical violation involves a risk to public safety. There are some 4,000 people incarcerated in New York prisons for such non-crimes. Only the governor has the power to release these people — and 50 current and former parole commissioners around the country already have recommended he do so.

Third, he should grant early parole to people who are up to 180 days away from completing their sentences. After all, they’re coming home in weeks or months.

And, finally, the governor should direct prison and jail administrators to furlough low-risk inmates and use his own emergency powers to extend those furloughs through the end of the crisis.

Mr. Cuomo has often noted that our state does not need public policies that only “sound good,” but rather ones that are “good and sound.”

There is no good reason to keep putting residents, as well as police and correctional officers, at risk — or to turn a parole violation into a death sentence. Why needlessly strain our state’s systems or incubate the virus inside correctional facilities for future spread? There is no sound reason that elderly and vulnerable people, who pose no threat to the public, should be sentenced to die in prison.

We must protect public safety. But, today, there is no greater threat to public safety than the coronavirus. There are hundreds, if not thousands, of incarcerated people in New York who can safely be released to their families and communities.

Mr. Cuomo alone holds the power to save the lives of people trapped in New York’s prisons and jails. We call on him to build on the important step he has already taken and do the good and sound thing for human dignity, public health and a more humane justice system.

Mary Bassett (@DrMaryTBassett) is the director of the François-Xavier Bagnoud Center for Health and Human Rights at Harvard. Eric Gonzalez (@BrooklynDA) is the district attorney of Brooklyn. Darren Walker (@DarrenWalker) is the president of the Ford Foundation.