Bret Stephens: Good morning, Gail. I was reading on social media that Osama bin Laden is alive and well and that he’s living inside Donald Trump’s brain. Care to comment?

Bret: And now, thanks to a Trump retweet of a bonkers-despicable- QAnon-linked conspiracy theory, we have: the United States didn’t actually kill Bin Laden, but Biden killed the Navy SEALs who killed Bin Laden’s body double. Eventually, “Jeopardy!” will have a category called “Trump’s Lowest Twitter Moment” and that will be the daily double.

Gail: Lately, when he goes into one of those rants, I relax by picturing the moment when we get to say: “Obama got elected to a second term — you didn’t.”

Gail: Speaking of the competition between Trump and Biden, what did you think of those town hall pseudo debates?

Bret: I think they’re a public service. Biden continues to dispel the myth that he no longer has a brain. And Trump continues to dispel the myth that he’s ever had a heart. The more voters are reminded of these two facts between now and the election, the likelier we are to send Trump into permanent exile in Mar-a-Lago or wherever else he goes from here.

Gail: Well thanks to great reporting from our Times colleagues, we are able to hope that the first place he goes from here is bankruptcy.

Bret: From Here to Bankruptcy? Wasn’t that a film with Burt Lancaster and Montgomery Clift?

Gail: If it was a new version, we’d have to watch the scene where Trump goes to the beach and embraces Melania (or Stormy? Or someone in between?) in the waves. Definitely don’t want to go there.

Bret: In the meantime, it looks like Amy Coney Barrett is heading toward confirmation, and some progressives are advocating all manner of retaliation against Republicans for pushing the nomination through: ending the Senate filibuster for legislation, packing the Supreme Court, even pushing for statehood for Puerto Rico and the District of Columbia.

All this assumes Democrats win back the Senate and the White House. If they do, is any of that warranted or wise?

Gail: None of those would be on the top of my priority list, but I can understand why they’re coming up. The way the Republicans have handled court appointments is shocking, including their decision to break all the precedents they set during the Obama administration and ram Barrett through just days before the election.

Bret: Well, I wouldn’t object to any president’s right to nominate a justice at any point in his presidency if Mitch McConnell hadn’t held up Merrick Garland’s nomination to replace Antonin Scalia on transparently bogus grounds. But the hypocrisy rankles and reeks. If Senate Republicans had integrity — ha! — they would have held themselves to their own standard and held the nomination until after January.

Gail: The filibuster tradition — one Senator stopping a bill from coming up to vote by just refusing to stop speaking — calls up a lovely vision of Jimmy Stewart in “Mr. Smith Goes To Washington” talking for 23 hours in order to fight corruption and get children a summer camp. Classic movie, which was made in 1939. About 10 people under the age of 60 have seen it. We don’t live in a Mr. Smith world. We live in a world where the filibuster means Ted Cruz trying to stop health care legislation.

Bret: It would be a mistake to abolish the filibuster outright. I know lots of Democrats who privately regret Harry Reid’s decision, back when he was the Democratic majority leader in 2013, to end the filibuster for federal judgeships and executive branch appointments. That set up Republicans to end it for Supreme Court nominees a few years later. We’ve just wound up in a race to the bottom.

Gail: This can be a future topic without Donald Trump pushing us both to the same side.

As for Puerto Rico and the District of Columbia, it does seem to me we should let the people who live there decide. Everybody in Puerto Rico isn’t enthusiastic about a deal that would require the whole island to pay federal income tax. 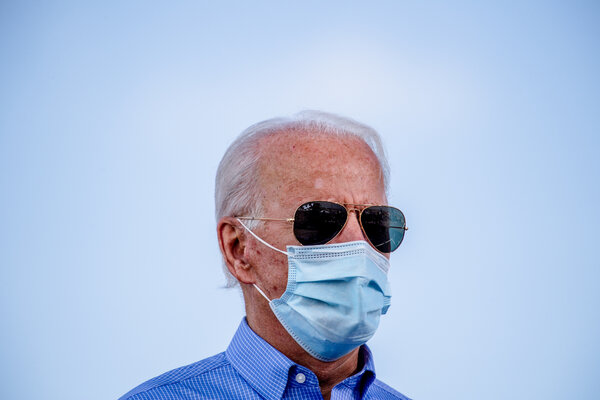 Bret: Again, if a Democratic Congress admits two states that are likely to elect Democratic Senators, Republicans will find a way to even the score. West Oklahoma? North Alabama? If Biden wins, his smart move will be to move the country swiftly in the direction of pre-Orangeman normality. He can propose traditional Democratic policies on health care, taxes and the environment. And then declare a two-week national detox from politics.

Gail: … And then Matt Damon could play him in a Mr. Smith remake.

Bret: At the risk of getting ahead of ourselves, how would you like to see President Biden’s first 100 days play out, assuming he wins and Democrats take the Senate?

Gail: The most important thing, short term, is to give the country hope that we’ll get on the road toward post-epidemic life. Every time you see Biden in a mask it’s sort of a promise that a new president could rally the country to a real war on coronavirus.

Bret: A president who isn’t at war with most of his scientific advisers would be a step in a better direction.

Gail: Yeah, and an inauguration speech that’s the exact opposite of Trump’s “American carnage” rant.

Bret: A speech memorably described by George W. Bush with the words, “That was some weird fertilizer.” Except Bush used a different word. Sorry, go on.

Gail: Hoping Congress manages to pass an economic recovery bill this month. If not, that has to be Biden’s second theme. Then wiping out Trump’s tax cut so the government has some money coming in.

Bret: Here I interrupt to wince.

Gail: We’re going to have a great time fighting about the agenda of a non-crazy president.

Presuming the Democrats win the Senate, all the stuff I mentioned seems pretty doable, although not exactly a walk in the park. Then, tackling the super-tough stuff. On the immigration front, just protecting the Dreamers from deportation would be a sign that we’re going to be going in the right direction.

Bret: If Trump had simply done a deal with Democrats, giving Dreamers a path to citizenship in exchange for funding his border wall, he could have fulfilled a promise to his voters while getting something positive done. He couldn’t because the Art of the Deal was yet another con.

Gail: Yeah, you wonder if the Art of the Deal was originally a code for canasta playing.

Those things are pretty sure to be on the top. I don’t know what he’ll do about climate change, but I suspect rather than some big legislative initiative, short-term he’ll just reinstate Obama’s regulation on car emissions.

Still, that’s a pretty large package. If I had a magic wand I’d add in gun control — maybe starting with improving the background checks.

Whew. How about you?

Bret: Obviously Biden’s legislative agenda is going to be very far from my own. But I would be thrilled if he affirmed America’s commitments to our traditional alliances, especially in Europe, smacked Russia hard for its election interference, bolstered relations with Ukraine, stood up for human rights everywhere, most particularly for Uighurs and the people of Hong Kong, and restored America’s status as a nation that welcomes and celebrates immigrants from every corner of the world. He’d also do a lot of good by completing the Trans-Pacific Partnership, which the Obama administration supported but failed to get past the finish line.

Oh, and speaking of the Senate: Did you hear Nebraska’s Ben Sasse tear into Trump during that phone call with his constituents? Too little, too late, in my view, though it’s always nice to hear what Republicans really think of their favorite president.

Gail: Yeah, thanks to Sasse we can point to a sitting senator from his own party who accused him of screwing up the coronavirus crisis, cozying up to dictators and white supremacists and drawing the water for a “Republican blood bath.”

Can’t get much better than that. Catch you again next week, Bret. God knows what will have happened by then.