Uncoupling his party from big business is a daunting task.

Mr. Eisinger is a senior reporter and editor at ProPublica. 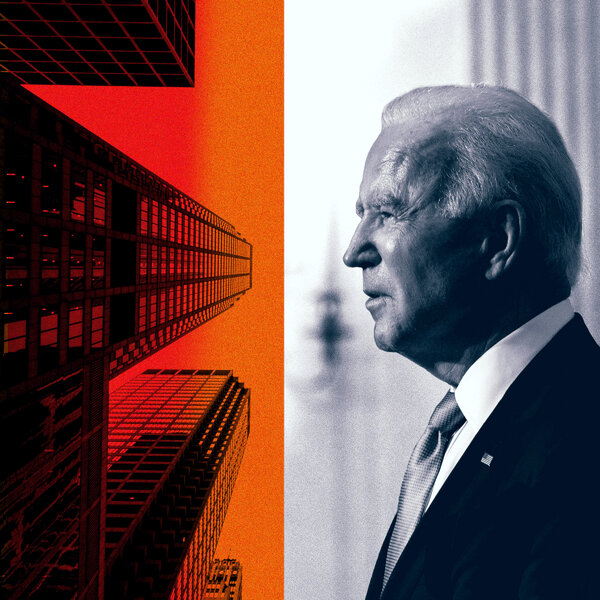 This article is copublished with ProPublica, a nonprofit newsroom that investigates abuses of power.

During the first weeks of the Biden administration, Americans have been treated to an unusual sight in Washington: regulators who believe in regulation. Donald Trump seemed to scour the earth for candidates who would produce the most liberal tears, appointing former lobbyists, financiers, ideologues and corporate titans.

President Biden’s appointees and nominees, by contrast, do not adamantly oppose the mission of the agencies they aspire to lead. More than that: Some of his early choices are among the most aggressive financial and corporate regulators of recent years.

“In 2008, the progressive voter candidate turned out to be extremely disappointing. This cycle, the candidate of restoration has been pretty good for progressives,” said Jeff Hauser, a Washington activist and founder of the Revolving Door Project who specializes in the workings of the federal bureaucracy.

Mr. Biden, he said, has absorbed the lesson that “not enforcing the law is no less political than actually implementing the law.”

Personnel is policy, goes the cliché. But it’s only a start. Persuading Mr. Biden, an avowed lifelong moderate, to reverse decades of corporate-friendly stances, even among Democratic administrations, will require more than a few aggressive appointments.

For an early indication of how the Biden administration differs even from its Democratic predecessors, look to the Office of Information and Regulatory Affairs, an obscure but powerful federal entity nested within the Office of Management and Budget charged with vetting federal rules. It’s the regulators’ regulator.

One of President Barack Obama’s OIRA chiefs, his friend and former University of Chicago Law School colleague Cass Sunstein, championed the use of cost-benefit analyses for new regulations — each new rule had to be “worth” how much would be spent to establish it. That rankled progressives, who contended Mr. Sunstein effectively blocked regulations by overemphasizing their costs and undervaluing their benefits. (Mr. Sunstein disputed the characterization.) That, in turn, helped corporations, which used the office as an appeals court.

Then came the Trump administration, which campaigned on a promise to slash what it viewed as “job killing” edicts. Over the past four years, the office played a significant role in helping to carry out initiatives such as Mr. Trump’s executive order requiring agencies to eliminate two existing regulations for each one they created.

After becoming president, Mr. Biden moved quickly, overhauling OIRA and instructing it to rethink how it approaches cost-benefit analyses, earning accolades from progressives. Now the mandate is to evaluate rules in a way that “fully accounts for regulatory benefits that are difficult or impossible to quantify.” Such words are the stuff of drinking songs in the halls of the Securities and Exchange Commission and the Environmental Protection Agency.

The enforcers at the commission will also be toasting Mr. Biden’s nomination of Gary Gensler, widely seen as an energetic financial overseer when he headed the Commodity Futures Trading Commission under Mr. Obama, to lead the once-storied S.E.C.

Rohit Chopra, the president’s choice for the top job at the Consumer Financial Protection Bureau, sits on the Federal Trade Commission. At the intellectual vanguard of his party’s stances on consumer fraud and antitrust issues, he has called for serious punishment of companies like Facebook that he views as having abused their competitive positions.

Even the new Treasury secretary, Janet Yellen, has generated tempered optimism. Although she did pull down millions in speaking fees from banks and other corporations, she is a late convert to the cause of aggressive financial regulation. As head of the San Francisco Fed more than a decade ago, she sided with Wells Fargo on a question of whether banks were stable enough to resume paying dividends after the financial crisis and bank bailouts. But by the end of her subsequent tenure as Federal Reserve chair, the Fed cracked down on Wells Fargo, leveling the harshest penalties against a big bank in generations.

This slate represents a noteworthy break from even the most recent Democratic administrations: In the view of advocates for a vigorous financial regulatory state, both Mr. Obama and President Bill Clinton operated from a defensive crouch, sheepish about active government and enamored of corporate self-regulation.