The House minority leader, Kevin McCarthy, issued a plaintive plea to his troops on Wednesday: Can’t we all just get along?

Congressional Republicans had two delicate items on their midweek to-do list involving the possible punishment of their own members:

1. Vote on whether to oust from leadership Representative Liz Cheney of Wyoming, the chamber’s No. 3 Republican, over her vote to impeach Donald Trump for his role in the Jan. 6 Capitol siege. “There has never been a greater betrayal by a president of the United States of his office and his oath to the Constitution,” Ms. Cheney had asserted on the eve of impeachment, provoking wrath among Trump loyalists.

In the matter of Ms. Cheney, Republicans declined to bow to their Trumpian cultists. During a conference meeting in the bowels of the Capitol Wednesday, Ms. Cheney refused to apologize for backing impeachment, even when members of the Freedom Caucus accused her of “aiding the enemy.” After some four hours of debate, the conference voted decisively, 145 to 61, to keep her as its chairwoman. That the balloting was secret enabled some of the more spinally challenged members to vote their conscience. 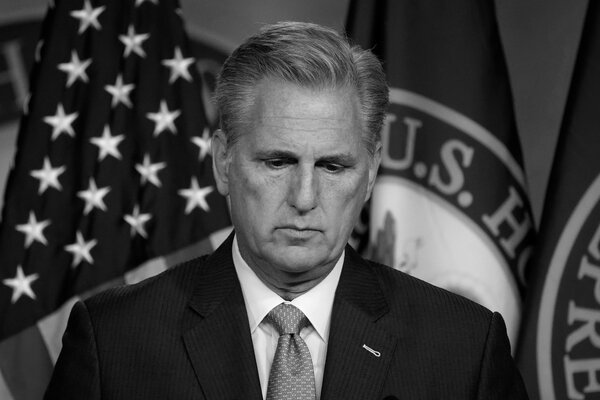 With Ms. Greene, the party’s fringe carried the day. Mr. McCarthy issued a statement assuring the public that the poison conspiracy theories she had peddled “do not represent the values or beliefs of the House Republican Conference.” And Ms. Greene apologized to colleagues for some of her battier statements and for putting the conference in a tough political spot. For this, she received a standing ovation.

In the end, Republicans refused to take any concrete action against her. They instead left it to the full House to vote Thursday on a resolution put forward by Democrats to remove Ms. Greene from two committees. The House voted 230 to 199 to do so, with 11 Republicans voting with Democrats.

This dodge allowed Mr. McCarthy to denounce the move as a “partisan power grab” by Democrats, while he and others hawk the usual slippery-slope gibberish. If they come for Ms. Greene today, they warn, what’s to stop them for coming for other Republicans tomorrow?

On the surface, these moves — or lack thereof — appear to pull in different directions. But they have the shared aim of preserving the fraying ties between the party’s angry, Trumpist base and its more traditional wing. “We need to unite for us to take the majority and govern,” Mr. McCarthy reportedly urged in defending Ms. Cheney.

There’s nothing unusual about this kind of big tent strategy. Such an approach was central to President Biden’s campaign and to House Democrats’ winning the majority in 2018. The key distinction here is that Republicans are making room in their tent not only for differing views on policy and politics but also for alternative versions of reality.

During the rules committee’s discussion of Ms. Greene on Wednesday, Republicans are said to have expressed distress at her behavior, but also argued against rushing to judgment. “We ought to follow a process that will allow us in a deliberative way to establish the facts and discuss the implications and move from there,” said Representative Tom Cole of Oklahoma, according to The Washington Post.

Deliberation is a wonderful thing. But among the pile of already established facts are videos of Ms. Greene holding forth on some of the most unhinged fictions percolating on the internet. In her social media postings, she has even endorsed the “frazzledrip” conspiracy theory. Warning: Do not Google that one if you have a weak stomach.

In his statement, Mr. McCarthy said he had made clear to Ms. Greene that “as a member of Congress we have a responsibility to hold ourselves to a higher standard than how she presented herself as a private citizen.” In a speech on the House floor Thursday, before the vote on the resolution, she acknowledged that the Sept. 11 attacks “absolutely happened” and that “school shootings are absolutely real” and insisted that she had walked away from QAnon — even as she charged that the media “is just as guilty as QAnon of presenting truth and lies.” Going forward, it will be interesting to see if the congresswoman expresses public contrition for the harm she has caused, or at the very least stops fund-raising off the controversy.

Some Senate Republicans have made their concerns public, including the minority leader, Mitch McConnell. On Monday, he cautioned that “loony lies and conspiracy theories” are a “cancer for the Republican Party.” Without naming names, he noted, “Somebody who’s suggested that perhaps no airplane hit the Pentagon on 9/11, that horrifying school shootings were pre-staged and that the Clintons crashed J.F.K. Jr.’s airplane is not living in reality.”

This may keep members of his conference placated for now. But it bodes ill for the efforts of serious-minded Republicans to reclaim their party from the MAGAverse.