Home » Analysis & Comment » Opinion | No One Expects Civility From Republicans

Perhaps you remember the terrible ordeal suffered by the White House press secretary Sarah Huckabee Sanders at the Red Hen in 2018. She was awaiting her entree at the Virginia farm-to-table restaurant when the co-owner, appalled by Sanders’s defense of Donald Trump’s administration, asked her to leave. This happened three days after the homeland security secretary at the time, Kirstjen Nielsen, was yelled at for the administration’s family separation policy as she tried to dine at a Mexican restaurant in Washington.

These two insults launched a thousand thumb-suckers about civility. More than one conservative writer warned liberals that the refusal to let Trump officials eat in peace could lead to Trump’s re-election. “The political question of the moment,” opined Daniel Henninger in The Wall Street Journal, is this: ‘Can the Democratic Party control its left?’”

Somehow, though, few are asking the same question of Republicans as Trump devotees terrorize election workers and state officials over the president’s relentless lies about voter fraud. Michigan’s secretary of state, Jocelyn Benson, described her family’s experience this past weekend: “As my 4-year-old son and I were finishing up decorating the house for Christmas on Saturday night, and he was about to sit down and to watch ‘How the Grinch Stole Christmas,’ dozens of armed individuals stood outside my home shouting obscenities and chanting into bullhorns in the dark of night.” 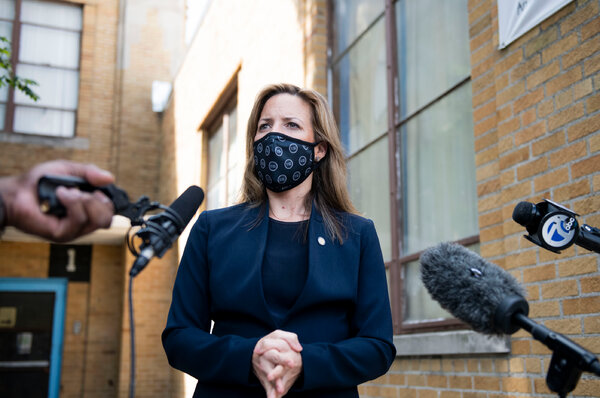 So far, what happened to Benson doesn’t appear to be turning into a big cultural moment. There’s no frisson of the new about it; it’s pretty routine for Trumpists to threaten and intimidate people who work in both public health and election administration.

The radically different way the media treats boundary-pushing on the left and on the right is about more than hypocrisy or double standards. It is, rather, an outgrowth of the crisis of democracy that shields the Republican Party from popular rebuke. There’s no point asking if the G.O.P. can control its right. It has no reason to.

Democrats have just won the popular vote in the seventh out of the last eight presidential elections. In the aftermath, analysts have overwhelmingly focused on what Democrats, not Republicans, must do to broaden their appeal. Partly, this stems from knee-jerk assumptions about the authenticity of the so-called heartland. But it’s also just math — only one of our political parties needs to win an overwhelming national majority in order to govern.

Republican extremism tends to become a major story only when there are clear electoral consequences for it. Pat Buchanan’s demagogic culture war speech at the 1992 Republican National Convention was seen, at the time, as shocking, and elite Republicans later believed it helped George H.W. Bush lose the election. Twenty years later, after Mitt Romney’s defeat in 2012, Republicans undertook an “autopsy” and went public with the results of focus groups calling the party “scary,” “narrow-minded” and “out of touch.” There were always zealots in the modern Republican Party, but there were also forces interested in quarantining them.

After that autopsy, Reince Priebus, then the Republican Party chairman, called for a more “inclusive” G.O.P., saying, “Finding common ground with voters will be a top priority.”

Trump would prove that wasn’t necessary. In 2016, he got a smaller percentage of the popular vote than Romney did four years earlier, but still won the Electoral College. And while widespread revulsion toward Trump was a problem for him this November, down-ticket Republicans performed far better than almost anyone expected.

As a result, the effect of right-wing fanaticism on mainstream public opinion has become a non-issue. It doesn’t matter if Biden voters don’t like paranoid militants, many of them armed, menacing civil servants. The structure of our politics — gerrymandering in the House and the rural bias in the Senate — buffers Republicans from centrist backlash.

One thing would change this dynamic overnight: a Democratic victory in the Georgia Senate runoffs on Jan. 5. Republicans might learn that there’s a price for aligning themselves with a president trying to thwart the will of the electorate. They might regret the arrogance of Senator David Perdue, who didn’t deign to show up for a Sunday night debate with his Democratic opponent, Jon Ossoff. Trumpism might come to be seen as an electoral albatross, and Republicans would have an incentive to rejoin the reality everyone else operates in.

But unless and until that happens, few will be able to muster much surprise when Republicans condone the most outrageous right-wing thuggery, because few will expect anything else.

The uproar over shunning Sanders was an outgrowth of an old liberal quandary — how a tolerant society should treat those who conspire against tolerance. The people screaming outside Benson’s house raise an entirely different question, about how long our society can endure absent any overlapping values or common truths. You can condemn an anti-democratic party for behaving anti-democratically, but you can’t really argue with it.

Opinion | How to Vaccinate 100 Million Americans in 100 Days