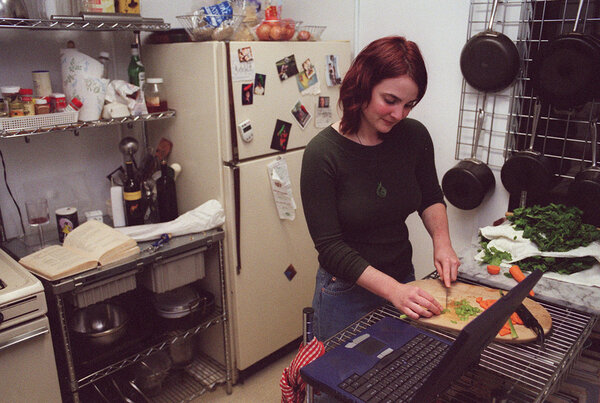 Mr. Bruni is a contributing Opinion writer who was on the staff of The Times for more than 25 years.

Did Julie Powell catch a wave or set it in motion? Seize a moment or create it? That’s often the question about people who define their times as vividly as she did. All I know is that there was a line of demarcation, a Before Powell and an After Powell, and that following The Julie/Julia Project, which debuted in 2002, I noticed a new breed of dreamer, who came to the Big City not with a glossy headshot and dancing shoes but with a whisk and a flourless chocolate cake recipe.

And an internet connection. Powell, who died last week at the age of 49, straddled two trends, the proliferation of blogging and the surging interest in all things culinary, and she mingled them ingeniously in her Salon.com chronicle of one highly caloric year and one titanically ambitious task: to blanch, baste and blunder her way through the entirety of Julia Child’s “Mastering the Art of French Cooking,” though she had a modest Queens kitchen and a modest clerical worker’s budget.

Powell completed that challenge, with many pratfalls and much profanity along the way. She found a degree of fame. And she memorialized her accomplishment in a book, “Julie & Julia,” that went on to sell more than a million copies.

I never met her, but I owe her, and not because I had the thrill of a brief, uncredited appearance in the movie version of that book, directed by Nora Ephron, who occasionally tucked her friends into her films as a gift and a goof. Like so many others who found purchase in the world of food over the past 20 years, I was indebted to Powell for democratizing that world, for demystifying it, for showing that it could and perhaps should be breached by people who came to it not with a gastronome’s formal training and fancy vocabulary but with passion, with personality, with Tums.

The year after Powell completed her Child marathon, I began an epicurean odyssey of my own, serving as the restaurant critic of The Times from June 2004 through August 2009. (That’s how I became friendly with Ephron, who liked to trade restaurant anecdotes and intelligence with me.) My appointment as critic was in many ways a non sequitur: I’d spent the previous two years as a foreign correspondent based in Rome, and the four years before that as a political reporter. I was more thoroughly versed in the making of legislation than in the making of sausage (though there’s a metaphoric kinship there).

But Powell and others like her had changed the terms of food writing, which was turning less preachy, more populist. The spirit of the times and of The Times was that curiosity mattered as much as erudition, that too much emphasis on classicism had too much classism in it. I’d never taken cooking lessons, but my hungry life had been one long eating lesson. I had a Ph.D. in gluttony. That was credential enough.

Before Powell, people certainly talked and argued about restaurants, and rushed to the newest ones. But After Powell, the number and variety of such people increased, as did their quickness to record their every judgment — their every bite — on the internet.

Before Powell, kitchen amateurs certainly emulated kitchen experts, boasting of their efforts and, when all went well, their accomplishments. But After Powell, this was less sideline habit than rite of passage for many young and relatively privileged Americans, who no longer treated a subpar oven and a dearth of counter space as a get-out-of-roasting-free card.

Powell wasn’t the engine of these awakenings, but she was an emblem of them, and in her way, she was an influence in the transformation of food into a new kind of playground, a new type of stage, crowded by creative, enterprising and just plain ravenous people who wanted to maximize the pride and the pleasure to be had in making and consuming delicious things.

In Ephron’s movie, I sit on a rooftop in Queens and clap for the glistening duck that Powell, played by Amy Adams, carries to the dinner table. It’s the final dish on her Child checklist. She’s done.

In life, I sit in the shadow of Powell, the patron saint of unconventional epicures, and applaud her daring and her example. What an appetite she had. What adventures she inspired. They’ll go on and on.

Opinion | In 2022, Reality Has a Conservative Bias