America let some of the worst fears of the founders come true.

We didn’t believe that a demagogic tyrant-worshiper could rise to the presidency.

The founders of this country worried obsessively about the rise of a demagogue, and the power of foreign influence on our democracy. And yet somehow, over the years, after centuries of American presidents behaving in ways that at least demonstrated a fealty to the country and its institutions and the power of precedent and legacy, those fears waned to a whisper.

Having a demagogue, partially installed by a Russian disinformation campaign no less, who exalted our enemies in the world and hammered our friends, was somewhat unthinkable. This was America. We would only go so far. We might race up to the precipice, but we would never hurl ourselves into the abyss. Wrong.

With the election of Donald Trump, America did the unthinkable, shocking itself and the world: It put the most powerful country in the world under the control of a lying, grifting, shady carnival ­­­­­conductor. He had no experience in governance and no expertise. His entire life was a game of smoke and mirrors, double talk and double-dealing. 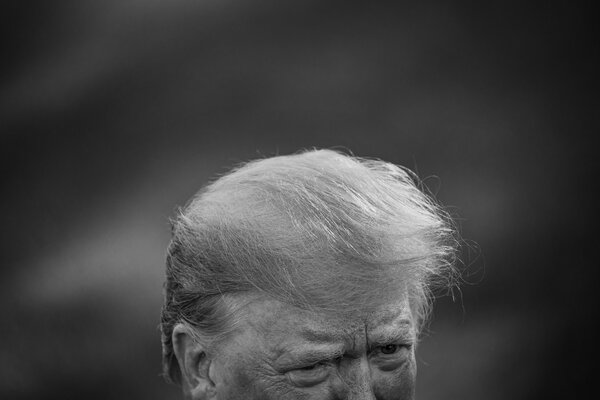 Even Trump, not a student of history or much else, didn’t seem to grasp the awesome power he possessed until he systematically started to test all the fences supposedly restraining him, only to realize that the only thing holding many of them up was customs and conventions. Most could be run through or pushed down.

It was like a scene in the film “Jurassic World” where the scientist created a hybrid, Frankenstein dinosaur because people got bored of the conventional ones. Well, the dinosaur was clever enough to break out of its cage and run through the park, killing everything in sight. As one of the scientists said: “You made a genetic hybrid. Raised it in captivity. She is seeing all of this for the first time. She does not even know what she is. She will kill everything that moves.” He continued, “She is learning where she fits on the food chain and I’m not sure you want her to figure that out.”

Trump realized the power of the presidency, that it was uniquely at the top of the food chain, and so began his rampage.

We didn’t believe that in this era we could have a president who could be so regressive on issues of white supremacy, white nationalism and xenophobia.

To be sure, there have been other presidents more racist than their predecessors.

Andrew Johnson assuming the presidency after Abraham Lincoln comes to mind. Although Lincoln had professed his white supremacy during the Lincoln-Douglas debates, he led the nation to emancipation and into Civil War in part over the issue of slavery. Johnson’s racist reconstruction plan after the war excluded Black electoral and governing participation, led to the rise of the Black Codes and led to his impeachment.

Lyndon B. Johnson being followed by Richard Nixon comes to mind. As a senator, Johnson had shepherded the Civil Rights Act of 1957, and as president he pushed through the Civil Rights Acts of 1964 and 1968. In addition, he nominated the first Black justice to the Supreme Court: Thurgood Marshall. Nixon on the other hand, was different. As Tim Naftali, an associate professor of history at N.Y.U., wrote last year in The Atlantic: “Nixon believed in a hierarchy of races, with whites and Asians much higher up than people of African descent and Latinos. And he had convinced himself that it wasn’t racist to think Black people, as a group, were inferior to whites, so long as he held them in paternalistic regard.”

But, in some ways, Americans came to see these occasional regressions as more minor — a hiccup, a stutter step in which the country took a small step back among much greater strides forward. We were not prepared for what Trump delivered: a generational retreat into darkness.

We had not seen a modern president so openly and blatantly court and even defend racists and xenophobes. We had not seen one refuse to clearly condemn white supremacist hate groups, instead retreating to a position of false obliviousness when condemnation was demanded. We have not seen a recent president who would stoop so low as to separate immigrant children from their parents, apparently with no plan to reunite them, as a matter of unwavering policy.

These are but two examples. But the list is legion. I could enumerate them until my fingers blistered. But they would all illustrate the same point: We, America, let our guard down for a campaign cycle, believing, surely, that the most qualified woman to ever run would defeat the least qualify man to do so. We didn’t vote with the intensity the emergency required. And in doing so, we allowed the country to be dragged to the brink of ruin.

We are now living the reality that the founders feared and that women, minorities and immigrants hoped was an artifact of former times.

The Times is committed to publishing a diversity of letters to the editor. We’d like to hear what you think about this or any of our articles. Here are some tips. And here’s our email: l[email protected].