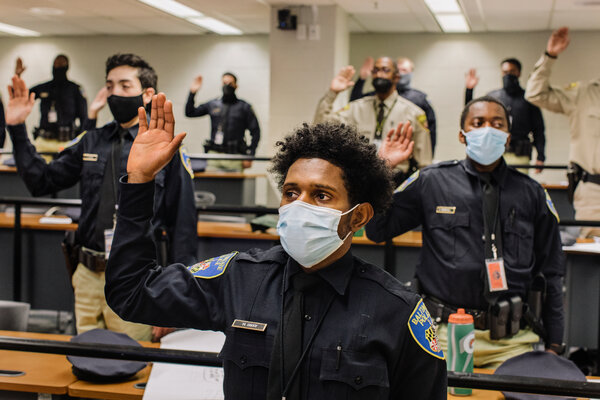 “We should all agree,” President Biden declared in his State of the Union address on Tuesday:

It’s not hard to understand why this paragraph was in the speech. For more than a year, moderate and conservative Democrats have been in a state of panic over the impact of “defund the police” — a controversial slogan from the George Floyd protests of 2020 — on their electoral fortunes.

Despite slim evidence of any particular impact on voters, and despite even slimmer evidence that “defunding the police” is a priority for much more than a small handful of elected Democrats, anger and consternation over the slogan continues to shape political and strategic thinking within the Democratic Party.

What doesn’t, somehow, shape political and strategic thinking about law enforcement within the Democratic Party is the reality of police budgets in this country. The president’s rhetoric notwithstanding, police departments in the United States are not actually strapped for funds.

Let’s just look at the numbers. Despite some cuts, according to a 2021 analysis of police budgets in the nation’s 50 largest cities by Bloomberg CityLab, law enforcement spending as a share of general expenditures rose slightly from 13.6 percent to 13.7 percent from 2020 to 2021, even as many cities cut spending in other areas as a result of the pandemic. And out of 42 major cities where Democrats gained votes from 2016 to 2020, more than half increased police spending for fiscal year 2021. Some cities that cut spending, or pledged to cut it, later reversed or restored that funding.

In 2020, for example, New York City’s former mayor, Bill de Blasio, pledged to cut $1 billion from the New York Police Department’s $6 billion budget. In the end, most of these cuts never materialized. Instead, de Blasio approved, for fiscal year 2022, a $200 million increase in police spending.