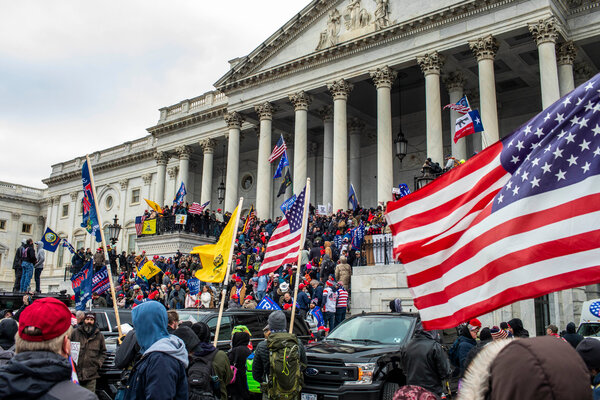 It is appalling what our country has become. There have always been dissension and clashes between the two political parties, but there has rarely been anything as utterly ugly as what is going on today.

That a young man at a rally can ask when can we start killing Democrats and get a round of applause is a travesty. Threats of violence have become the norm in the Republican Party, fueled by the unscrupulous twice-impeached promoter of the Big Lie.

Because of her they are getting death threats. Their biggest crime was daring to vote for a bill that would benefit all Americans, instead of toeing the party line. The Republicans who stand by and do nothing and say nothing are equally guilty in their silence.

There is a war on our democracy. Violence is taking over our government. Our elected officials should do the job they were elected to do, uphold the Constitution and govern for the good of the people.

So Representative Paul Gosar of Arizona tweeted an anime video altered to show him killing Representative Alexandria Ocasio-Cortez and swinging two swords at President Biden. When questioned, Mr. Gosar’s office offered this response: “It is a symbolic cartoon. It is not real life.” Well, duh!

Your report gives grudging acknowledgment that “elements of the left have contributed to the confrontational tenor of the country’s current politics,” but then proceeds to document only statements by Republicans.

I am thinking of a statement by a Democratic representative, Maxine Waters, during the trial of Derek Chauvin over George Floyd’s death: “We’ve got to get more confrontational. We’ve got to make sure that they know that we mean business.” This pales in comparison with recent comments by a Black Lives Matter leader, Hawk Newsome, about possible changes in policing: “There will be riots, there will be fire and there will be bloodshed.”

It isn’t only talk. The looting and fires in New York City in June 2020 were not by Republicans. And let’s not forget Kenosha, Portland and Minneapolis.