Good morning. Previous holidays have led to virus outbreaks, and another big holiday arrives this weekend. 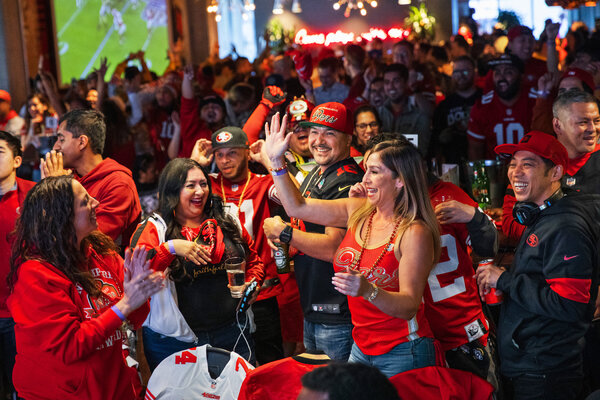 Coronavirus cases in the U.S. have surged after almost every major holiday of the past year, including Memorial Day, Labor Day, Thanksgiving and Christmas. This weekend brings another major holiday, even if it’s not an official one: Super Bowl Sunday. And there is reason to worry that it will turn into Superspreader Sunday.

Polls show that a significant number of people plan to attend parties. Two separate surveys — one by Seton Hall University and one by the National Retail Federation — found that nearly 30 percent of adults said they would attend a gathering at someone’s home or watch the game at a restaurant or a bar.

If anything, this weekend may be more dangerous than most holidays. Super Bowl parties are usually indoors and can involve more households than a holiday meal. This year’s game is also happening when contagious new variants of the virus have begun to spread.

There is precedent for sporting events leading to outbreaks. Health officials in Los Angeles believe that gatherings to watch playoff games last fall involving the Lakers (who won the N.B.A. title) and Dodgers (who won the World Series) accelerated the virus’s surge in Southern California.

The next several weeks feel especially important. Cases have been falling sharply, and the pace of vaccination — though still maddeningly slow — is picking up. We have reached a potential turning point, when Covid-19 deaths could start declining and never again reach their earlier highs.

“We need to double down,” Dr. Rebecca Wurtz of the University of Minnesota School of Public Health told me. “Here’s our chance to turn the corner, and we really need to seize it.”

(My colleague Tara Parker-Pope has detailed advice about what’s safe.)

I’ve heard from many readers who want this newsletter to continue paying attention to vaccine news. So here goes: There have been more encouraging developments.

AstraZeneca and the University of Oxford released data showing that none of the 12,408 people who had received a vaccine shot died from Covid symptoms or were hospitalized with them. That’s consistent with earlier results for that vaccine, as well as initial results for four other vaccines — from Johnson & Johnson, Moderna, Novavax and Pfizer.

Researchers found that the AstraZeneca vaccine also slows the transmission of the virus, underscoring the importance of mass vaccination as a path out of the pandemic.

A peer-reviewed study published in The Lancet, a British medical journal, found that Russia’s vaccine, known as Sputnik V, also offered complete protection against serious Covid illnesses. Dr. Angela Rasmussen of Georgetown University called it “great news” and added, “We need more vaccines globally.” (Related: The New Yorker’s Joshua Yaffa and The Times’s Andrew Kramer, who are both based in Moscow, have written about why they got the Sputnik vaccine.)

An important caveat: The vaccines’ protection doesn’t kick in immediately. It often takes at least a couple of weeks.

The British government said that a variant of the virus first observed there had the potential to make the vaccines less effective. But that’s less alarming than it may sound. For now, the concern is hypothetical: No data shows the vaccines to be ineffective on the British variant. Even if they are less effective, other evidence suggests that modest levels of vaccine protection may almost always be enough to downgrade Covid to an ordinary flu.

“Lately, when I talk to reporters, they expect me to be very worried about Covid variants. But I’m not,” Dr. Ellie Murray of the Boston University School of Public Health wrote on Twitter. “Why? Because we know what works to control Covid.” She is more worried about “the lack of action” to promote social distancing, encourage mask wearing and accelerate vaccination, she added.

The Senate voted along party lines on a procedural step that will let Democrats avoid a filibuster on President Biden’s coronavirus relief package and pass it with a straight majority.

Biden signed three executive orders on immigration, including one that aims to reunite migrant families that the Trump administration separated. Officials and immigration advocates cautioned that the changes would not happen immediately.

The Biden administration announced new efforts to speed up vaccinations, including sending doses to retail pharmacies.

In their first impeachment filings, Donald Trump’s lawyers denied that he incited the Jan. 6 assault on the Capitol and argued that the Constitution did not permit the Senate to try a former president.

House impeachment managers asserted that history supported the Senate’s right to try a former president and said that Trump was “singularly responsible” for the riot.

The body of Brian Sicknick, the Capitol Police officer who died from injuries sustained during the riot, will lie in honor at the Capitol today.

New York prosecutors are investigating Steve Bannon, weeks after Trump pardoned him. Bannon could face charges of defrauding donors to the border wall.

A shootout in South Florida killed two F.B.I. agents and injured three others. They were investigating violent crimes against children.

Jeff Bezos is stepping down as C.E.O. of Amazon and will become executive chairman. Andy Jassy, who runs Amazon’s cloud computing division, will succeed him.

GameStop’s stock price is down 81 percent from its peak last week, quickly wiping out many investors’ wealth.

A Morning Listen: Tighter border enforcement has driven migrants to the sea in dangerous attempts to reach California. Listen to the narrated Times Magazine account.

From Opinion: “To my own astonishment, I’m rooting for Brady” in the Super Bowl, Frank Bruni, a Times Opinion columnist, writes. Here’s why.

Lives Lived: Tom Moore, a British Army veteran nicknamed “Captain Tom,” became a symbol of determination early in the pandemic when he raised $45 million for hospitals by walking laps in his garden. He died at 100, after having recently been hospitalized with Covid.

A superteam in Brooklyn

The Brooklyn Nets, who have long struggled to escape the shadow of the nearby Knicks, have put together a lineup so loaded with talent that they resemble a musical supergroup — basketball’s answer to the Three Tenors, the Traveling Wilburys or Them Crooked Vultures.

Last month, the Nets made a blockbuster trade to get James Harden, the N.B.A.’s top scorer. He joined a team that already featured two stars in Kevin Durant and Kyrie Irving. The combo, the Times basketball writer Marc Stein told us, is “the most ambitious assemblage of offensive talent in N.B.A. history.”

Two years ago, Harden averaged more than 36 points a game; only Michael Jordan and Wilt Chamberlain have exceeded that. Durant has been the highest-scoring player in the N.B.A. four times — a number that, again, only Jordan and Chamberlain have topped. Irving is a six-time all-star who won a championship in Cleveland.

Yet their success is not guaranteed. In trading for Harden, the Nets gave up a lot, including some of their best defenders. “Defense and depth will matter eventually,” Marc noted. “You can’t just score your way to a championship in the N.B.A.”

“But,” he added, “the Nets have never mattered more in New York.”

The Golden Globes nominations are this morning. Here’s what to expect.

Chang-rae Lee’s novel“My Year Abroad” follows a college student after a harrowing experience. It is “considered and elegant, formal and philosophical,” the critic Dwight Garner writes, but also “long and draggy.”

The New York Times Magazine’s David Marchese spoke to Jodie Foster about directing and why she’s ambivalent about the movie industry.

The pangram from yesterday’s Spelling Bee was impalpable. Today’s puzzle is above — or you can play online.

P.S. A hidden haiku from The Times’s review of a new Mike Nichols biography, on the book’s many celebrity cameos: “Everybody who / was anybody is here / steaming up the glass.”

Today’s episode of “The Daily” is about a mother who tracked down her daughter’s kidnappers. On “The Argument,” Ross Douthat and Michelle Goldberg talk about what they’ve learned arguing with each other for the past two years.

Opinion | Can the Unvaccinated Be Persuaded?