Good morning. Britain cut child poverty in half. Is the U.S. about to do so? 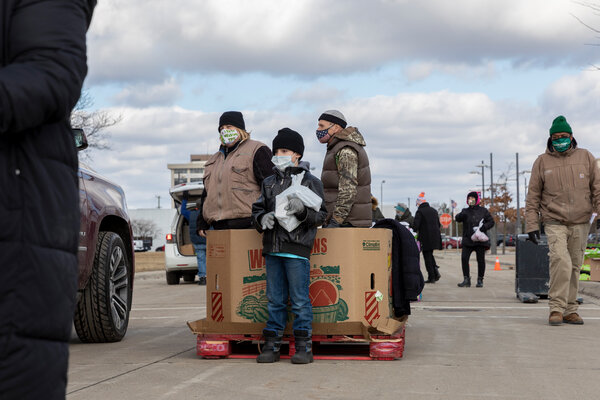 Twenty-two years ago, Prime Minister Tony Blair announced an ambitious plan to fight child poverty in Britain. At the time, more than 25 percent of British children lived in poverty.

At the heart of the campaign were government payments to families with children. The rationale was similar to that of benefit programs for older adults, like Social Security: Society has an interest in supporting people who cannot work. And in the case of children, poverty can cause damage that lasts for decades.

The campaign by Blair and the Labour Party radically changed the situation. Eight years after his announcement, the child poverty rate had fallen by half. “It’s not rocket science,” Jane Waldfogel, a Columbia University professor who has written an academic book on Britain’s war on poverty, told me. “You give families money, and kids benefit.”

The pandemic relief bill that President Biden is on the verge of signing contains a child benefit plan that resembles Blair’s in its ambition. Most families will receive $3,600 a year (paid monthly) for each child age 5 or younger, and $3,000 a year per older child. Other provisions in the bill will further lift income for poor families. The benefits phase out for many households making six-figure incomes.

Luke Shaefer, a University of Michigan professor, told the Times columnist Nicholas Kristof that the child benefit was “the most transformational thing” in the legislation. My colleague Jason DeParle, who has covered poverty for years, wrote that “the child benefit has the makings of a policy revolution.” (Jason goes into more detail on today’s episode of “The Daily.”)

Over all, the legislation will reduce the child poverty rate this year to about 6 percent from about 14 percent, according to projections by the Center on Poverty and Social Policy at Columbia. The biggest declines will be for Black and Hispanic children.

What about unintended consequences?

The idea of a child benefit has gained support from both progressives and conservatives. Many on the political left see it as a way to reduce economic inequality and increase opportunity. On the political right, Jason explains:

Libertarians like that it frees parents to use the money as they choose, unlike targeted aid such as food stamps. Proponents of higher birthrates say a child allowance could help arrest a decline in fertility. Social conservatives note that it benefits stay-at-home parents, who are bypassed by work-oriented programs like child care.

Christopher Buskirk, the editor of the conservative publication American Greatness, says that younger conservatives are especially supportive of the idea. People under 50, he explains, are “the ones feeling the brunt of the brutal slowdown in real wage growth that started in the 1970s.”

The most common criticism is that the plan is a form of welfare that could reduce people’s incentives to marry or work. “Monthly cash payments should go only to working households,” Oren Cass, the founder of the policy group American Compass, writes in a Times Opinion article. (Cass suggests exceptions for the recently unemployed and parents who take leave after a baby’s birth.)

But the evidence suggests that these concerns may be largely theoretical. In Britain, the changes to child benefits increased employment among single mothers, Waldfogel said. And when a panel of U.S. experts reviewed the research for the National Academy of Sciences, it found that a universal child benefit would have a “negligible” effect on employment.

“You can’t live on it,” Megan Curran, a research scientist at the Center on Poverty and Social Policy, told me.

Ultimately, the biggest uncertainty about Biden’s child benefit may not be its impact but its durability. The bill headed to his desk will establish the program for only one year. Its advocates hope that it proves so popular — partly because it’s nearly universal — that Congress will make it permanent. Yet that remains very much in question.

Fully vaccinated people can gather indoors in small groups without taking precautions but should continue to wear masks in public, the C.D.C. said. Vaccinated people can also get together with members of one unvaccinated household, as long as no one has a complicating health risk. (Here are the full guidelines.)

All K-12 educators in the U.S. are now eligible for a vaccine.

“I was so nervous”: After a year of school online, students talk about returning to the classroom.

Many people who experience long-term Covid symptoms did not feel sick when they were first infected, a study says.

Biden will deliver his first prime-time address on Thursday, marking a year since the pandemic upended life in the U.S.

The number of children detained at the U.S.-Mexico border has tripled. The Biden administration is struggling to house them.

The Biden administration will reassess Trump-era regulations that gave greater protections to college students who were accused of sexual misconduct.

Senator Roy Blunt of Missouri said he would not seek re-election next year. He is the fifth Republican senator to announce his retirement; no Democrats have done so.

Conceived in 2019 as an attack machine against Donald Trump by dissident Republicans, the Lincoln Project hit upon a geyser of donated cash. Then it began to unravel.

Cornel West, a professor of African-American studies and a progressive activist, is abandoning his quest for tenure at Harvard.

Police officers and Black Lives Matter activists danced together last spring in rural Virginia. But what appeared to be racial progress has turned into bitter conflict.

From Opinion: New columns by Jamelle Bouie and Paul Krugman.

Lives Lived: As a lawyer with a moral compass forged in part by the civil rights movement of the 1960s, Priscilla Read Chenoweth spent seven years and tens of thousands of dollars of her own money to exonerate a young stranger wrongly convicted of murder. She died at 90.

The N.F.L. will choose between skill and luck

The National Football League has never quite figured out how to create a fair version of overtime. When a game is tied at the end of the fourth quarter, a coin flip determines which team gets the ball first in overtime. The winner of the coin flip then has an advantage — one that has been decisive in several recent playoff games.

Now, there may be a solution, thanks to a rule change proposed by the coaching staff of the Baltimore Ravens. This one is called “spot and choose”: One team would choose the yard line where the ball would be spotted at the start of overtime. The other team would decide whether it wanted to be on offense or defense.

As Matt Weiss, a former Ravens coach wrote on Twitter: “If you have kids you know the only fair way to split a piece of cake: 1 kid cuts the piece; the other one chooses.”

Football fans and writers have suggested versions of this idea for years. It would eliminate randomness and add a strategic element to overtime, as one team tried to figure what offer to make to their opponent and the other had to decide whether to accept the ball or play defense. “This sounds complicated at first, but it’s actually a really fun idea,” ESPN’s Mina Kimes wrote. USA Today’s Steven Ruiz argued: “There is no good reason for the N.F.L. to not adopt this rule.”

For it to happen, at least 24 of the league’s 32 teams need to vote for it at a meeting this month. Regardless, it will be too late for the Atlanta Falcons, who lost the coin flip at the Super Bowl four years ago and then lost the game to the New England Patriots without ever having the ball again.

Diary of a Song

Beyoncé, Billie Eilish, Megan Thee Stallion and more will face off at the Grammys on Sunday for record of the year. The Times’s pop music team breaks down the category on “Diary of a Song.”

Imbolo Mbue’s second novel, “How Beautiful We Were,” is set in a fictional African village ravaged by an American oil conglomerate. “What starts as a David-and-Goliath story slowly transforms into a nuanced exploration of self-interest,” Omar El-Akkad writes in a review.

The pangrams from yesterday’s Spelling Bee were happening and heaping. Here is today’s puzzle — or you can play online.

P.S. The Times and the National Center on Disability and Journalism have created a fellowship to cover disability in America. If you know young journalists who might be interested, they can apply here.

Today’s episode of “The Daily” is about the child benefit. On “Sway,” Gen. John Raymond of the Space Force.