Good morning. For a break from the news, check out The Times’s annual list of 100 notable books. 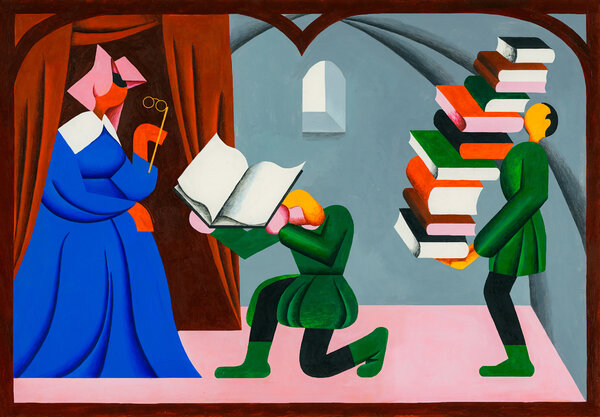 Every November, after the editors of The Times Book Review have wrapped up their big end-of-year issues, they immediately turn their attention to the following year. They start by creating a working list of nominees for the next iteration of 100 Notable Books — the one that will be published almost a year later.

In the subsequent months, the editors add to the list, knowing all the while that they will need to conduct a ruthless winnowing at the end, down to 50 books of fiction and 50 of nonfiction, spanning every genre. “It’s a lot of triage and hard choices,” Pamela Paul, the Book Review editor, told me.

Today, Pamela and her colleagues released the new list. The Times has published a version of it every year since 1968 (although the early ones were longer), and publishers say it often has a big effect on a book’s sales.

The 2020 list has both timeless and timely qualities. It includes novels that could have come out any year — by Hilary Mantel, J.M. Coetzee, Megha Majumdar and Lily King — as well as nonfiction about Winston Churchill, Newt Gingrich, Malcolm X and Ronald Reagan.

But the list also reflects the biggest themes of 2020. “Racial justice, immigration, ideological divisions, identity and economic disparities permeate both the fiction and nonfiction sides of our list,” Pamela says. There are books about violence against Black Americans, the political alienation of white working-class Americans and more.

There are even a few books that manage to speak to life during the pandemic, if indirectly — like Ben Ehrenreich’s memoir of solitary living in the American West. (And, yes, a more famous memoir, the one by Barack Obama, also made the list.)

I’ll offer my own endorsement from the 100: “Deaths of Despair and the Future of Capitalism,” by Anne Case and Angus Deaton. It covers arguably the single most alarming development in American life, one that helps explain the frustration pulsing through the country: In many communities, people are not living as long as their parents did.

Up next from the Book Review is the release of the year’s 10 best books, on Monday morning. Readers will be able to watch the announcement here.

The number of confirmed coronavirus cases in several U.S. states is growing more rapidly than anywhere else in the world. That was also true early in the summer, before Spain, France and some other countries overtook the U.S. in the late summer and early fall.

The World Health Organization said Europe’s latest restrictions appeared to be slowing the spread of the virus. New cases there have dropped about 10 percent in the past week.

The Centers for Disease Control and Prevention urged Americans not to travel for Thanksgiving, saying the safest way to celebrate was “at home with the people you live with.” (Here’s what more than 600 epidemiologists are doing. A common theme: staying home.)

U.S. airlines still expect Thanksgiving week to be one of the busiest periods for air travel since the spring.

UNICEF, the United Nations agency for children, said school closures were helping to create a “lost generation” of students while doing little to slow the spread of the virus.

Steven Mnuchin, the Treasury secretary, said he did not plan to extend several emergency loan programs that are set to expire at the end of the year. The Federal Reserve said it preferred that the programs continue.

In an extraordinary step, President Trump summoned Republican members of the Michigan Legislature to the White House, as part of his effort to subvert the Electoral College process. President-elect Joe Biden leads in Michigan by 158,000 votes.

Business leaders in Washington, D.C., and on Wall Street are increasingly calling on the Trump administration to begin the transition.

And Senator Mitt Romney of Utah, a Republican, excoriated the president’s attempts to overturn his defeat. “It is difficult to imagine a worse, more undemocratic action by a sitting American President,” Romney said.

Senator David Perdue, a Republican facing a January runoff in Georgia, made profits from a Navy contractor’s stock while overseeing the naval fleet.

In the U.S., the rate of H.I.V.-related deaths fell by about half from 2010 through 2018. The declines were smaller for women and Black Americans.

U.S. prosecutors have declined to pursue cases against thousands of people who were arrested at demonstrations against police brutality this summer, concluding that protesters were exercising their civil rights.

Two fraud inquiries — one criminal and one civil — into Trump and his businesses are now looking at tax deductions taken on consulting fees, some of which appear to have gone to Ivanka Trump.

The Justice Department carried out the first of three executions scheduled before the end of Trump’s term. Biden has said he will work to end the use of capital punishment by the federal government.

Klay Thompson of the Golden State Warriors, one of the N.B.A.’s best shooters, will miss the upcoming season after tearing his Achilles tendon in a pickup game.

And one more piece of book news: Douglas Stuart won the Booker Prize for his autobiographical novel “Shuggie Bain,” the story of the lonely gay son of an alcoholic mother in 1980s Scotland.

Modern Love: A grandmother’s love fills the void for a writer who lost her mother at a young age.

Notable birds: A worker setting up the Christmas tree in Rockefeller Center in Manhattan this week came eye to eye with a tiny owl that had accidentally gotten stuck in the branches. (The owl was thirsty and hungry, but mostly fine.) And now that we’re on the topic: Central Park has a new celebrity bird.

Lives Lived: Drew S. Days III was solicitor general of the United States and the first Black American to lead the civil rights division of the Justice Department. Born in the segregated South, he attended and then taught at Yale Law School. He died at 79.

Subscribers make our reporting possible, so we can help you make sense of the moment. If you’re not a subscriber, please consider becoming one today.

At a Thanksgiving dinner more than a decade ago, a magazine editor named Larry Smith made a suggestion to his relatives seated at the table: They should each tell a story about themselves — in only six words. It was a twist on a challenge that somebody apparently once issued to Ernest Hemingway.

Smith’s family had fun with the idea that night, and he soon turned it into a best-selling book series. More recently, he wrote a Times Op-Ed, “The Pandemic in Six-Word Memoirs.”

For Thanksgiving, I want to invite the readers of this newsletter to do a version of the exercise. In this year of pandemic, politics and so much else, tell us what makes you grateful, in just six words.

“The constraint of the six-word form helps us get to the essence of what matters most,” Smith says, “and I can’t think of a time when expressing gratitude has been more important.”

He advises you to go in any direction you want: “You can express gratitude for life’s big things (‘Cancer-free after five long years’) or seasonal joys (‘Daughter now makes family Thanksgiving feast’). Maybe you’re thankful for current events (‘Vaccines are coming — thank you, science!’) or a longer life journey (‘We all lived through son’s teens’).”

You can leave your six words here, and we’ll print a selection in a newsletter next week.

Time for a hearty one-pot dinner of chicken thighs with apples and greens.

Among this week’s picks: a rendition of “Uncle Vanya” starring Constance Wu and Samira Wiley.

This weird, winding tale of a pig-shaped couch, hand-stitched from velvet and satin.

The late-night hosts talked about a dark liquid streaming down Rudy Giuliani’s face.

The pangram from yesterday’s Spelling Bee was expunging. Today’s puzzle is above — or you can play online if you have a Games subscription.

And you can try this week’s news quiz.

Thanks for spending part of your morning with The Times. See you Monday. — David

P.S. The word “founderitis” appeared for the first time in The Times this week, in a story about the director of the Massachusetts Museum of Contemporary Art, as noted by the Twitter bot @NYT_first_said.

Today’s episode of “The Daily” is about how a medical examiner in Wisconsin experienced the pandemic. On “The Argument,” Representative Pramila Jayapal discusses the Democrats’ divisions.