The debate over who gets what vaccines.

We’re covering the latest puzzle in the vaccine rollouts, the U.S. withdrawal of support to the Saudi-led war in Yemen and what to do about climate anxiety. 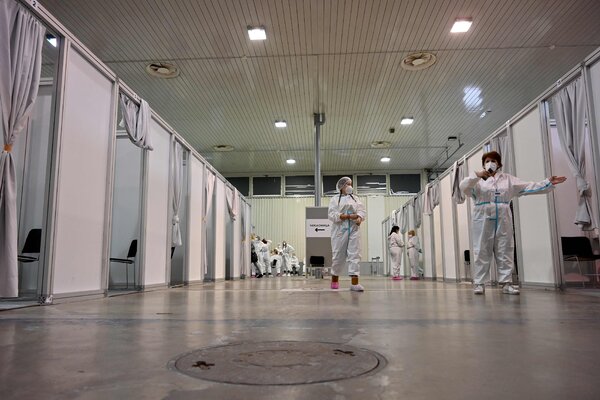 The next vaccine debate: Who gets which shots?

Countries across the world have authorized a growing menu of coronavirus vaccines, but the question now confronting health officials is who should be given which shots.

The issue is most pressing in the European Union, after regulators authorized the AstraZeneca-Oxford vaccine — the third shot now available. Officials in eight countries, including Germany, Italy and France, plan to limit that vaccine to younger people, citing insufficient data on the vaccine’s effectiveness in older people. The doses of the Pfizer and Moderna vaccines would be set aside for older people.

Some scientists say that targeting the vaccine to those in whom it is known to be effective was an urgently needed stopgap, especially as variants gain steam. Others said it would only delay injections for the people most in need of protection.

Context: When the British scientists planned large-scale clinical trials of the AstraZeneca vaccine last year, they chose not to vaccinate older participants until they knew the vaccine was safe in younger ones, a decision that led to fewer older people being inoculated. Britain, India and others authorized it for all adults anyway, but European officials have been more cautious.

A new coronavirus antibody survey in the Indian capital, New Delhi, estimates that more than half of the city’s 20 million residents have had Covid-19.

A team of Chinese scientists reported that a coronavirus vaccine made by Sinovac Biotech, which has rolled out in China and abroad, was shown in early-stage trials to be safe and to have stimulated an immune response in adults over 60.

President Biden was set to announce an end to U.S. support for the Saudi-led military campaign in Yemen, which the United Nations says has become a human rights disaster.

“We’re going to rebuild our alliances. We’re going to re-engage the world,” Mr. Biden said to diplomats before his formal address. He cited as his top priorities battles against the pandemic and climate change and “standing up for democracy and human rights around the world.” Yemen has endured years of relentless airstrikes, starvation and disease, and the coronavirus has deepened the crisis.

Mr. Biden will also freeze the withdrawal of 12,000 American troops from Germany, which President Donald Trump had ordered. After weeks of emphasis on pressing domestic issues, Mr. Biden turned his focus on foreign policy.

Analysis: Mr. Biden has declared that the U.S. will not tolerate the subversion of democracy in Myanmar after the coup and in Russia following the arrest of Aleksei Navalny. But the president is about to discover how years of sanctions fatigue and a decline in American influence may make it difficult to deliver on his promises, writes our national security correspondent David Sanger.

Got climate anxiety? You’re not alone

The prevalence of climate anxiety, or being very worried about the effects of climate change, has grown. But so has the number of people working to alleviate it.

Eco-distress can manifest in many ways, like anguish over what the future will hold or extreme guilt over individual purchases and behaviors, said Dr. Lise Van Susteren, co-founder of the Climate Psychiatry Alliance. Workshops, volunteer opportunities and counseling specific to this anxiety have sprung up around the U.S.

For many Americans, counseling for climate distress is relatively accessible. In some communities, however, especially less wealthy ones, it may seem more like a rare privilege.

Where to begin: Social support networks and climate actions taken in groups can help. “If people aren’t ready or they run from grief, it’ll continue to haunt them,” said Sherrie Bedonie, co-founder of the Native American Counseling and Healing Collective.

If you have 6 minutes, this is worth it

A network of power brokers and warlords, bankrolled by the Afghan government and the national police force, is luring disadvantaged people into joining militias, sometimes under false pretenses. The new recruits are ordered to hold onto key territory around highways in the country’s north.

Our reporters talked to former militia members and local officials about the recruitment — a sign that Afghanistan’s security forces have been hollowed out as Taliban attacks continue.

Britain-China media: Britain’s broadcasting regulator has withdrawn the license for China Global Television Network, an international news channel owned by a Chinese state broadcaster, in part because of its affiliation with China’s Communist Party.

Myanmar: The country’s military government blocked access to Facebook, which is how most people access the internet, amid growing resistance to the coup and calls for civil disobedience.

Brazil mine disaster: The mining giant Vale signed an agreement to pay $7 billion to the Brazilian state of Minas Gerais, two years after the collapse of one of its dams killed 270 people, also causing vast environmental damage. Eleven people are still missing.

Japan apology: Yoshiro Mori, the president of the Tokyo Olympics organizing committee, apologized but said he would not resign for suggesting that women’s speaking time in meetings should be limited “or else we’ll never be able to finish.”

Jeff Zucker: The president of CNN, who reshaped the cable network over the last decade, plans to step down at the end of the year. His decision raises questions about the future of the network.

Snapshot: Above, Dr. Sheetal Khedkar Rao, who decided last year she could not continue practicing medicine. A year into the pandemic, medical workers in the U.S. are feeling not only burned out, but also traumatized by what they’ve endured. “After awhile, the emotional burden and moral injury become too much to bear,” Dr. Rao said.

What we’re listening to: This episode of The Atlantic’s “Experiment” podcast. It delves into a place in Yellowstone National Park where one could potentially get away with murder because of a peculiar glitch in the U.S. Constitution. It’s fun to listen to and smart.

Watch: Viggo Mortensen writes, directs and stars in “Falling,” a drama about a son dealing with his father’s mental decline.

Do: Try these five yoga poses to reap the benefits from a combination of physical and mental exercises.

Get ready to enjoy the weekend. At Home has our full collection of ideas on what to read, cook, watch, and do while staying safe at home.

What happened in Myanmar

Hannah Beech, our Southeast Asia bureau chief, spoke to “The Daily” podcast about the rise and fall of Daw Aung San Suu Kyi in Myanmar. “What this coup proved,” Hannah said, “is that it is Aung San Suu Kyi and her relationship with the military that is the crux of everything that’s happened in the country.”

Where does Daw Aung San Suu Kyi’s relationship with the military start?

Her father was an independence hero, fighting against the British. He was assassinated when she was 2 years old. And in 1962, the military unleashes its first coup. During that time, Aung San Suu Kyi spent most of her years overseas. In 1988 she went back to Myanmar and gave a speech to thousands of people who were protesting military rule. She delivered an amazing speech. And at that moment, I think she really kind of claimed her political birthright.

Why was Aung San Suu Kyi released from her house arrest in 2010?

I think the junta, it had spent years, decades actually, creating a road map for what it called “discipline-flourishing democracy,” which is kind of an oxymoronic political system. Essentially it was a hybrid civilian-military system in which there was this kind of facade of democracy. But at the same time, the military would be able to control major levers of power in the country.

How do you explain her defense and in some cases her abetting of the military’s genocidal campaign against the Rohingya?

There is in Myanmar a feeling that the Rohingya are ultimately foreign interlopers in the country and that in a Buddhist majority nation, there are certain people who don’t belong. And I think that Aung San Suu Kyi, as unpalatable as it might be to say, shares those beliefs.

How do we get to the point where Aung San Suu Kyi is somehow betrayed and removed from power by the military?

I think fundamentally it sprang from her fraying and then really frosty relationship with the guy who is the real ruler in Myanmar, and that’s Senior General Min Aung Hlaing. When she refused to kind of cultivate a relationship with him, she left him kind of out in the cold.

Thank you
Carole Landry helped write this briefing. Theodore Kim and Jahaan Singh provided the break from the news. You can reach the team at [email protected]

P.S.
• We’re listening to “Sway.” Our latest episode features an interview with the billionaire Mark Cuban.
• Here’s our Mini Crossword, and a clue: Jennifer who performed at Biden’s inauguration (five letters). You can find all our puzzles here.
• The New York Times set a record for its subscription business in 2020, the company said in an earnings report on Thursday.