The female heroes of Myanmar’s protests.

We’re covering the women leading the protests in Myanmar, the pope's visit to Iraq and the mysterious fluctuating moonbeam. 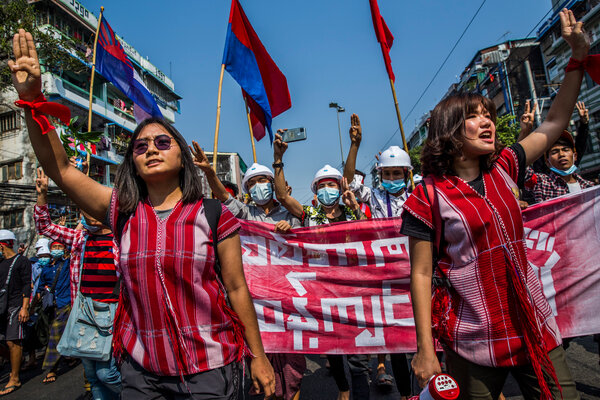 Myanmar’s women on the front lines

The hundreds of thousands of women at the forefront of Myanmar’s protest movement are sending a powerful rebuke to the country’s military junta.

The protesters represent striking unions of teachers, garment workers and medical workers — all sectors dominated by women. The youngest are often on the front lines, where the security forces appear to have singled them out. Three young women were among the at least 38 people killed on Wednesday, the biggest one-day toll since the Feb. 1 coup.

There are no women in the military’s senior ranks, and soldiers have systematically raped women from ethnic minorities, according to Human Rights Watch. More broadly, though, women’s roles in politics, business and manufacturing in Myanmar are growing. In elections in November, about 20 percent of candidates for the National League for Democracy, the party of the ousted civilian leader, Daw Aung San Suu Kyi, were women.

Lives lost: Ma Kyal Sin, 18, was one of the protesters killed on Wednesday. “She is a hero for our country,” said a close friend.

The European authorities will offer a free Pfizer-BioNTech coronavirus vaccine to every adult in the Austrian district of Schwaz, which has been battered by a surge in infections, to determine how effective the inoculation is against the variant first found in South Africa.

The study in Austria is part of a much broader global effort to answer a crucial question as new variants emerge: Do vaccinations designed last year work against more recent mutations? If not, scientists will have to keep developing new versions of the inoculations.

Laboratory studies have shown that some vaccines that work well against earlier variants are less effective — though they still offer significant protection — against the variant known as B.1.351. It was found in South Africa in December and has become the dominant one there.

The European Union’s drug regulator announced that it was beginning a rolling review of the Russian-developed Sputnik V vaccine, after Hungary authorized it for use and the Czech Republic said it would do the same.

Italy yesterday blocked a shipment of the Oxford-AstraZeneca vaccine from being flown to Australia, making good on the E.U.’s threats to clamp down on exports of the shots and ratcheting up a global tug of war over vaccines.

The pope travels to Iraq on a mission to heal

Pope Francis will begin a three-day visit to Iraq today despite worries that the trip could become a superspreader event in a country where the coronavirus still rages.

The Vatican insists the trip will be safe, and the pope is planning a large Mass in a soccer stadium in the Kurdish town of Erbil. He will also very likely draw crowds to watch him pray in Qaraqosh, a town of Syriac Catholics, in the northern Nineveh Plains. Francis, 84, was vaccinated against Covid-19 in mid-January.

Such a visit has been the goal of many popes before him, who had to cancel plans because of security concerns in a nation ravaged by war. Francis accepted an invitation extended in July 2019.

Explainer: The Vatican believes the risks are outweighed by the chance to support one of the world’s oldest Christian communities. The ranks of Iraq’s Christians have dwindled to roughly a third of the 1.5 million who lived there during the final years of Saddam Hussein’s rule.

If you have 8 minutes, this is worth it

Royal skirmishes ahead of a high-profile interview

In the days before Prince Harry and his wife, Meghan, above, present their side of a sensational royal rupture to Oprah Winfrey, the British royal family and the self-exiled couple are maneuvering furiously before the interview is broadcast on television to try to shape the narrative.

Was Meghan the victim of a cold, unwelcoming family that cruelly isolated her after she married Harry? Or was she a Hollywood diva who mistreated her staff and triggered a breach between the family and one of its most beloved young princes?

Algeria-France relations: President Emmanuel Macron of France has taken a further step toward reconciliation by declaring that Ali Boumendjel, a leading Algerian lawyer and nationalist, did not die by suicide in 1957, as France had long claimed, but was tortured and killed by French soldiers.

Iceland: More than 18,000 earthquakes have shaken Iceland in just over a week, leading scientists to believe that a volcanic eruption could be imminent.

Tsunami warning: Thousands of people were evacuated in New Zealand on Friday after an 8.1-magnitude earthquake struck in the South Pacific, prompting officials to issue tsunami warnings for coastal areas.

Hong Kong: A senior Communist Party official announced that China’s national legislature planned to rewrite election rules in Hong Kong to ensure that the territory was run by patriots — people loyal to Beijing and the Communist Party. The congress will discuss a draft plan when it gathers for a weeklong session starting today.

Snapshot: Above, the mysterious fluctuating moonbeam. When meteorites bombard the moon’s surface, sodium atoms fly high into orbit and collide with the sun’s photons, giving the moon something like a comet trail invisible to the human eye. A new report suggests that the bigger the meteor that hits the moon, the brighter the trail.

Gender gap: Under a proposed E.U. law, companies in Europe could be sanctioned if they fail to pay men and women the same salaries for doing the same work. Separately, a new report suggests mothers in the U.S. are going back to work — and still doing most of the parenting.

Drag kings: Once an underappreciated part of the drag world, drag kings have found more exposure during the pandemic, with pageants moving online, and amid the popularization of drag for wider audiences.

What we’re reading: This deep-dive New Yorker article on the U.S. military’s withdrawal from Afghanistan. It’s a chilling report on the near-future of the war-torn country.

Cook: In this wintry recipe, cauliflower gets the eggplant Parmesan treatment — baked with marinara sauce, mozzarella and grated Parmesan cheese until bubbling and browned.

Watch: The thoughtful documentary “Stray” uses the stray dogs of Istanbul to comment on the human condition.

Boogie: Looking to learn some dance routines at home? Here are five tutorials for varying styles — each is a good workout.

Start your weekend with aplomb. At Home has our full collection of ideas on what to read, cook, watch and do while staying safe at home.

Melissa Kirsch spends her days thinking up activities for us to do at home in The Times’s At Home newsletter. She shared some of her own strategies for living well during an uncertain time.

Think about how I want to look back on this time. I find myself consciously trying to do things that will make me feel better about this experience in the future. That may mean reading more or cooking more or trying to be creative about the ways that I connect with other people — like writing letters or meeting people for walks in the cold. I don’t want this year to turn into a blur of Zoom chats and Netflix.

Make exercise part of my “social” life. When my daily life is busy and chaotic, I often treat exercise as a solo activity. But I’ve started jogging without headphones, purposely trying to take advantage of the moments when I’m outside the house and around other people, even if I’m not deliberately interacting with them.

Create a tiny routine. These can be small, pleasurable things. It can be deciding that you’re going to just have coffee on your stoop every morning or to walk your dog at 1 p.m. I make my bed each morning and do the crossword puzzle during lunch. These are pretty rudimentary elements of a day, but they’re two poles between which to hang the hours of the morning.

Have a great weekend. I’ll see you on Monday.

P.S.
• We’re listening to “The Daily.” Our latest episode is about how close the end of the pandemic might be.
• Here’s our Mini Crossword, and a clue: Fitting name for a hirsute guy (five letters). You can find all our puzzles here.
• Our travel writer Tariro Mzezewa joined the “Travel With Hawkeye” podcast to discuss plans for a vaccine passport.