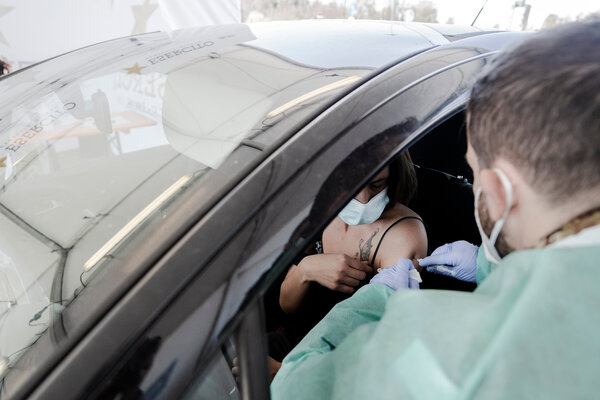 The European Medicines Agency said on Thursday that the AstraZeneca vaccine was safe and effective, a finding that could prompt more than a dozen countries, including Germany, France and Italy, to resume use after temporary suspensions.

Those countries had paused inoculations with the AstraZeneca shot over concerns about possible rare side effects involving blood clots. The agency said a new warning label would be added so that doctors could be on the lookout for a potential rare complication leading to bleeding in the brain.

Despite reports of a handful of troubling incidents involving the AstraZeneca vaccine, a review of millions of cases found that it did not increase the overall risk of clots, though “there are still some uncertainties,” said Dr. Sabine Straus, who heads the agency’s risk assessment committee.

Most of the countries signaled that they were likely to resume using the vaccine once the agency issued clearance. But the brief delay could be costly for European countries that are dealing with third waves and a slow vaccine rollout.

Quotable: “A situation like the one we have seen here is not unexpected,” the E.M.A.’s executive director said. “When you vaccinate millions of people, it’s inevitable that rare or serious instances of illnesses will occur in the time immediately following vaccination.”

Accounts of atrocities in the Ethiopian region of Tigray

Four months after Ethiopia’s prime minister, Abiy Ahmed, began a sweeping military operation, the restive region of Tigray is being wracked by a bitter civil conflict. Accounts of egregious rights violations — massacres, sexual violence, ethnic cleansing and fears that starvation is being used as a war tactic — have set off alarms across the world.

In Mekelle, the region’s biggest city, hospitals are filled with casualties from the fighting that rages in the countryside, many of them terrified civilians arriving with grievous wounds. Schools house some of the 71,000 people who have fled to the city, often bringing accounts of horrific abuses at the hands of pro-government forces.

Restaurants and bars no longer play certain songs in the local Tigrinya language, fearing retribution. A TV station that once broadcast local news now offers the government’s perspective. The internet has been shut down since November.

Casualties: “I’m lucky to be alive,” Alefesha Hadusha, her head swaddled in bandages, said from her hospital ward. Her parents and two brothers were killed in an attack, she said. An X-ray by her bed showed a bullet lodged in her head.

A ‘crisis point’ for Asian-Americans

President Biden and Vice President Kamala Harris plan a visit today to Atlanta, where communities are reeling after a gunman shot and killed eight people at three massage businesses in the area. Six of the victims were women of Asian descent.

The nation has reached a “crisis point” in discrimination and violence targeting the Asian-American community, lawmakers warned during the first hearing in Congress dedicated to the issue in three decades.

In deeply personal testimony, the lawmakers described community trauma and argued that the uptick in attacks on Asian-Americans was a direct result of the rise in anti-China rhetoric. The hearing was scheduled weeks ago, but it resonated in a frightening moment.

Vigils: From New York to Washington, crowds gathered this week to pay tribute to the victims. Here’s what we’ve learned so far about the people who were killed.

Europe’s level of vaccination against Covid-19 is too low to slow transmission of the coronavirus, the World Health Organization said. The continent recorded more than 1.2 million new infections last week, and more than 20,000 people a week are dying of the virus.

The U.S. will send millions of doses of the AstraZeneca vaccine to Mexico and Canada. The move comes as the Biden administration is quietly pressing Mexico to curb the stream of migrants coming to the border.

Secretary of State Antony Blinken and Jake Sullivan, Mr. Biden’s national security adviser, met with their Chinese counterparts in Alaska. The meeting represents a new approach to China, in which the Biden administration will focus on gathering allies to counter Beijing’s coercive diplomacy.

Russia recalled its ambassador to Washington after Mr. Biden, in an ABC interview, acknowledged that he thought President Vladimir Putin was a “killer.”

The House voted yesterday to create a path to citizenship for an estimated four million undocumented immigrants, reopening a politically charged debate over the nation’s broken immigration system.

Above, a train set from Märklin, a 162-year-old model train maker in Germany. The company has experienced a boom in sales during the pandemic and is hiring new apprentices for the first time in years as hobbyists embrace tiny steam trains.

A private investigator says the British tabloid The Sun paid him $2,055 in 2016 for information about Prince Harry and Meghan Markle that had been taken from a restricted database. It is a violation of U.S. privacy statutes for investigators to pass such reports on to news organizations.

If you walk and text, you slow everyone down. An experiment by Japanese researchers showed how just a few distracted walkers really can throw off the movements of a whole crowd.

An announcement from the mayor of Lyon, the French gastronomic capital, that elementary school lunches for 29,000 local children would no longer include meat has split the nation. (Fish and eggs remain on the menu.)

Though the mayor, a member of the Green party, cast his decision as a way to speed up lunches in socially distanced times by offering a single menu, those on the right have accused him of having an ideological agenda underpinned by elitism and moralism.

Most pop songs since the 1960s — 84 percent by the end of the 1980s — have followed roughly the same structure. The opening verse sets the scene, and then the pre-chorus builds to a climax with the chorus. Repeat for decades.

Now that’s being upended, as Nate Sloan and Charlie Harding, co-hosts of the music podcast “Switched On Pop,” write in The Times. Many hits since the 2010s have eschewed the catchy, rigid structure for something wilder and less predictable. Their article visualizes these changes, charting the structure of pop hits from Billie Holiday to Billie Eilish.

Unpredictability is a matter of survival in the competitive landscape of social media platforms and music streaming services like Spotify. Many artists get to the hook of a song faster so the listener will hit the 30 seconds generally required for the streaming payment to register and then deliver a variety of catchy sections — rather than one repeating chorus — to keep people listening.

Streaming has also incentivized writers to make pop songs shorter, in part because people can easily skip around.

Make saag paneer, an Indian dish with spinach (or other dark greens) and spices.

The movie “Quo Vadis, Aida?” dramatizes the Srebrenica massacre during the Bosnian war, in which 8,000 men were murdered. The film has been nominated for an Oscar.

Online writing groups have thrived during the pandemic, with membership fueled by more time at home and fewer, or no, social obligations.

Take a look at life in Canada’s Northwest Territories, an area that is as remote as it is pristine, and which is home to Indigenous peoples of many cultures and languages.

P.S. A Bloomberg article looked at The Times’s investment in mobile games.

The latest episode of “The Daily” is on the killings in Atlanta and hate crimes against Asian-Americans.

Sanam Yar contributed reporting. You can reach Natasha and the team at [email protected].