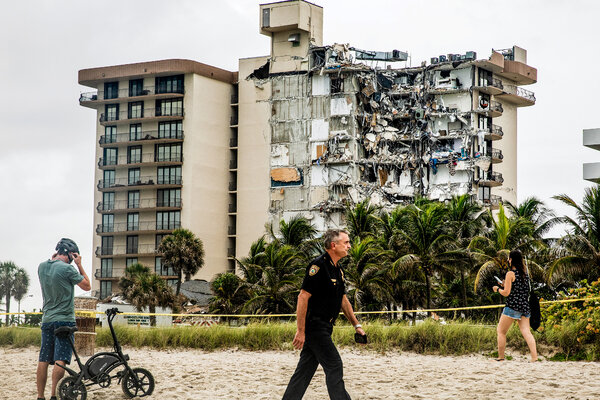 The sudden collapse of a condominium complex north of Miami Beach has left at least one person dead and 99 unaccounted for. Search-and-rescue teams using trained dogs and sonar looked above and below ground for signs of life amid the piles of rubble.

Half of the Champlain Towers complex collapsed to the ground yesterday, just after midnight, as if struck by an earthquake. The building was home to a mix of retirees and well-off professionals with young families. Fifty-five units were affected by the collapse, the mayor said.

Public records show the building was constructed in 1981 and was coming up on its required 40-year recertification. Some of its more than 136 units had recently sold for over $1 million.

Disaster zone: The wrecked interiors of what were once people’s homes gaped open toward the ocean: Broken air-conditioning units. An empty bunk bed. Linens waving in the wind. At one point, clouds of dust swirled as a fire broke out at the site.

With just 2.7 percent of the world’s population, Brazil has suffered 13 percent of its Covid-19 fatalities, and the pandemic is not abating there.

President Jair Bolsonaro’s chaotic response to the crisis has left the country poorer, more unequal and increasingly polarized. Social distancing measures have been spotty and badly enforced, the president and his allies have promoted ineffective treatments, and for months the government failed to acquire a large number of vaccine doses.

That scarcity of vaccines left governors, mayors and private-sector leaders scrambling to strike deals with suppliers. During recent congressional hearings, a Pfizer executive said officials had ignored the company’s repeated offers to sell its Covid vaccine to Brazil. The U.S. now plans to send three million doses of the Johnson & Johnson vaccine to Brazil.

By the numbers: About one in every 400 Brazilians has died from the virus, according to the official count, but many experts believe the true death toll may be higher. Around 30 percent of the population has had at least one dose of a vaccine.

The International Monetary Fund is working on a plan to issue $650 billion worth of reserve funds that countries could use to buy vaccines, finance health care and pay down debt.

Despite its high vaccination rate, Israel is grappling with more than 700 new cases after an outbreak at schools in the cities of Modiin and Binyamina. Although 12- to 15-year-olds are eligible for vaccination, many have yet to get shots.

Chancellor Angela Merkel of Germany has called for E.U. member states to come up with a position on arrivals from countries where the Delta variant is dominant, including Britain.

The remains of as many as 751 people, mainly Indigenous children, were discovered at the site of a former school for Indigenous youth in the province of Saskatchewan, a Canadian Indigenous group said. It was the largest such discovery to date.

Just weeks ago, the remains of 215 children were found in unmarked graves on the grounds of another former boarding school in British Columbia. For decades, Indigenous Canadians suggested through their oral histories that thousands of children had disappeared from these schools, but they were often met with skepticism.

“This was a crime against humanity, an assault on a First Nation people,” Chief Bobby Cameron of the Federation of Sovereign Indigenous Nations said yesterday. “The only crime we ever committed as children was being born Indigenous.”

Context: A federal commission in 2015 found that the residential school system, which forced Indigenous children to assimilate into Western culture, was a form of “cultural genocide,” in which students were abused by members of the clergy and confronted with disease, death and danger.

Related: The U.S. this week announced that it would search federal boarding schools for possible burial sites of Native American children.

A rapidly expanding, illegal Israeli settlement in the West Bank and the huge protests it has begun to attract have become an early stress test for the fragile new Israeli government. Above, the settler outpost, Evyatar, and the Palestinian village of Beita in the valley below.

The Biden administration is preparing to relocate thousands of Afghan interpreters, drivers and others who worked with American forces to other countries in an effort to keep them safe while they apply for entry to the U.S.

A British warship that deliberately sailed close to Crimea, in a show of support for Ukraine, incited an international incident as Russia scrambled warplanes and Coast Guard vessels.

News From the U.S.

President Biden and a bipartisan group of centrist senators reached a deal yesterday for $1.2 trillion in investments to rebuild the nation’s infrastructure.

Britney Spears said she had not known she needed to petition a court to be released from her conservatorship, sparking questions for the court-appointed lawyer who has represented the singer for 13 years.

The discovery of baby dinosaur fossils in northern Alaska suggests that a number of species survived year-round above the Arctic Circle, enduring freezing temperatures. It’s likely some had downy feathers to keep themselves warm.

As New York City fully reopens, tourism officials are making an urgent plea for visitors to start rushing back.

Though the Israeli military said that these strikes were carefully targeted, a Times investigation found that Israel dropped some of the heaviest bombs in its arsenal without warning on a densely packed neighborhood, and with limited intelligence about what it was attacking.

Creating a meeting that isn’t bad

People have been holding meetings for thousands of years. Ancient Egyptians had hieroglyphs to convey the concept of “council,” while George Washington, sick of writing letters, convened fellow founders in his study to help devise the U.S. government. But just because we’re used to meetings doesn’t mean we’re any good at them, writes our reporter Caity Weaver.

Over the course of the pandemic, meetings have taken on new forms as in-person congregations were canceled and we moved online. Those meetings were almost never without technical difficulties, and many people found them wanting.

To avoid a bad meeting, it should have a reason to exist, a mixture of introverts and extroverts, and, ideally, designated decision makers. As Caity writes, “A meeting can be good, in short — but only if it needs to be a meeting.”

A meeting can be useful or even good if it meets these three criteria: “You know what you’re going to do in it,” explains Caitlin Rosenthal, a historian at the University of California, Berkeley. “You do the thing. And at the end, somebody reports out: ‘OK, we’re all going to do these things going forward.’”

If you have to have a meeting, do it like that. With as few people as possible.

For more: The Upshot’s Claire Cain Miller asks, Do chance encounters at the office boost innovation?

This Dutch baby with bacon and Camembert might just be the brunch inspiration you were looking for. Here’s a sweet alternative.

Stevie Wonder, Nina Simone, B.B. King and others shine in “Summer of Soul,” a new documentary about the 1969 Harlem Cultural Festival from Questlove.

Lonely country cabins, melancholic mansions and other abandoned houses are filling the Instagram feeds of amateur and professional photographers.

That’s it for today’s briefing. Have an excellent weekend. — Natasha

The latest episode of “The Daily” is about the struggles of India’s vaccine giant, the Serum Institute.

Claire Moses contributed to today’s Arts and Ideas. You can reach Natasha and the team at [email protected].