We’re covering a second day of Afghan protests against the Taliban and the W.H.O.’s criticism of vaccine boosters. 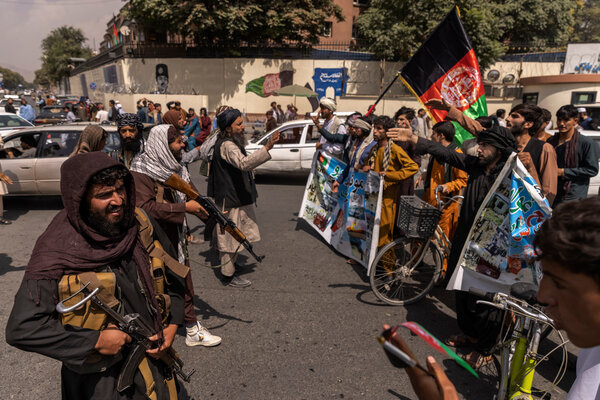 Protesters opposed to the Taliban’s takeover in Afghanistan took to the streets for the second day on Thursday, this time marching in Kabul, including near the presidential palace. At one demonstration in the city, about 200 people had gathered before the Taliban broke it up violently. Here are the latest updates.

The Taliban announced a curfew in the southeastern city of Khost, also on Thursday, after protests there. In Asadabad, in the east, several people were killed when Taliban fighters opened fire on protesters waving the national flag at a rally on Afghanistan’s Independence Day, according to a witness cited by Reuters.

Despite the group’s public assurances that they would not seek revenge, Taliban members are intensifying a search for people they believe worked with U.S. and NATO forces, including among the crowds outside Kabul’s airport, according to a confidential U.N. report seen by The Times.

As thousands of Americans and Afghans have surged toward the airport, seeking flights out of the country, President Biden has suggested that U.S. troops may stay longer in order to finish evacuating all Americans.

What’s next: The reality of governing a changed nation is proving difficult for the Taliban. Many critical workers are hiding in their homes, and services like electricity, sanitation and clean water could soon be affected, aid agencies say.

Power shift: After the U.S. withdrawal of troops from Afghanistan and the collapse of the Kabul government, Russia is taking charge in Central Asia to shield the region from a possible spillover of violence. Along with Pakistan and China, Russia is gaining influence in security matters.

The Africa director at the World Health Organization, Dr. Matshidiso Moeti, criticized some wealthy nations over plans to allow third Covid shots while the African continent is still struggling to get vaccine supplies.

African countries continue to lag far behind in inoculations, with only 2 percent of the continent’s 1.3 billion people fully vaccinated. Though vaccine shipments have accelerated in recent weeks, there are still not nearly enough to meet needs, Dr. Moeti said.

The W.H.O. had called for a moratorium on booster shots until the end of September to free up supplies for low-income nations. But many countries are ignoring that appeal: The U.S. aims to start booster shots on Sept. 20; France and Germany have similar plans; and over a million people in Israel have already had them.

“As some richer countries hoard vaccines, they make a mockery of vaccine equity,” Moeti said.

Research suggests that the plastic barriers used in stores and nail salons to prevent the spread of the virus may make things worse.

Several county school boards in Florida are requiring masks in schools despite the state’s threats to penalize them.

A bomb threat on Capitol Hill

A man who claimed to have a bomb in a pickup truck outside the Library of Congress in Washington surrendered to the police on Thursday, after hours of negotiations and evacuations of several government buildings in the area.

The man had driven his vehicle onto the sidewalk of the Library of Congress on Thursday morning. When the police arrived, the man said he had a bomb, and one of the officers observed what appeared to be a detonator in his hand. It was unclear if the man actually had explosives.

Officials identified him as Floyd Ray Roseberry, about 50 years old, and said he was making anti-government statements.

After months of silence about its future, Huarong Asset Management, the Chinese corporate giant, said that it would receive financial assistance from state-backed companies.

A powerful roadside bomb exploded during a procession of Shiite Muslims in central Pakistan on Thursday. The local police said that the blast killed at least three people and wounded over 50, according to The Associated Press.

Hurricane Grace weakened to a tropical storm after making landfall as a hurricane on Thursday morning south of Tulum, Mexico. Tropical Storm Henri is approaching the northeastern United States.

U.S. regulators are once again taking aim at Facebook by beefing up claims in an antitrust suit.

A British High Court rejected an attempt to halt a warrant to kill Geronimo, an 8-year-old alpaca that the authorities believe has bovine tuberculosis. His owner denies it.

A program called “Uffizi Diffusi,” or “Scattered Uffizi,” is lending artworks kept in storage by the Uffizi Gallery in Florence to towns throughout the Tuscany region. In the hamlet of Castagno D’Andrea, the Uffizi lent a recently restored Andrea del Castagno fresco that is turning out to be quite the tourist draw.

An Afghan author reflects on his birthplace

Khaled Hosseini’s novels have offered a view of Afghan life that wasn’t limited to war and destruction. He talked to The Times about the pain and frustration of watching events unfold in his country from afar.

How has your sense of Afghanistan’s future changed over the year?

I was in Afghanistan early in 2003, and in those days, there was virtually no insurgency. There was this very heady optimism about where the country was headed — gender equality, rights for girls and women, people being able to participate in an open and representative political process.

Over the years we adjusted our expectations, and over time we came to expect that, well, that was all a pipe dream, but at least what we can hope for is a compromised sort of democracy, with corruption and all sorts of issues. There’s been a lot of progress in the last 20 years in Afghanistan, and that gave me hope. And of course, over the last couple of years, those hopes have declined. And in the last few days, they have been utterly crushed.

What should people be reading to better understand Afghanistan and Afghan people right now?

But there has been an uptick in demand for your books. Is there anything you want people to know who are picking up one of them for the first time?

These are stories. This is the perspective of someone who has lived in exile, essentially since 1980. I’ve always been very careful about making sure that people don’t mistake me for some kind of Afghan ambassador or Afghan representative. I haven’t lived there in a long time.

But I do have a perspective, and I have a deep affection and a deep emotional connection with the people there, with the land, with the culture, with the history and the heritage. I hope my books provide a little bit of insight on what Afghanistan is, beyond the usual story lines.

Pair watermelon, which works beautifully in salads, with avocado and radish.

The mean girls from HBO’s “The White Lotus” explain themselves.

The French novelist Laurent Binet’s latest book, “Civilizations,” imagines what might have been if the Incas had invaded Europe in the 16th century.

P.S. Our assistant managing editor for International announced that all Times Afghan journalists and their families had safely left Afghanistan.

The latest episode of “The Daily” is about Afghan interpreters whom the U.S. left behind.

You can reach Melina and the team at [email protected].