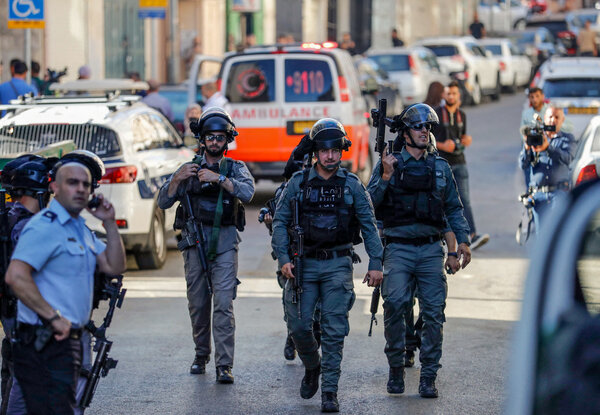 Israel’s internal security director issued a rare public warning on Saturday night about what he called rising levels of incitement, days before a vote on the political coalition designed to oust Prime Minister Benjamin Netanyahu.

Far-right Jewish activists have announced plans for a provocative march this week through Palestinian neighborhoods in Jerusalem. On Sunday, the Israeli police detained Palestinian twins whose activism helped bring attention to the displacement of Palestinians from East Jerusalem, which precipitated the recent conflict in Gaza.

The heterogenous coalition, which includes parties from across the political spectrum, could usher in a more liberal civil rights agenda and would include, for the first time in Israeli history, an independent Arab party. But Netanyahu and his supporters have put ultranationalist members under pressure, accusing them of betraying the country by serving with leftists and Arabs.

Divisions: Ultra-Orthodox Jews, who make up 13 percent of the population, stand to lose power. Under Netanyahu, the two main Haredi parties had outsize influence in governing coalitions, which they used to secure generous state funding, fight pandemic restrictions, push a conservative social agenda and exempt members from compulsory military service.

Diverging approaches to the Delta variant

Britain and other parts of Europe are maintaining limits on gatherings and weighing lockdowns despite plunging infection levels and a surging vaccination program.

The spread of the highly contagious Delta variant, first identified in India, has led some parts of Britain to extend lockdown restrictions. The government removed Portugal from its list of quarantine-free travel destinations and might delay its scheduled June 21 reopening by a few weeks.

But in the U.S., where many states began scaling back restrictions soon after they made all adults eligible for vaccines, the economy has reopened. Over the Memorial Day weekend, 135,000 people attended the Indianapolis 500, while restaurants across the country were thronged with customers as mask mandates were discarded.

Deadline: “There are reasons to be hopeful — we’re not seeing a big trend in hospital admissions — but it’s early days,” said James Naismith, the director of a British medical research center. “If we don’t see anything by June 14, we can exhale. We don’t need to hold our breath.”

New Delhi will ease some restrictions on Monday, even as the Indian capital prepares for a possible third wave.

Many of the world’s poorest nations are living through their deadliest Covid outbreaks as global vaccination plans stall.

A free apartment for a vaccine? In Hong Kong, incentives are multiplying.

Weddings are back, and Italy’s candy makers are delighted. Traditional sugarcoated almond confections known as confetti are the favorite of brides — and the Vatican.

President Biden will join European leaders at the Group of 7 summit this week in Britain before heading to visit NATO on June 14. After the previous administration, the simple fact that Biden regards Europe as an ally and NATO as a vital element of Western security is almost a revelation.

Under Donald Trump, who cheered Brexit and eviscerated NATO, declaring the alliance “obsolete,” Europe’s relationship with the U.S. was put under strain, as 75 years of American foreign policy vanished overnight with a change in the presidency. Those scars will take time to heal.

Leaders have tense issues to discuss, such as the Afghanistan pullout; military spending; Russia and China; trade disputes and tariff issues; the climate; and vaccine diplomacy.

Developments: The summit comes after finance ministers agreed to back a new global minimum tax rate that is aimed at stopping large multinational companies from seeking out tax havens.

Amsterdam is slowly crumbling, as the wood pilings that keep the Dutch city upright struggle under the weight of modern building materials like concrete. For the next two decades, the city will look like one gigantic construction site.

Roger Federer pulled out of the French Open on Sunday after a brutal third-round match, citing concerns about a knee injury.

Prince Harry and his wife, Meghan, on Sunday announced the birth of their second child, Lilibet Diana, who will be known as Lili. Her name pays tribute to Harry’s grandmother and late mother.

Voters in the German state of Saxony-Anhalt appeared to support a return of the ruling conservatives. Many looked to Sunday’s vote for indications about the national election on Sept. 26 for a new Parliament.

Senator Joe Manchin said yesterday that he would not vote for the Democrats’ far-reaching bill to combat voter suppression, or to end the filibuster.

Vice President Kamala Harris will be confronted by a stark fact on her first international trip to Central America: Expanding aid programs has not stemmed migration.

It looks like a gentle scene of a seaside vacation. But this painting by Berthe Morisot, perhaps the most underrated Impressionist, is a layered vision of a dawning modern age and a rare glimpse at the 19th-century female gaze. Take a closer look.

An overlooked part of Dutch history

The Netherlands rarely grapples with its role in the global trade of enslaved people, even as it celebrates its commercial history. A major museum in Amsterdam aims to change that, with the opening of “Slavery,” an exhibition about Dutch colonial history.

Though slavery was forbidden in the Netherlands, it was legal in Dutch colonies, where — mostly through huge trading companies — the Dutch enslaved more than a million people.

In Dutch colonies such as Brazil, Indonesia and Suriname, enslaved people produced goods like sugar, coffee, gold, pepper, tobacco, cotton, nutmeg and silver. They also worked in households, in shipping and in farming, and served in the Dutch military.

The exhibition at the Rijksmuseum, which opened on Saturday, presents this history through 10 true stories about merchants, abolitionists, enslaved people, those who bought them and others. It includes objects from the era, like Rembrandt portraits of owners and an ornate tortoise shell box depicting nearly naked plantation workers.

This elegant white cake with coconut cream and apricot dates from the 1970s but is perfect for today.

Go behind the scenes of the Netflix fantasy series “Sweet Tooth,” which eschews C.G.I. in favor of inventive practical effects.

P.S. The word “phuyai” — Thailand’s gilded elite — appeared for the first time in The Times yesterday.

There’s no new episode of “The Daily.” Instead, listen to Episode 2 of “Day X,” about far-right extremism in Germany.

Claire Moses contributed to today’s Arts and Ideas. You can reach Natasha and the team at [email protected].