Good morning. We’re covering the fall of Benjamin Netanyahu, the end of the G7 summit and an outbreak in Guangzhou, China. 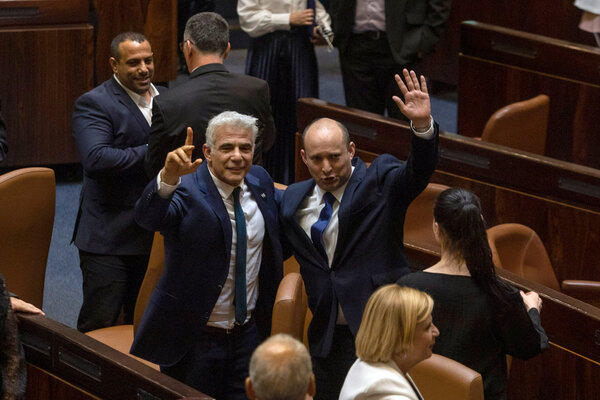 The Israeli parliament formally ousted Benjamin Netanyahu, whose 12-year reign as prime minister was the longest in the country’s history. The Knesset approved a new coalition government by a single vote: 60 to 59, with one abstention.

Naftali Bennett, often described as further to the right than Netanyahu, is the new prime minister. He sees no path to Palestinian statehood, and he believes Israel should annex much of the occupied West Bank.

In two years, if the government can hold, the centrist leader Yair Lapid will take his place. A savvy political operator, he coaxed the deal into place and favors many progressive policies.

The eight parties in the coalition have little in common. They plan to steer clear of issues that would divide them, like the conflict with Palestinians, and promise a domestic focus: patching budgets, fixing roads and rebuilding the fumbling economy.

Netanyahu: The 71-year-old has no plans to retire and may still lead the powerful Likud party. In a self-congratulatory speech on Sunday, he listed his accomplishments and swore vengeance, pledging to lead his supporters “in a daily battle against this bad and dangerous left-wing government, and bring it down.”

The Group of 7 summit ended on Sunday with a joint communiqué from the world’s wealthiest large democracies, who presented a mutual front against China and Russia.

On China: The communiqué addressed nonmarket practices and human rights abuses. President Biden said his proposal to finance infrastructure in the developing world would provide a “democratic alternative” to China’s lending and investment push.

On Climate Change: The group did not reach agreement on a timeline to stop burning coal. The G7 nations together produce about a quarter of the world’s pollution.

Diplomacy: Leaders openly welcomed Biden and the return to international diplomacy after Donald Trump’s disregard for alliances. On Sunday, after the summit, the Bidens headed to Windsor Castle for tea with the Queen.

And more diplomacy: On Monday, Biden will meet with President Recep Tayyip Erdogan of Turkey, who is softening his autocratic stance. On Wednesday, Biden will speak to the Russian president, Vladimir Putin, and then address the press alone. Although Biden said relations with Moscow were at a “low point,” he is open to collaborating on humanitarian assistance for Syrians and Putin’s proposal to mutually extradite cybercriminals.

As the Delta variant of the coronavirus spreads in southeastern China, doctors there say the infected are getting sicker and worsening faster.

Within three to four days of the onset of symptoms, up to 12 percent of patients become severely or critically ill, said a leading critical care physician in Guangzhou, the city where the outbreak has been centered. In the past, the proportion had usually been 2 percent or 3 percent, he said.

Southeastern China has remarkable testing capabilities: Officials say they have conducted 32 million tests in Guangzhou, which has 18 million people, and 10 million in the adjacent city of Foshan, which has seven million. Tens of thousands of residents are isolated or quarantined, which appears to have slowed the outbreak.

Context: Delta was first identified in India, where it was blamed for widespread suffering. It’s since become the dominant variant in Britain, where doctors suggest it is more contagious and may infect some people who have received only one of two vaccine doses.

Only 60,000 residents of Saudi Arabia will be allowed to attend the annual hajj pilgrimage to Mecca next month.

Vaccine avoidance stemming from fears about the Sputnik shot is exacerbating a new surge in Russia.

Several McDonald’s outlets in Indonesia had to close after a special “BTS Meal” drew crowds of delivery drivers to pick up the orders, violating pandemic restrictions.

A gas explosion at a produce market in central China, above, killed at least 12 people and injured 138 others on Sunday.

Hong Kong’s film industry is in peril as China’s censorship codes stretch to the screen.

China is still buying American DNA equipment for the police in Xinjiang, despite U.S. efforts to prevent it from being used to enable surveillance and human rights abuses.

Debates over migrant policies gripped Australia after a 3-year-old detainee ended up in the hospital.

Many physicians in Myanmar have refused to work at state-run hospitals to protest the coup. Dying patients support the decision.

Pitchers have been doctoring baseballs with sticky substances for years, but the concoctions are getting better — and the games more boring.

Christian Eriksen, a Danish soccer star, is in stable condition after he went into cardiac arrest during a Saturday game.

The Westminster Kennel Club Dog Show was outside this year. The contestants loved it.

“These things happen,” the Mexican president said when a train fell 40 feet to the traffic below in May, killing 26 people. But a Times investigation found serious flaws in the basic construction of the metro that appear to have led directly to its collapse.

Prosecutors secretly subpoenaed Apple in 2018 for data on Donald McGahn II, who was then Donald Trump’s top White House lawyer.

Peru’s undecided presidential election is pushing democracy to its limit.

A lobster diver in Massachusetts survived a ride inside the mouth of a humpback whale.

It’s not quite a flying car, but it’s certainly not a helicopter, either. Silicon Valley entrepreneurs are trying to ease traffic by making a quick flight as easy as calling an Uber.

Baby names often wax and wane with the decades. Right now, parents are engaged in an arms race for idiosyncratic or ancient names.