Art and defiance in Myanmar. 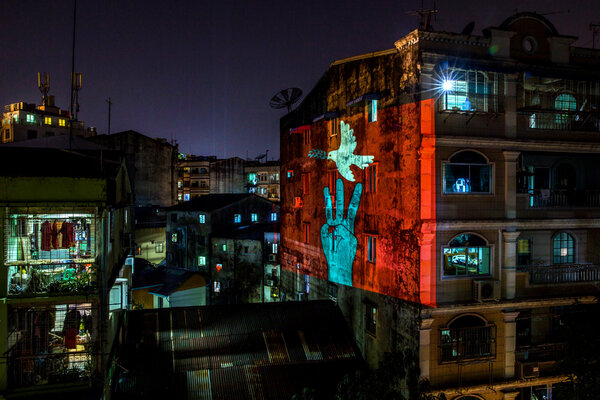 Art and defiance in Myanmar

Hundreds of thousands of people gathered in central Yangon on Wednesday, the biggest rally since the start of protests against a coup, holding up posters and signs designed for the Instagram generation.

As with protests in Thailand and Hong Kong, art, memes and creative dissent have become a tool for demonstrators in Myanmar. Artists are providing the uprising with graffiti, hip-hop, poems, anthems, cartoons and paintings that share their messages. Art collectives are producing free designs so that protesters can print them for signs.

Along with the demonstrations, more than 750,000 people have stopped going to work. That the movement is undeterred, and even gaining steam, is notable: The military has arrested more than 450 people since the coup on Feb. 1, even firing shots into the crowds. It also has long seen menace in the arts.

Artists as targets: Among the dozens of people captured alongside Daw Aung San Suu Kyi, Myanmar’s civilian leader, in the coup were a filmmaker, two writers and a Reggae singer. A graffiti artist whose protest tags have enlivened Yangon said he was on the run from the police.

Why are the protesters so determined? “Many people in Myanmar know intimately the cost of their defiance,” Hannah Beech, our Southeast Asia bureau chief, told me. Having experienced military rule for most of the past six decades, “they have seen monks killed on the streets, students shot, grannies jailed,” she said. “So they know what they are fighting for, which is basic civil liberties and dignity.”

The civilian-military leadership that was ousted was flawed, and minorities faced persecution. But still, Hannah said, it was a better life for many: “They could go on the internet. They could read a newspaper with real news. They could maybe work for a foreign company.” And now that these gains are under threat, “people are marching by the millions to reclaim freedoms whose value they know better than most of us on earth.”

With the Olympics ahead, Japan starts vaccinating

Japan began its coronavirus vaccination campaign on Wednesday, starting with medical workers and planning to reach the general population by the summer. It’s a late start compared with other countries.

The slow rollout was in part because the authorities requested that Pfizer run separate vaccine trials in Japan. There was also less urgency as Japan has managed to keep infection levels relatively low and, so far, has recorded around 7,200 deaths, despite worries about the spread of more contagious variants.

Ready for the Olympics? Organizers of the Games have been under scrutiny, as no tournament this large has been possible during the pandemic. Even the much smaller Australian Open had to call off spectators after a small outbreak. In Shimane Prefecture, which has recorded 280 cases, the governor threatened to cancel activities around the torch relay to avoid spread of the virus.

The first doses of vaccines arrived in the Gaza Strip on Wednesday after Israel approved their delivery. There had been a heated debate over whether Israel bears responsibility for the health of Palestinians living in occupied territory.

President Biden said that every American who wanted a Covid-19 vaccination would be able to get one by the end of July.

Novak Djokovic, the No. 1 seed, will be facing a little known Russian player making his Grand Slam main draw debut, Aslan Karatsev. He has never been ranked higher than No. 111.

No fans have been allowed in the arena in recent days while the state of Victoria has been on lockdown. The restrictions, which began on Friday, sent spectators packing midway through a late-night game between Djokovic and Taylor Fritz. “It’s going to be a rough few days for I think everyone,” Serena Williams said.

If you have 4 minutes, this is worth it

In Rio, Covid jabs instead of samba

This time last year, Rio de Janeiro’s prime Carnival venue was a caldron of glitter-smeared bodies packed together, swaying to the beat of drums. But with a pandemic raging, the party is canceled.

Now, the main venue for samba, the Sambódromo parade grounds, above, hosts a vaccination site. Hildemar Diniz, a Carnival aficionado, said all the grief Brazilians are feeling will fuel a Carnival for the ages when it’s safe to party again. “People are thirsty for joy,” he said.

North Korea: Jang Jin-sung, the author of “Dear Leader,” has been accused of sexual assault by two women, including a fellow defector from North Korea. He has threatened to sue for defamation.

India #MeToo: A court in New Delhi on Wednesday acquitted an Indian journalist of defamation after she accused M.J. Akbar, a prominent former government minister and newspaper editor, of sexual harassment. The dispute was seen as a barometer of the country’s fledgling #MeToo movement.

Google in Australia: Just a few weeks after Google threatened to leave Australia if the government forced tech platforms to pay for news, the search giant is suddenly showering money on its most demanding critics. It may set a precedent for other countries.

Dubai princess: Sheikha Latifa, one of the daughters of the ruler of Dubai, drew headlines in 2018 when she sought to flee her country. In a new video, she said that she has been held in a virtual prison since her forced return. Her case has stirred outrage outside the United Arab Emirates.

Snapshot: Above, a funeral in Jerusalem. The coronavirus has devastated Israel’s ultra-Orthodox communities, which eschew social distancing. Our reporters look inside an insular culture that has been both a vector for the virus and its victim.

What we’re reading: This Condé Nast Traveler article compiling editors’ favorite global recipes. If you’re as tired of cooking as I am, and as desperate to travel again, this will do the trick!

Cook: Carnival king cake is more like a brioche, with a bitingly sweet frosting and sugared pecans for crunch.

Read: “Consent,” by Vanessa Springora, was a sensation when it was published in France last year. It is a memoir of abuse that has been praised for transcending its type.

Do: Here’s how to choose the right roses for your garden — and how to grow them sustainably.

How is your week going? Take some time to browse through our At Home collection of ideas on what to read, cook, watch, and do while staying safe at home.

About three decades ago, the Clinton White House established the first council for women and girls. It has been disbanded, and is now back. Our gender newsletter talked to the former secretary of state and presidential candidate.

Twenty-five years after your “women’s rights are human rights” speech in Beijing, should the discussion around women’s rights be reframed?

We needed to shift our attention and certainly our rhetoric from a rights-based framework to a power-based one. You cannot continue to argue about whether women deserve certain rights or not. The power imbalance that still exists is what I think has to be the basis for the debate going forward.

If you just call for equal pay, for example, and you don’t look at the disparities as to where women are working, which we’ve now seen painfully exposed because of the pandemic, then you’re missing the bigger picture.

Should the U.S. have a dedicated gender department, like the Office for Women in Australia or similar setups that other countries have adopted?

There are different approaches that are certainly worth looking at. But in this country right now, I think what we want to do is focus on getting results for people and not letting a bureaucracy become the goal. Because I don’t think most women would care about that. I think they would rightly say, “Well, how does that help me get better access to quality child care?”

Thank you
Carole Landry helped write this briefing. Theodore Kim and Jahaan Singh provided the break from the news. You can reach the team at [email protected]

P.S.
• We’re listening to “The Daily.” Our latest episode is about an energy crisis in Texas.
• Here’s our Mini Crossword, and a clue: Word that transitions good news to bad news (three letters). You can find all our puzzles here.
• Our Tokyo bureau chief, Motoko Rich, spoke to The Japan Times’s Deep Dive podcast about Yoshiro Mori’s sexist comments and what his resignation says about the status of Japanese women.