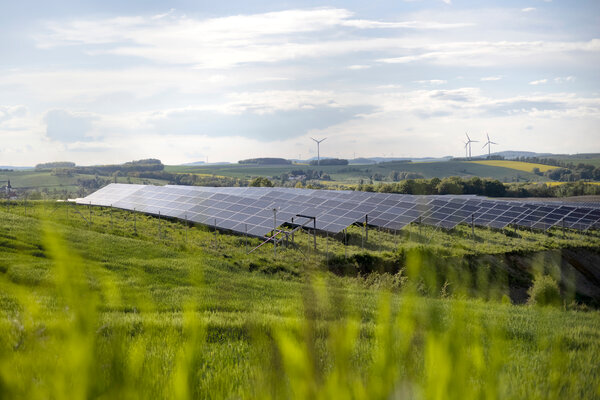 In what might be a seminal moment in the global effort to fight climate change, the bloc laid out an ambitious blueprint. The most radical, and possibly contentious, proposal would impose tariffs on some imports from countries with less strict rules on protecting the environment. It would also mean the end of sales of new gas- and diesel-powered cars in just 14 years.

If all goes through, airlines and cargo ships will require cleaner fuels. Steel makers and other manufacturers will need to pay more for emissions credits. Electricity producers will be pushed to speed up the switch to wind, solar and hydropower instead of coal.

The move is a big step toward a global goal of reaching a carbon-neutral economy by 2050. But it’s just the start of what will be a bruising two-year negotiation among industry, countries and the European Parliament.

U.S.: The Energy Department announced an effort in the push for an electric grid dominated by solar and wind — reducing the cost of batteries to store the power.

The test positivity rate has recently doubled, jumping to about 1.3 percent on average from below 0.6 percent. Case counts are still low, but their increase has been swift, to a streak of 400 or more a day from 200 a day just a few weeks ago.

But because some 64 percent of adults in the city are fully vaccinated, health experts don’t expect the recent increase to reach the levels seen in New York City’s first and second waves. The city is not yet considering reimposing restrictions or drastically changing its public health guidance. The seven-day average number of daily hospitalizations this week has stayed stable and remained under 20.

And although the Health Department has not yet released statistics on how many new cases are among people who are fully vaccinated, breakthrough infections are generally extremely rare. In Staten Island, where vaccination rates are lower, positivity rates tend to exceed the city average.

Context: The Northeast U.S. has relatively high rates of vaccination, but the pattern of protection is wildly uneven nationwide. Cases are rising rapidly in counties where less than 30 percent of residents have been fully vaccinated.

Quotable: “When you have populations of unvaccinated individuals, then the vaccines really can’t do their jobs,” said Stacia Wyman, an expert in computational genomics at the University of California, Berkeley. “And that’s where Delta is really a concern.”

Australian authorities extended Sydney’s lockdown at least until the end of the month.

Masks will stay mandatory on London’s public transit, even as England lifts restrictions.

The Taliban are strategically pressing provincial capitals like the northern city of Kunduz, which has suffered daily street battles for weeks. Vendors take cover during daily firefights with government forces, but reopen their stalls when the air clears.

“It’s permanent war,” said Mustafa Turkmen, a carpet seller. “No one can come here, and no one can leave. Every night when I wake up, I hear gunfire.”

The insurgent group is trying to tighten the noose around the capital, Kabul, by sewing up the countryside, cutting off the road network and squeezing the increasingly enfeebled central government. Civilians pay the price: Dozens have been killed and injured and up to 70 arrive at Kunduz Regional Hospital each day, the director said. More than 35,000 residents in and around Kunduz have been forced out of their homes, according to the U.N.

Elsewhere: In neighboring Helmand Province, the capital, Lashkar Gah, is on the verge of collapse, say members of the provincial council. On Wednesday, the Taliban said they had captured an important border crossing with Pakistan, the fourth crossing they have seized in less than a month.

Evacuations: The Biden administration will begin evacuating Afghans who aided the U.S. and are endangered by the troop withdrawal. Flights will begin the last week of July.

Pope Francis left the hospital and returned to the Vatican, 10 days after colon surgery.

Angela Merkel took a victory lap in her last visit to Washington as Germany’s chancellor.

Second basemen are getting larger, as game strategies evolve and double plays evaporate.

Major League Baseball pledged millions of dollars a year to build Black participation in the sport.

U.S. prosecutors charged four Iranians with conspiring to kidnap a journalist living in Brooklyn who had criticized Iran’s government.

The New York Police Department has cut back efforts to stop anti-Asian violence, even as people still live in fear.

Dozens of wildfires are burning in the U.S. The largest, the Bootleg Fire, has scorched more than 200,000 acres in Oregon.

In a viral video, thousands of fish drop from the belly of a plane to restock a Utah lake.

Guo Gangtang spent nearly 24 years biking across China to look for his kidnapped son. This week, the family reunited.

This year, two of China’s biggest films broke from the norm. Instead of chest-thumping odes to patriotism or intricately choreographed car chase scenes, they thoughtfully explored issues familiar to millions of women.

“Hi, Mom,” the top-grossing movie in China this year, is a comedic tear-jerker that portrays the complicated bond between a mother and a daughter. With domestic ticket sales of $840 million, it made the first-time director Jia Ling, a well-known comedian, the world’s highest-grossing solo female filmmaker.

“Sister,” directed by Yin Ruoxin, offered a somber, at times angry, meditation on the constant struggle between family obligations and career ambitions. The low-budget drama brought in over $133 million. Together they stand out as a rejection of the one-dimensional female roles often seen in commercial Chinese movies, challenging what it takes to conquer what is now the world’s largest film market.

And although the ruling Communist Party has been tightening its grip on culture, sometimes shunning China’s top female filmmakers and repressing feminist themes, these breakout films from female directors may have an undeniable commercial sway.

A splash of lemon juice balances the sweetness of this colorful homemade peach tea.

In “Perversion of Justice,” Julie K. Brown builds on her explosive, three-part investigation into Jeffrey Epstein’s case, explaining how she landed the story of a lifetime.

That’s it for today’s briefing. See you next time. — Amelia

The latest episode of “The Daily” is on the heat in the Pacific Northwest.

You can reach Amelia and the team at [email protected].