By Melina Delkic and Carole Landry

We’re covering the U.S. election, virus lockdowns in Europe and the battle for beet soup. 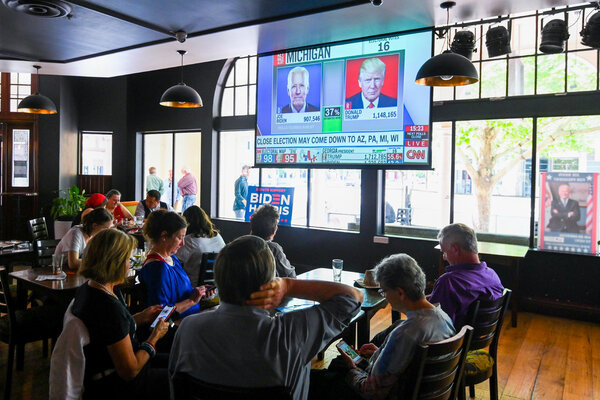 The world is waiting for U.S. election results

The stakes are global, and so is the audience.

In Australia and Indonesia, crowds gathered around televisions in cafes to steal a glimpse of American states turning red or blue. In Japan, Fuji Television covered the U.S. presidential election with graphics that mixed old-school cardboard cutouts with avatars common in video games.

In Asia, the first, incomplete election results came in while the markets were trading, setting off wild fluctuations.

The latest: At the time of this writing, the presidential race was too close to call, with key battleground states still counting ballots. Joe Biden flipped Wisconsin, and the Trump campaign said it would request a recount. Mr. Biden holds narrow leads in Michigan, Nevada and Arizona, while President Trump leads in Georgia and North Carolina. Many of the votes still being counted are mail-in ballots. The latest tallies are here.

Lockdowns, curfews and divisions in Europe

Across Europe, officials have been strengthening actions to prevent hospitals and health systems from becoming completely overwhelmed by the surge in coronavirus cases.

British lawmakers approved a new lockdown in England, in which people will be asked to stay home, with exceptions for school, certain jobs, food shopping or exercising. Prime Minister Boris Johnson has faced scalding criticism from the opposition who said he waited too long to act — and from others saying he went too far.

Mr. Johnson told Parliament on Wednesday that there was no alternative to a monthlong lockdown if the country wanted to avoid a “medical and moral disaster.” Britain has reported more than 60,000 deaths in total.

In Italy, a 10 p.m. curfew begins on Thursday, but the government aims for a targeted approach rather than a national lockdown. That hasn’t worked for countries like Germany and France, which had to resort to lockdowns in the end.

The scene: Discontent is mounting in Italy, with restaurant and bar owners taking to the streets in recent weeks. In France, a tense exchange took place in the National Assembly. The health minister, lashing out at critics of an extension of the state of the emergency, described hospitals filling and young people in critical care. “That’s the reality,” he said. “If you don’t want to hear it, get out of here.”

In China: Getting into the country will become even harder in Saturday, when new government rules require travelers to obtain not just a nucleic acid test for the coronavirus but also a blood test for antibodies against the virus, both performed less than 48 hours before departure and both needing approval by a Chinese embassy or consulate.

What about global warming?

On Wednesday, the United States officially withdrew from the Paris Agreement, the global pact aimed at averting catastrophic climate change.

If President Trump wins re-election, it would very likely seal the isolation of the U.S. for the next four years from the nearly 200 other nations committed to reducing greenhouse gas emissions.

If Joe Biden wins and rejoins the accord, as he has promised, the United States would find that it has a lot of catching up to do.

Other nations: China, Japan and South Korea have all put in place more ambitious plans to reduce their own emissions of planet-warming gases. Those commitments, and others by Britain and the European Union, mean that nearly half of the world’s carbon dioxide emissions are now covered by net-zero emissions targets, according to Carbon Brief, a climate analysis site.

If you have 3 minutes, this is worth it

The best town crier in Mexico

Cemeteries were closed on the Day of the Dead because of the pandemic, depriving Mexicans of mourning rituals. But one town went ahead with an online version of its annual weeping competition. Participants submitted videos, some screaming with the gusto of a telenovela star.

One woman bawled about the onset of menopause. “You were always so punctual,” she wailed. “And then one day, without saying anything, you never came back.” Many saw it as cathartic and a nod to the tradition of finding comedy in tragedy.

Brazil inquiry: Flávio Bolsonaro, President Jair Bolsonaro’s oldest son, has been charged with graft and money laundering as part of an investigation into the theft of public funds.

India anchor’s arrest: Arnab Goswami, one of the country’s most famous television journalists and a strong backer of Prime Minister Narendra Modi’s ruling party, was charged with abetting a 2018 suicide in Mumbai, a city controlled by an opposition party. Some saw a parallel to pressure that the Modi administration has put on progressive journalists elsewhere.

North Korean defector: After an extensive manhunt, the South Korean military on Wednesday found and detained a man from the North who crossed the countries’ heavily armed border.

Ethiopia conflict: Prime Minister Abiy Ahmed ordered military action against the regional government in Tigray, in the country’s north, early Wednesday, accusing it of attempting to provoke a war by orchestrating an attack on an army base there. Phone and internet service was reportedly cut, and Mr. Abiy’s government gave itself sweeping emergency powers over the region.

Snapshot: Above, Olha Habro, 76, cooking borscht in the town of Borshchiv, Ukraine — one of a dozen villages and cities in Ukraine named for the beet soup. Borscht is the subject of a dispute between Ukrainians and Russians, who both claim it as their own.

What we’re reading: This moving read from Bicycling magazine, about a man’s quest to cycle the Swiss Alps, and how it relates — or doesn’t — to his relationship with his late father.

Cook: Rustic with deep flavor, this smoky lentil stew with leeks and potatoes improves after a day in the fridge.

Watch: Our streaming picks in Australia for this month include “The Crown,” “Hillbilly Elegy” and “Small Axe.”

Do: We look at three methods of controlled breathing that can help reduce stress, increase alertness and boost the immune system.

Take some time to explore our At Home collection for more ideas on what to read, cook, watch, and do while staying safe at home.

Moments from the U.S. campaign trail

After covering the epic race for the American presidency, 16 Times journalists shared some of their memorable experiences. Here is an excerpt from what they wrote for Times Insider.

The night before Super Tuesday in early March, I took my then-7-year-old daughter with me to East Los Angeles for an Elizabeth Warren campaign rally I was covering. For months, my daughter had listened to me describe scenes and politics she didn’t really understand. By then, it was clear that Senator Warren, the last woman standing, would not succeed in getting the Democratic nomination.

My daughter was mostly in awe of my friends working for the television networks, as they stood in the stands with their cameras and laptops. That press corps was mostly young women, who were exceedingly generous to a second grader. The night was a moment for her to witness history, and women’s roles in it. — Jennifer Medina

In February, I was in a New Hampshire ballroom with Andrew Yang, the long-shot candidate I had been covering for months, when he announced that he was dropping out of the Democratic primary. You could feel the room deflate as soon as he said the words.

Soon after he exited the stage, I met Gene Bishop, an 81-year-old New Hampshire voter who told me he had never contributed to or canvassed for a political candidate before he began supporting Mr. Yang. “I just can’t believe that it’s over,” Mr. Bishop said, his brave face melting away. Then, to my surprise, he began to cry. It’s easy to get jaded about politicians. But my brief interview with Mr. Bishop has stuck with me. — Matt Stevens

You can check for the latest on the U.S. election on our results page. See you next time.

P.S.
• We’re listening to “The Daily.” Our latest episode is about the unfinished U.S. election.
• Here’s our Mini Crossword, and a clue: Hop happily (four letters). You can find all our puzzles here.
• Our science reporter Apoorva Mandavilli recently joined The Daily Dive to discuss coronavirus antibodies.