A brutal killing in France prompts a swift official response.

We’re covering France’s crackdown on Muslims accused of extremism, a clash over coronavirus restrictions in England and the discovery of a very, very old cat. 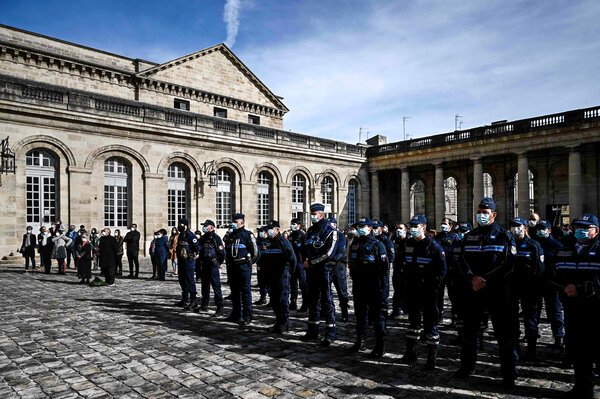 France’s crackdown on ‘the enemy within’

The brutal killing of Samuel Paty, a teacher in a suburb north of Paris who showed a classroom caricatures of the Prophet Muhammad, has reopened old wounds in France — and prompted a swift official response.

On Monday, the country unleashed a broad crackdown on Muslims accused of extremism, carrying out dozens of raids, vowing to shut down aid groups and threatening to expel foreigners.

Over the weekend, thousands of people took to the streets to express their horror at the killing on Friday. And politicians, especially on the right, jostled to sound the alarm against “the enemy within,” as the hard-line interior minister, Gérald Darmanin, put it in a radio interview, referring to so-called radicalized Muslims.

Go deeper: Many of those swept up in raids were already in police files for showing “signals” of potential radicalization, like preaching radicalized sermons or sharing hateful messages on social networks, government officials said. But other targeted groups included Muslim associations that had previously been given government subsidies for their work promoting better civic relations.

The mayor of Greater Manchester, Andy Burnham, has spent days warring with Prime Minister Boris Johnson of Britain over the government’s plan to impose the highest level of coronavirus restrictions on hard-hit Manchester, shuttering pubs, bars and gyms and forbidding all socializing by people from different households.

Mr. Burnham says the restrictions would devastate the city’s economy and that the central government has not offered adequate financial aid to the people who would lose their jobs during the lockdown. He has been a nearly ubiquitous presence on television, waging a fierce rebellion on behalf of his 2.8 million constituents.

Analysis: The standoff reflects mounting frustration with Mr. Johnson’s erratic, often opaque handling of the pandemic, as well as the long-held grievances of people in the old industrial cities of northern England toward the wealthier — and more powerful — south.

Related: Museums in Europe have reopened, but visitors have not come back in high numbers. Institutions are reporting only about one-third of the visitors they had last year. Even government bailouts may not be enough to make up for the drop in ticket sales.

Poland’s deputy prime minister and de facto leader, Jaroslaw Kaczynski, is going into quarantine after learning that he had been in contact with someone infected with the coronavirus.

Officials in Melbourne, Australia, eased a lockdown, allowing residents to travel up to 25 kilometers from their homes and permitting up to 10 people from two households to socialize outdoors.

Twenty-five crew members aboard a livestock carrier docked at a port in Western Australia have tested positive for the virus.

South Africa’s health minister, Dr. Zwelini Mkhize, said that he and his wife, Dr. May Mkhize, had tested positive for the virus and that he was optimistic they would “fully recover.”

The Justice Department announced indictments of six Russian military intelligence officers in connection with a worldwide hacking campaign, accusing them of attacking targets including the opening ceremony of the 2018 Winter Olympics, the French presidential election and Ukraine's power grid.

Prosecutors said the suspects were from the same Russian unit that conducted one of the Kremlin’s major operations to interfere in the 2016 U.S. election — the theft of emails aimed at embarrassing Hillary Clinton.

Details: The 2018 attack on the Olympics in Pyeongchang, South Korea, took out internet access and telecasts, grounding broadcasters’ drones and preventing spectators from attending the opening ceremony. Security experts labeled the attack Sour Grapes because they believed it was conducted by Russians out of spite over a ban on Russian athletes.

European interference: The Justice Department said the hackers released stolen documents in 2017 to try to hurt Emmanuel Macron in his presidential race in France against Marine Le Pen, a far-right candidate supported by Moscow. They are also accused of hacking Ukraine’s Parliament, finance ministry and electrical grid.

If you have 5 minutes, this is worth it

Yamouneh, a village in the Bekaa Valley of Lebanon, above, has long relied on its cannabis industry. But for the first time since farmers began growing the crop two decades ago, they are reconsidering their dependence on hashish.

The pandemic, the country’s economic crisis and the war in Syria, which has snarled smuggling routes, have erased profits. Now, the drug earns so little that some growers in Yamouneh doubt that it is still worth producing.

“It’s over,” said the village chief. “Now, growing hashish is a hobby.”

China economy: As most of the world still struggles with the pandemic, China’s economy is growing. It surged by 4.9 percent in the July-to-September quarter, compared with the same period last year, suggesting that a fast economic rebound is possible when the coronavirus is brought firmly under control.

Narwhal tusk: Queen Elizabeth II has approved a rare royal pardon for an inmate convicted of murder who used a whale tusk — displayed as a wall decoration during a conference, which he was attending on a day-release program — to help stop a lethal terrorist attack in London in late 2019.

Snapshot: Above, the figure of a lounging cat, etched into the side of a hill in Nazca, Peru. Archaeologists discovered the 40-yard-long, 2,000-year-old drawing at the UNESCO heritage site known as the Nazca Lines.

Lives Lived: Ed Benguiat, the celebrated graphic designer behind more than 600 typefaces — including the ones you see at the top of the print and web editions of this newspaper, and in the title sequence of the Netflix series “Stranger Things” — died at 92 last week.

What we’re reading: This New Yorker interview with the Russian opposition leader Aleksei Navalny. “This takes you inside Navalny’s hospital room and the aftermath of his coma in specific details, including the fact that he was watching ‘Rick and Morty’ on the plane when he started feeling ill,” writes Claire Moses, from The Morning.

Cook: This lentil and orzo stew with roasted eggplant is rich, comforting and good for leftover lunches.

Listen: Bruce Springsteen’s new album with the E Street Band, “Letter to You,” is built on lessons and skills accumulated in the past. But the Boss is focused on where he stands now — and where he’s going next, writes our critic.

Do: When you’re choosing a bed, think big, even in small spaces. Here’s our shopping guide.

Take a break from work when you can. At Home has our full collection of ideas on what to read, cook, watch and do while staying safe at home.

Backyard birding might be the perfect pandemic pastime. If you don’t have access to a backyard, a porch or a rooftop will do. Here are steps to kick-start your birding.

Set the table. Drawing a large and varied population requires multiple feeders, each offering treats meant to attract certain species. Tubular ones, fitted with perches too small for large birds and filled with mixed-seed finch food, will attract finches and other small birds. A feeder with perches spacious enough for large birds, filled with a wild bird food blend that is rich with nuts, fruit and sunflower seeds, will attract cardinals, blue jays, grackles and other big birds.

Have patience. It can take weeks for birds to discover their free buffet, but once your feeders are established, you’ll see birds you haven’t seen before. While you sit back and wait, read a field guide or download the Audubon Bird Guide app to learn about your new feathered guests.

Get a closer look. Observing birds with the naked eye is entertaining, but most birders use binoculars. You can buy a good pair for less than $150, or you can spend $3,000 on the best models. Look for models that provide 8x magnification or more, so a bird will appear at least eight times as large when viewed through them as when viewed with the naked eye.

Or take a picture. If you’d like to photograph the birds, start with your smartphone. For more professional results, you’ll need a high-resolution 35 millimeter digital camera and a telephoto lens. But even if you buy used equipment, expect to pay at least $500.

Thanks for starting your day with The New York Times.

P.S.
• We’re listening to “The Daily.” Our latest episode is about whether Hispanic voters can flip a historically Republican state for the Democrats.
• Here’s our Mini Crossword, and a clue: “+” (three letters). You can find all our puzzles here.
• Monty Python’s killer bunnies don’t exist — but venomous slow lorises, who pair cartoonishly big eyes with flesh-rotting venom, most certainly do.
• Several Times pieces were featured on New York University’s list of the 10 greatest works of journalism in the past decade.