In England, a sharp rise in coronavirus cases.

We’re covering the adjustment of virus restrictions in England, Big Tech’s lobbying efforts in Brussels and the subtle charms of fugu. 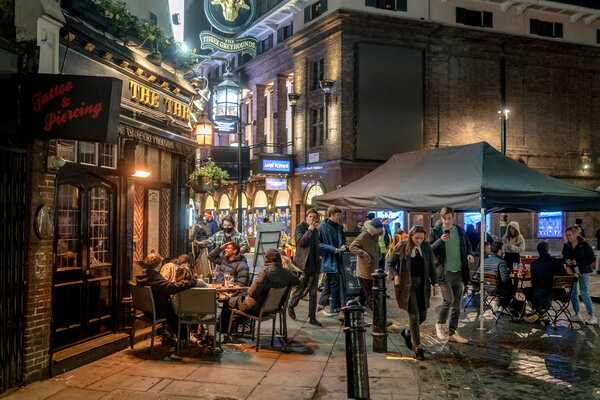 Pubs, restaurants and theaters in London will close once again as the British government tightens restrictions in the capital, as well as parts of southern England, because of a “very sharp, exponential rise” in coronavirus cases. Health authorities said they had identified a new, faster-growing variant of the virus.

Prime Minister Boris Johnson, already facing a tough week as Brexit trade negotiations continue, risks additional wrath from members of his Conservative Party over the restrictions. Some questioned the logic of imposing a lockdown now when the government plans to ease restrictions so families can reunite in the days around Christmas.

We asked readers to send us questions about the new vaccines. Here are the answers.

The first shots were given in the American mass vaccination campaign on Monday morning. President Trump delayed plans for White House staff members to get early vaccines.

The coronavirus death toll in the U.S. passed 300,000. Over the past week, there has been an average of 210,112 new cases per day, an increase of 30 percent from the average two weeks earlier.

The European Union on Monday unveiled a mobile app aimed at facilitating safe travel within the Schengen zone. The app, called Re-open EU, is intended to help residents of Europe navigate different national restrictions, as well as quarantine and testing requirements.

The Netherlands will lock down for at least five weeks to limit the spread of the virus, Prime Minister Mark Rutte announced.

In New York City, indoor dining has been halted until a spike in Covid-19 cases subsides. Thousands of restaurants face an uncertain future as they brace for winter months that could reduce business to new lows.

The Electoral College affirms Biden as the next president

In a crucial milestone for Joe Biden, the Electoral College on Monday voted in key battleground states with no surprises or defections. Electors in states that President Trump had contested — Pennsylvania, Michigan, Wisconsin, Georgia and Arizona — voted for Mr. Biden, while California’s votes pushed him past the 270-vote threshold needed to win the presidency.

With high stakes for both parties, early voting began in the Georgia runoff elections for the U.S. Senate. The latest polls narrowly favor the two Democratic candidates.

Quote: “Faith in our institutions held. The integrity of our elections remains intact,” the president-elect said in an address. “And so, now it is time to turn the page. To unite. To heal.”

Next steps: Can Congress overturn the Electoral College results? Probably not. But Mr. Trump’s most faithful followers still believe he is the rightful winner. What becomes of their skepticism has important implications for democracy.

Companies like Amazon, Apple and Google are spending more than ever on lobbyists to stop European Union regulation against them, hiring former government officials, well-connected law firms and consulting firms and spending millions in the first half of 2020.

Despite the campaign, the industry has had few major successes. European leaders have denounced the companies as threats to democracy and anticompetitive, and have taken steps to rein them in. Amazon, Apple, Google and Facebook either are under antitrust investigation or have already been penalized billions of dollars. In recent years, the European Union has adopted industry-opposed laws on issues including privacy and online copyright.

Related: Google services including Gmail, Hangouts, Meets and YouTube went offline on Monday, halting workplaces and classrooms around the globe. The company attributed the problem to an “authentication system outage” that lasted for about 45 minutes.

If you have 10 minutes, this is worth it

The understated charms of a potentially lethal delicacy

Eating fugu has been a perilous act for most of human history. But in Japan, where it’s against the law to serve the fish without a license, the danger is limited — and, even more so of late, with the rise of farmed fugu believed to be entirely toxin-free.

Despite cultural concerns about the risk of poisoning, Westerners who chronicle their first taste of fugu tend to dismiss it as bland. Perhaps the experience is so subtle as to be illegible to someone from another culture, suggests our writer.

Aleksei Navalny: Officers from a secret Russian spy unit trailed the Russian opposition leader for years and were nearby at the time he was exposed to a toxic nerve agent that almost killed him last summer, according to a new report, in the strongest evidence so far of Moscow’s involvement in the attack.

Blood donation: Britain announced on Monday that starting next year it would allow gay and bisexual men who have had the same sexual partner for more than three months to donate blood, in a significant easing of restrictions.

U.S.-Turkey relations: The Trump administration on Monday issued sanctions against Turkey’s military acquisitions agency to punish the NATO ally, more than three years after it bought a missile defense system from Russia.

Chinese goods: Chinese exports to the U.S. climbed 46.1 percent in November to a record $51.98 billion, defying the expectations of American politicians who had predicted that the pandemic would be a moment to reduce trade with China.

Snapshot: Above, retrieving a coffin during a ceremony in Lembang Ma’dong, Indonesia. The Toraja people of southern Sulawesi, one of the country’s largest islands, are known for their elaborate death rituals. The bodies of the deceased are kept at home, sometimes for years, until the family has enough money to pay for a funeral.

Lives lived: The Cambodian-American writer Anthony Veasna So, whose his first book was to be published next August, has died at 28, on the brink of literary stardom.

What we’re looking at: This week’s New Yorker cover by the artist David Hockney, accompanied by a Q. and A. with the artist. He reminds us that creativity doesn’t have to be limited to long-revered mediums — he’s painted hundreds of works this year on his iPad.

Cook: Spread this roasted carrot salad across a platter for a light dinner or lunch — and don’t worry if you can’t find all the herbs. Just one or two will bring pleasure.

Cozy up: Stream productions of reimagined fairy tales and Christmas standards like “A Christmas Carol” from theaters around the world.

Listen: Need a soundtrack to the holidays? Here are 20 seasonal records that won’t disappoint.

It’s almost the end of the year. Let our At Home collection of ideas on what to read, cook, watch, and do take the stress out of staying indoors.

Tips from a TikTok doctor

As coronavirus vaccinations get underway in some countries, our OnTech newsletter spoke with the Philadelphia-based doctor Austin Chiang, who tries to supply health information to people by meeting them where they are — often, on social media.

Why do you make TikTok videos?

Part of what I’m trying to do is humanize our profession. I try to showcase being fun but also professional, and hopefully people can learn something.

As doctors, we don’t get any marketing or communications training, and yet we’re expected to contribute to our community and to public health. We’re going to have to meet patients where they are, and communicate information in interesting and digestible ways.

The approach that I try to take is to leave room for the gray. If you say vaccines don’t cause any harm and are the best things in the world, it can alienate people who are vaccine hesitant. If we instead acknowledge that there are potential risks just like anything else in medicine and life, it’s a more effective message.

That’s it for this briefing. Have a great day.

Thank you
Theodore Kim and Jahaan Singh compiled the break from the news. You can reach the team at [email protected]

P.S.
• We’re listening to “The Daily.” Our latest episode is on the U.S. approving a vaccine and what happens next.
• Here’s our Mini Crossword, and a clue: Word after jelly or coffee (four letters). You can find all our puzzles here.
• The word “elephantless” first appeared in The Times on Monday, according to the Twitter bot @NYT_first_said.
• Our White House reporter Maggie Haberman recently appeared on NPR’s “Fresh Air” to talk about the Trump era.