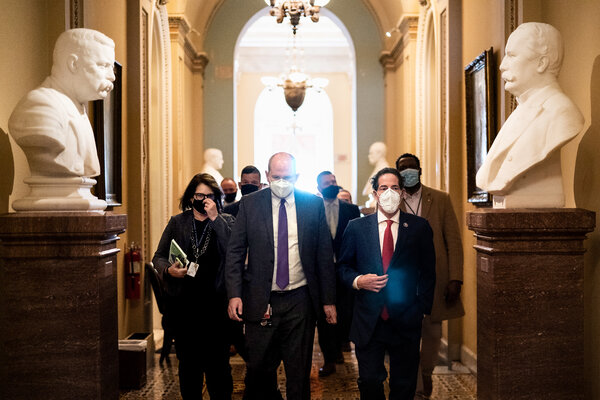 Lawyers for Donald Trump yesterday denounced the impeachment case against him as partisan “political theater,” arguing that he bore no responsibility for the deadly assault on the Capitol and that trying a former president was unconstitutional.

The arguments constituted Mr. Trump’s first sustained defense since the violence of Jan. 6 and came on the same day that Senate leaders agreed to rules for a swift impeachment trial. The proceedings are set to begin today with a debate and a vote on the constitutionality question.

In a memo, House impeachment managers rebutted the assertions of Mr. Trump’s lawyers by saying, “There is no ‘January exception’ to the Constitution that allows presidents to abuse power in their final days without accountability.” If a simple majority of senators agree to move forward after the debate, as expected, the prosecution and the defense will have up to 16 hours each to present their cases starting at noon on Wednesday.

Timeline: Here’s how Mr. Trump’s second impeachment has unfolded so far, and what may be yet to come.

Solidarity costs the E.U. speed in the push for vaccines

In the vaccine race, the European Union continues to lag Britain and the United States, both of which were less disciplined in their lockdowns and pandemic precautions.

The E.U. bungled many of the early steps to procure vaccines. It was slower off the mark while overly focused on prices,and it succumbed to an abundance of regulatory caution. A cumbersome attempt to cast the lot of all 27 countries in the bloc together has also slowed the process.

For the bulk of E.U. nations, that experiment has been beneficial. It has not necessarily, however, been greeted happily in the wealthiest countries, and it has left leaders like Chancellor Angela Merkel of Germany and President Emmanuel Macron of France open to criticism at home.

By the numbers: Just over 3 percent of E.U. nationals had received at least one dose of a vaccine by the end of last week, in stark contrast to 17 percent of Britons and 9 percent of Americans.

Facebook said it would remove posts with false claims about vaccines. “Building trust and confidence in these vaccines is critical,” the company said in a blog post.

The Australian Open began in Melbourne on Monday after a three-week delay because of the pandemic. The number of spectators has been capped at 30,000 per day, or about half the usual attendees.

With a general election just weeks away, Prime Minister Benjamin Netanyahu of Israel attended the resumption of his trial on corruption charges. The hearing was largely administrative, and Mr. Netanyahu spoke briefly to plead his innocence. Few world leaders have ever stood trial while in office, let alone while running for re-election.

“I confirm the response that was filed in my name,” he said, referring to a written plea that his lawyers entered weeks ago.

Mr. Netanyahu faces multiple charges. He is accused of granting political favors to businessmen in exchange for gifts worth several hundred thousand dollars, as well as of having sought favorable coverage from major news outlets in exchange for regulatory changes that benefited their owners.

Next steps: If convicted, Mr. Netanyahu could face several years in prison, but a verdict is not expected for months, if not years. The trial has been delayed several times by coronavirus restrictions — and it may yet be delayed again.

If you have 7 minutes, this is worth it

The pandemic has sped up defections from the ultra-Orthodox community in Israel, which makes up 12 percent of the country’s population. With their religious routines disrupted by lockdowns and school closings, and with more time at home for self-discovery, some Haredi Jews are making the decision to exit the community and embrace a more secular lifestyle.

But for many, breaking away means leaving a tight-knit support system for an unfamiliar culture. In extreme cases, parents sit shiva for children who leave, observing the traditional mourning rituals as if they were dead.

Bitcoin: Tesla said it expected to start taking the cryptocurrency as payment “in the near future.” In its annual report, the carmaker disclosed that it had bought $1.5 billion worth of Bitcoin as part of an initiative to invest in alternative assets.

Green energy: The giant oil companies BP and Total won the largest share of options to build new offshore wind farms awarded by Britain, investments that are expected to eventually total in the tens of billions of dollars.

Libel lawsuit: Two researchers are on trial for writing that a long-dead Polish mayor was complicit in a Holocaust massacre in the village of Malinowo. Critics say the government is trying to emphasize Polish suffering in World War II and downplay complicity in Nazi crimes.

Censorship in China: Until official censors cracked down on Clubhouse, the app provided a rare opportunity for cross-border dialogue on contentious topics free from Beijing’s usual tight controls. To many users in mainland China, it was a brief window into an unfettered social media.

Snapshot: Above, revelers in Tampa, Fla., after the Super Bowl on Sunday. Though the crowd was limited to roughly one-third of the stadium’s capacity and fans were encouraged to watch alone at home, many still congregated, raising fears that the event may help spread the coronavirus.

What You Need to Know About the Vaccine Rollout

Opinion | Just When You Thought Politics Couldn’t Unravel Any Further

Opinion | The House That Rush Built