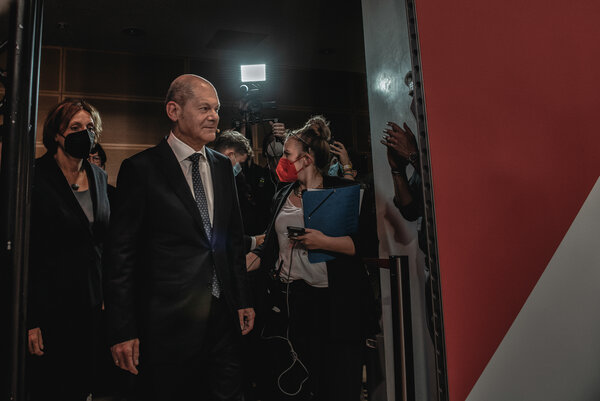 The race to replace Angela Merkel

Despite earning the most votes in Germany’s election over the weekend, Olaf Scholz, the leader of the center-left Social Democrats, is not yet assured of becoming chancellor. Instead of two dominant parties competing to go into coalition with one partner, four midsize parties are jockeying for a place in government.

Scholz most recently served as the vice chancellor and finance minister in Angela Merkel’s departing government. In this election, he succeeded in persuading voters that he could provide stability and continuity. He campaigned on raising the minimum wage, strengthening German industry and fighting climate change — all mainstream positions.

Scholz has been a familiar face in German politics for more than two decades, but it’s hard to know what kind of a chancellor he would be. A fiery young socialist in the 1970s, he gradually mellowed into a post-ideological centrist, to the right of significant parts of his party. His party’s surprise revival in the election rested heavily on Scholz’s personal popularity.

Next steps: The next chancellor will have to get at least three different parties behind a governing deal, giving Scholz’s conservative runner-up, Armin Laschet, a potential path to the top job.

Representation matters: Tessa Ganserer and Nyke Slawik both won seats in the election, making history as the first two openly transgender people to join the German Parliament. Both belong to the Greens Party.

Mohammed Ashraf Ghairat, the Taliban’s new chancellor for Kabul University, announced yesterday that women would be barred from the institution as instructors or students. “As long as a real Islamic environment is not provided for all, women will not be allowed to come to universities or work,” he said in a tweet. “Islam first.”

Some female staff members, who have worked in relative freedom over the past two decades, pushed back against the decree. “Presidents, teachers, engineers and even mullahs are trained here and gifted to society,” said one female lecturer. “Kabul University is the home to the nation of Afghanistan.”

In the days after the Taliban seized power, officials insisted that this time would be better for women. But the new university policy echoes mandates from the Taliban’s first stint in power, in the 1990s, when women were kept from school and allowed in public only if accompanied by a male relative.

Back story: Two weeks ago, the Taliban replaced the president of Kabul University, the country’s premier college, with Ghairat, a devotee of the movement who has referred to Afghanistan’s schools as “centers for prostitution.” Professors and lecturers from across the country have fled their posts in anticipation of more stringent regulations from the Taliban.

Risks ahead for the global economy

For months, the world economy has expanded at a torrid pace, as industries that were shut down in the coronavirus pandemic reopened. But further healing appears likely to be more gradual, and in some ways more difficult, as supply shortages continue to hold back many parts of the economy.

A range of risks, including the hard-to-predict dynamics of coronavirus variants, could upset the transition to a healthy post-pandemic economy. Political factors also play a role: In the U.S., a standoff over raising the federal debt ceiling could bring the nation to the brink of default. And in China, the fallout from the property developer Evergrande’s financial problems are raising questions about the country’s debt-and-real-estate-fueled growth.

Unlike in the recovery from the 2008-9 global financial crisis, companies report that they are struggling to find enough workers and raw materials to meet demand. Such strains are, in effect, acting as brakes that slow the expansion. The question is how much, and for how long, those brakes will be applied.

By the numbers: The O.E.C.D. projected last week that the world economy would grow by 4.5 percent in 2022, downshifting from an expected 5.7 percent in 2021. Its forecast for the U.S. shows an even steeper slowdown, from 6 percent growth this year to 3.9 percent next.

Tens of thousands of health care workers in New York appeared to be risking their jobs by defying a state mandate to receive a vaccine dose by yesterday.

President Biden received a booster shot of the Pfizer-BioNTech vaccine.

Three months after Sydney, Australia, locked down to contain its latest coronavirus outbreak, the authorities have outlined a path to reopening.

News From the U.S.

The singer R. Kelly was found guilty of being the ringleader of a scheme to recruit women and underage girls for sex. He faces the possibility of decades in prison.

Senate Republicans blocked a bill to avert a government shutdown and a debt default in an effort to undercut President Biden and top Democrats.

Murders spiked last year across the U.S., which saw the largest increase since national record keeping began in 1960, according to figures released by the F.B.I.

The growth of renewable energy in Scotland, especially the fleets of wind turbines along its coastline, may provide a pathway for gradually replacing the country’s struggling oil and gas industry.

Gas stations across Britain continue to run dry, upending the routine journeys of thousands of people. Officials said there was no shortage of fuel and blamed panic buying for the problems.

China said it was cracking down on “medically unnecessary” abortion, prompting fears about privacy in a country with a history of intrusive reproductive health measures.

Hakuho, the most accomplished sumo wrestler in history, is retiring from the sport at age 36.

Facebook has paused development of an Instagram app for children under 13, as the company increasingly faces questions about the app’s effect on young people’s mental health.

“Moulin Rouge!” and “The Inheritance” took the top honors at the Tony Awards on Sunday night.

Food can inspire strong emotions. And sometimes the container it comes in can evoke an even stronger response.

Royal Dansk tins, Cool Whip tubs, Dannon yogurt containers and Bonne Maman jam jars all belong to an unofficial hall of fame of receptacles that have been redeployed for myriad uses, giving them countless afterlives and often imbuing them with special meaning.

At a recent concert at the Royal Albert Hall in London, nearly 6,000 attendees, some wearing suits and ties and others dressed in cosplay as their favorite video game characters, came to see an orchestra and choir perform music from Final Fantasy VII, released in 1997 on PlayStation.

The first installment of the Final Fantasy series, released in 1987, had just a handful of electronic sounds. As technology evolved, so did the music, and by the late 1990s the games featured live orchestral recordings. Nobuo Uematsu, who composed scores for the first nine installments of Final Fantasy, drew on influences as varied as Led Zeppelin, Elton John, Celtic music and classical music.

The soundtracks to the games are enormously popular: Since 2007, there have been more than 200 official Final Fantasy concerts across 20 countries. At the opening ceremony of the Tokyo Olympics this past summer, some athletes marched to Final Fantasy songs. On YouTube, fans post covers, tutorials and their own compositions.

“There are some melodies I composed almost 30 years ago I’ve almost forgotten,” said Junya Nakano, who worked with Uematsu on the score for Final Fantasy’s 10th installment. “But fans are still playing them.”

Blistered shishito peppers, served with little more than a sprinkle of salt, are finger food at its best.

Inspired by a short story by Emma Braslavsky, the German-language film “I’m Your Man” is a cool and clever sci-fi love story.

And here is the Spelling Bee.

The latest episode of “The Daily” is on the Haitian migrant crisis at the U.S. border.

Sanam Yar wrote today’s Arts and Ideas. You can reach Natasha and the team at [email protected].