Germany’s far right, Belarus, coronavirus in Spain: Here’s what you need to know.

We’re covering President Trump’s role in the German far right, the disappearance of a Belarusian protest leader and the return of a long-lost Judean date. 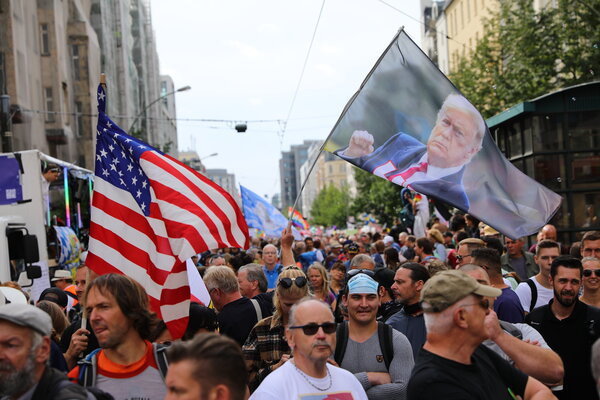 For German far-right activists, Trump is an inspiration

As hundreds of far-right activists in Berlin tried to storm the German Parliament last month, they had a surprising guest star: President Trump.

Though Mr. Trump was far from Germany on that day, his presence was nonetheless conspicuous — on banners, on T-shirts and even on Germany’s pre-1918 imperial flag, which was popular with neo-Nazis in the wider crowd of 50,000 who had come to the capital to protest pandemic restrictions.

Though Mr. Trump is broadly unpopular with Germans, according to opinion polls, his unvarnished nationalism and tolerance of white supremacists, coupled with his skepticism of the pandemic’s dangers, resonate with certain fringe groups, for whom he has become “a savior figure,” according to one expert on far-right extremism.

Quotable: “We have everything from anti-vaxxers to neo-Nazis marching against corona measures,” said Matthias Quent, the director of an institute that studies democracy and civil society. “The common denominator is that it’s people who are quitting the mainstream, who are raging against the establishment.”

With large-scale demonstrations showing little sign of winding down, President Aleksandr Lukashenko’s security forces appear to have shifted from mass repression to more targeted measures. Maria Kolesnikova, the last prominent protest leader in Belarus still at large, is the latest to disappear, reportedly grabbed off the street by masked kidnappers in the center of Minsk on Monday, bundled into a dark minivan and driven away at high speed.

In a Twitter post, Linas Linkevicius, the foreign minister of neighboring Lithuania, described Ms. Kolesnikova’s disappearance as a “kidnapping” and suggested that “Stalinist N.K.V.D. methods” — a reference to the predecessor to the K.G.B. — were “being applied in 21st century’s Europe.”

Analysis: By stripping the opposition of its leadership, Mr. Lukashenko apparently hopes to gradually stall the demonstrations’ momentum, allowing his security forces to frighten those who continue protesting with the threat of mass arrests. Other prominent opponents have been pressured to flee to either Lithuania or Poland, both members of NATO, and then painted as traitors working with Western powers to undermine both Belarus and Russia.

Spain reported 525,549 total cases on Monday, according to a New York Times database, making it the only country in western Europe to exceed the half-million mark. Spain had already been one of the hardest-hit countries in Europe, and its rapid reopening, including the return of nightlife and group activities, may have contributed to the epidemic’s resurgence.

But the second wave seems less terrifying than the first, with a mortality rate roughly half that at the height of the crisis, falling to 6.6 percent from the 12 percent peak in May. The median age of people who tested positive has also dropped, to around 37 from 60. Still, experts fear that the growing number of cases could signal a new surge across the continent.

In other developments around the world:

Denmark announced on Monday that it would halve the limit on the size of public gatherings, to 50 from 100, in Copenhagen and other cities in response to a rise in cases.

Australia on Monday announced deals to buy almost 85 million doses of two promising coronavirus vaccines if their trials prove successful. They would be provided free to Australia’s 25 million people at a cost of $1.2 billion.

Long-haul patients have begun to open up about how their mental health has suffered because of the virus. They are grappling with depression, anxiety and fatigue.

If you have 5 minutes, this is worth it

The resurrection of a hallowed fruit

It has been hailed as a modern miracle of science. At a kibbutz in Israel, for the first time in hundreds of years, a honey-blond Judean date was plucked from its tree — grown from a 2,000-year-old seed retrieved from an archaeological site in the Judean wilderness — and, eventually, placed into a waiting mouth.

The verdict? “Lucky, it tasted good,” said Elaine Solowey, an expert on arid agriculture who helped bring back the lost fruit. “If it had been awful, what would I have said? That in the old days they didn’t know what a good date was? There’s a lot of literature about how they were the best dates in the world.”

Jacob Blake: In a video recorded from his hospital bed, Mr. Blake, a Black man who was shot in the back by a white police officer in Kenosha, Wis., spoke publicly for the first time. “Every 24 hours, it’s pain — it’s nothing but pain,” he said.

Jamal Khashoggi: A Saudi court has issued final verdicts in the killing of the dissident writer. Five of the eight defendants were sentenced to 20 years in prison each, two were given 17-year sentences and one was given a 10-year sentence. The Saudis have never released the defendants’ names.

Aleksei Navalny: The Russian opposition leader is no longer in a medically induced coma, according to the German doctors treating him in Berlin for a suspected poisoning. They added that it was too early to determine whether he would suffer long-term effects.

California wildfires: For the second time in the U.S. since 2017, a gender-reveal party — at which an unborn baby’s sex is exuberantly revealed — has ignited a wildfire that consumed thousands of acres, the authorities said.

Snapshot: Mask-wearing music enthusiasts, above, gathered in Halberstadt, Germany, on Saturday to hear a chord change in the very long, very slow performance of a piece by the American composer John Cage — which is scheduled to run until 2640. It was the 14th chord change since the concert began in 2001.

Lives lived: Constance Weldon, who died last month at 88, is believed to have been the first woman tubist — that is, a tuba player — to earn a position in a major American symphony orchestra. It took 50 years for another woman to become the second.

What we’re reading: This Axios roundup of pandemic changes we might want to keep. It’s a good reminder of the little slivers of silver linings this year.

Cook: Jacques Pépin’s take on pissaladiere turns the Niçoise version of pizza into a sandwich on a baguette.

Watch: “Mulan,” now streaming on Disney+, features a cameo appearance by Ming-Na Wen, the actress who originally voiced Mulan in the 1998 animated version.

Do: The ground beneath your feet may feel as if it’s constantly shifting, and planning can seem futile. Here are a few tips on how to cope, when everything keeps changing.

There’s plenty to read, cook, watch and do without stepping outside your front door. At Home has our full collection of ideas.

Jeffrey Gettleman, our South Asia bureau chief, has been reporting on the economic downturn in India stemming from the country’s lockdown and virus outbreak. Melina Dulkic, who writes the Asia briefing, talked to him about what went wrong and the path forward.

India’s economy was thought to be on track to rival China’s, but their paths have diverged widely this year in the pandemic. What happened?

In March, the prime minister imposed a very strict lockdown on the entire economy — no offices, no schools, no businesses, no transportation, no movement — and he gave people only four hours’ notice. People felt totally ambushed and didn’t have provisions in place. Millions of people lost their jobs.

While that was happening, there was a huge fissure in Indian society between people who had resources who were able to sustain this lockdown and people who couldn’t. During the two-month lockdown, tens of millions of migrant workers walked back or took trucks, basically poured out of the urban areas of India. That made the economic distress even worse. When the lockdown was lifted, there was a lot of labor missing. It also spread the coronavirus, because the virus was the most intense in crowded urban areas, and these people then were carriers and they brought the virus from the cities into every corner of the country.

India’s economy has taken a bigger hit than any other economy in the world because its labor was more disrupted. The Chinese never did a national lockdown. They locked down parts of Wuhan Province and other places at different points. But they never imposed a paralyzing of the national economy. So when the lockdown was lifted, the economy did not just bounce back.

How permanent is this?

We don’t know. The Indian economy is definitely doing better. There’s traffic in the streets, shopping being done at the malls. Many offices are open or partially open. There’s much more economic activity than there was during the lockdown. But there are still many people who are separated from their jobs and don’t want to come back. There are others who have gone hundreds of miles away and are having trouble coming back.

Thanks for joining me for today’s briefing. See you next time.

P.S.
• The Daily is off for the U.S. Labor Day holiday. Listen to our latest Book Review podcast, featuring Jeffrey Toobin on writing about President Trump.
• Here’s our Mini Crossword, and a clue: “Like a fox or ox, but not rocks or clocks” (five letters). You can find all our puzzles here.
• The word “medjoul” appeared for the first time in The Times yesterday, as noted by the Twitter bot @NYT_first_said.
• Jonathan Abrams, most recently at Bleacher Report’s magazine, is rejoining the Sports desk as a general assignment reporter.

Opinion | How Can We Bear This Much Loss?

Opinion | Are We Testing Coronavirus Vaccines the Right Way?