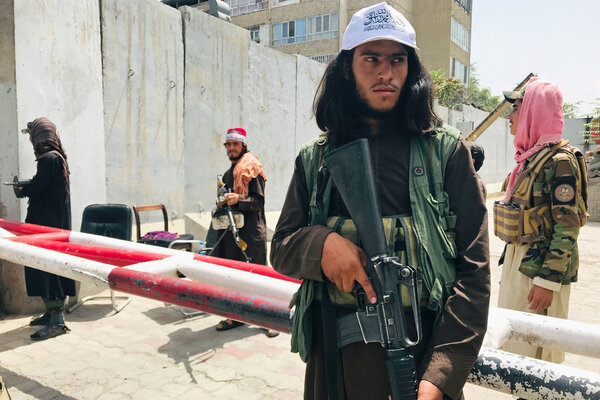 The Taliban seek to reassure the world

Taliban leaders took to Twitter, appeared on international cable networks and held a news conference to provide assurances that they would not carry out reprisal killings or seize property, following their takeover in Afghanistan. At their first news conference, a spokesperson said they would allow women to work and study — but “within the bounds of Islamic law.”

Still, the Taliban’s record raises worries of a violent and repressive future. Here are the latest updates and scenes from Kabul.

Afghan women remained cloistered at home in Kabul, fearful for their lives and for their futures. When the Taliban were in power from 1996 to 2001, they barred women and girls from taking most jobs or going to school.

In Washington, the Pentagon said that evacuation operations at the airport in Kabul were accelerating, with additional U.S. troops sent in and hundreds of passengers flying out.

India, Canada and Britain were increasing aid or expanding refugee permissions. Sweden said it would divert aid from Afghanistan so that it would not contribute to Taliban rule.

What happened? President Biden’s administration has seemed ill-prepared to deal with the Taliban’s final push into Kabul. Yet intelligence assessments back in July warned of a Taliban takeover even as Biden and his advisers said publicly that was unlikely to happen as quickly, according to current and former government officials.

Who are the Taliban? Here is a look at the origin of the insurgent group and how they managed to take over Afghanistan not once, but twice. There are worries that the country will again become a breeding ground for Islamist radicalism and terrorism, aided by new technologies and social media.

Analysis: With the Taliban retaking control of the country that served as the base for the Sept. 11 attacks, a full-circle debacle for the U.S. will engrave Afghanistan painfully in the national memory, writes Roger Cohen, our Paris bureau chief.

From Opinion: Malala Yousafzai, who survived a Taliban assassination attempt in Pakistan after speaking out about her right to go to school, writes, “Like many women, I fear for my Afghan sisters.”

President Biden’s administration has decided that most Americans should get a third shot of the Covid-19 vaccine eight months after receiving their second dose.

The rollout, which could begin as soon as mid-September, would first target people with immunodeficiencies and older populations. Officials are expected to reveal more details this week. Canada, Israel, Germany and France have similar programs.

Health workers hope the boosters will help ease the strain on their overwhelmed Covid wards — one in five I.C.U.s in the U.S. has nearly every bed occupied.

But the move also underscores the inequality in the global vaccination drive. Many countries have been able to fully vaccinate only a small portion of their populations, and they are scrambling to get the supplies to inoculate widely. The boosters take away from that supply.

Police in Thailand used a water cannon to break up protests at the national Police Headquarters a day after a young protester was shot in his head and left in a coma.

On the second day of an appeal by the former Khmer Rouge leader Khieu Samphan to overturn genocide charges, his defense team called into question evidence presented at his original trial.

Heavy rains from Tropical Storm Grace threatened to unleash mudslides and flooding in Haiti that could hamper recovery efforts from a major earthquake that struck on Saturday.

Amazon has eclipsed Walmart to become the world’s largest retail seller outside China, according to corporate and industry data.

The heirs of Edvard Eriksen, the artist who created the “Little Mermaid” statue in Copenhagen, are taking a Danish city to court over a similar statue. The Eriksen estate has a long history of going after people using the statue’s likeness.

Maki Kaji, the “Godfather of Sudoku,” died at his home in Tokyo. A university dropout, he turned a numbers game into one of the world’s most popular logic puzzles.

Last week, videos about sorority recruitment at the University of Alabama were all over TikTok under the hashtag #bamarush. Many featured women in the middle of the process, also called “rushing,” as they documented their outfits. TikTok’s algorithm turned the videos into a phenomenon, inspiring parodies and a fandom. So far, the hashtag #bamarush has more than 260 million views.

As Kalhan Rosenblatt wrote for NBC News, rush videos have done well before on social media platforms like YouTube. But the For You page, in which TikTok determines which videos users see next, introduced the genre to an audience that hadn’t engaged with college Greek life before.

What’s so transfixing about the videos is that they immerse people in an experience that’s likely to be unfamiliar. “You can follow an account and basically watch your own reality show,” one TikTok user told NBC News. “Southern sororities are so niche and so particular to a specific area in America, everyone finds it fascinating.”

For more, Slate’s ICYMI podcast has an episode dedicated to the topic.

Kuku paka is a rich Kenyan dish of chicken in a spiced coconut sauce.

Fermented foods — like yogurt, kimchi and kombucha — can increase the diversity of your gut microbes and decrease inflammation.

Michael J. Fox reviews “I Live a Life Like Yours,” a memoir by a Norwegian professor on the challenges of living with disability.

The latest episode of “The Daily” is on U.S. miscalculations in Afghanistan.

Sanam Yar wrote the Arts and Ideas. You can reach Melina and the team at [email protected].