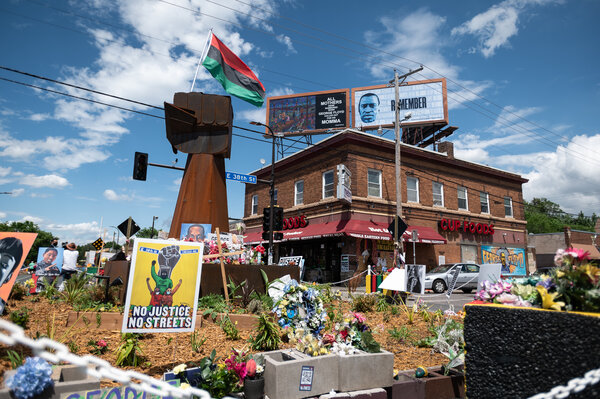 One year on from George Floyd’s death

Yesterday marked one year since George Floyd was killed during a police arrest after he went to buy cigarettes. What followed was an uprising for racial justice nearly unparalleled in American history.

Biden has promised Floyd’s family that he will win passage of a police reform bill in his name, but so far he has not made good on that promise.

At George Floyd Square in Minneapolis, people laid flowers. Marches, memorials and prayer gatherings were planned across the U.S. from morning to evening, stretching from Portland, Ore., to Louisville, Ky., to New York.

Changes: Over the past year, more than 30 states and dozens of large cities have created rules limiting the police’s use of force. We look at the shift in policing. Most Black Americans say that the police officer’s murder conviction does not increase their trust in the justice system, according to a recent poll.

Quotable: “Today is the day that set the world in a rage and people realized what’s going on in America and we all said, ‘Enough is enough,’” said Philonise Floyd, George Floyd’s brother.

The Belarusian activist who ‘refused to live in fear’

Roman Protasevich, the dissident from Belarus whose Ryanair flight was forced down over the weekend and who was snatched by Belarusian security officials on the tarmac of Minsk National Airport, had faced so many threats that “we all sort of got used to them,” a fellow exiled dissident recalled.

But the events on Sunday shattered that sense of security. Protasevich, 26, now faces the vengeance of President Aleksandr Lukashenko, the Belarusian leader he has defied with unflinching zeal since his teens.

Our reporters looked at his life in the opposition movement, as the authorities in Belarus released a video of his confession — made under duress, his friends say.

“By his character Roman has always been very resolute,” said one friend. “He refused to live in fear.”

The latest: Air France, KLM, Finnair, Lufthansa and Austrian Airlines joined the list of airlines that have stopped flying over Belarus.

Americans abroad whose passports expired during the pandemic may now return to the U.S. before renewing their travel documents, a shift of policy announced by the State Department on Monday.

The decision applies to Americans of any age who are outside the country and who hold passports that expired on or after Jan. 1, 2020, with the exception of babies born overseas who have not yet been issued a passport. Travelers leaving the country must still have current documents.

More than 100,000 Americans abroad are struggling to obtain consular appointments to renew their passports as many of those offices remain hobbled by Covid-19 restrictions and staffing reductions. Some are closed for all but emergency services.

All U.S. citizens returning to the country must still show proof of a negative Covid-19 test taken within 72 hours of departure.

Moderna said that its vaccine was effective for 12- to 17-year-olds and that it would seek authorization for its use from U.S. drug regulators.

India has reported nearly 27 million Covid cases and 307,231 deaths. A Times analysis of the true toll found a best-case estimate of 404.2 million cases and 600,000 deaths. A worst-case scenario puts deaths at 4.2 million.

American troops are set to be out of Afghanistan by early to mid-July, ahead of President Biden’s September deadline, after the Pentagon accelerated the withdrawal.

Prime Minister Benjamin Netanyahu warned that Israel would launch a “very powerful” response to any new attacks by Hamas militants. During a diplomatic visit, he thanked the U.S. for bolstering air defenses.

Biden and President Vladimir Putin of Russia will meet face to face for the first time in Geneva in June.

Military officials in Mali ousted the country’s interim civilian leaders on Tuesday, setting up a new crisis just nine months after the previous president was forced out in a military coup.

Prosecutors in Italy can try four Egyptian security agents on charges of kidnapping, torturing and murdering an Italian doctoral student in Cairo in 2016, a judge ruled on Tuesday.

Nadia Whittome, Britain’s youngest member of Parliament, said she would take several weeks off after a diagnosis of post-traumatic stress disorder, in a candid statement that has shined a spotlight on mental health issues.

A trove of extremely rare manuscripts from the Brontë family, held in a virtually untraceable private library and unseen for about a century, is set to go on auction at Sotheby’s.

Myanmar’s ruling military junta has killed at least four poets and imprisoned more than 30 others since the Feb. 1 coup. Poetry and dissent have long been intertwined in Myanmar, our correspondent writes.

For the first time in 17 years, billions of cicadas, part of a cohort called Brood X, are emerging from underground tunnels to sing, mate and die across the U.S.

A century ago, a prosperous Black neighborhood in Tulsa, Okla., perished at the hands of a violent white mob. In the Tulsa Race Massacre of 1921, a heavily armed white mob of looters and arsonists killed hundreds of residents, burned more than 1,250 homes and erased years of Black success.

We created a 3-D model of Greenwood, home to what was known as Black Wall Street, to show the types of people who made up the neighborhood and contributed to its vibrancy.

“If they had been allowed to carry on that legacy,” a granddaughter of a former resident said, “there’s no telling where we could be now.”

To help commemorate its 125th anniversary, The Times Book Review is highlighting some noteworthy first mentions of famous writers. You can find the full list here. Some of our favorites:

F. Scott Fitzgerald: In 1916, Princeton admitted only men, and they would often play women’s roles in campus plays. The Times featured a photo of Fitzgerald in character, calling him “the most beautiful showgirl.”

Patricia Highsmith: In 1939, the novelist appeared in an article about a “Greek Games” competition among students at Barnard: “A messenger, Joan Roth, rushed in to say that Persephone still lived and a rejoicing group danced in. Eight tumblers did tricks before the crowd to distract the still disconsolate Demeter.” Highsmith was among the student acrobats.

John Updike: An acclaimed short-story writer who had yet to publish a novel, Updike appeared in an advice article in 1958, encouraging parents to teach their children complex words. “A long correct word is exciting for a child,” he said. “Makes them laugh; my daughter never says ‘rhinoceros’ without laughing.”

This skillet dinner features chicken in a leek and farro pilaf. A springy salad makes a nice side.

In “A Ghost in the Throat,” the Irish poet Doireann Ni Ghriofa combines essay, biography and autofiction in writing about (and translating) a passionate 18th-century lament.

On her excellent debut album, “Sour,” the 18-year-old singer and actress Olivia Rodrigo expresses just how challenging it is to arrive at who you are, writes our critic.

Here’s today’s Mini Crossword, and a clue: Like champagne in a bucket (five letters).

That’s it for today’s briefing. See you tomorrow. — Natasha

P.S. Charanna Alexander has been named the next Weddings editor for The Times.

The latest episode of “The Daily” is about a major U.S. free-speech case that started with a cheerleader and a Snapchat post.

Sanam Yar wrote today’s Arts and Ideas. You can reach Natasha and the team at [email protected].