TORONTO — The snow was falling outside Ali Haberstroh’s apartment in late November when the idea came to her.

At the time, Canada was nearing a second lockdown to curb rising coronavirus cases. In anticipation, the owner of a vintage clothing store in Toronto who is a friend of Ms. Haberstroh’s had put together a list of other local vintage shops offering curbside pickup and deliveries in lieu of being able to open their doors.

“It was a wake-up call,” Ms. Haberstroh, 27, said of the list, which reminded her how enormous retailers like Walmart, Costco and Amazon had thrived during the pandemic while many smaller, local businesses had been shut. “I thought if there is one tiny thing I can do to help, then I should get on it.”

Inspired to build a more comprehensive list, Ms. Haberstroh promptly created an Instagram post, tagging independent businesses and shopkeepers across Toronto. Included was a new website, Not-Amazon.ca — a URL that she had bought for $2.99.

Introduced as a local list to help keep small businesses alive, Not Amazon was created “so you don’t have to give any money to Amazon this year!” the post read.

What began as a Google spreadsheet with more than 160 businesses collated initially from Ms. Haberstroh’s memory and research became a directory of hundreds that have a website and a high-quality photo and offer nationwide shipping, curbside pickup or delivery.

So far, the website has garnered more than half a million page views and grown to include 4,000 businesses across Toronto, Calgary, Halifax and Vancouver. The site is now submission-based, and thousands of businesses are awaiting Ms. Haberstroh’s approval.

“In a big city like Toronto, where it feels like most businesses are local, I think it’s so easy to think these things will be here forever,” said Ms. Haberstroh, who works as a social media manager at a marketing firm and plans to expand Not Amazon to even more cities. “You don’t think that they’re going to go anywhere.”

Small and medium-size businesses contribute more than 50 percent to Canada’s gross domestic product. But since the pandemic lockdowns, 40 percent of small businesses have reported layoffs while 20 percent have deferred rent payments, according to government data.

At the same time, Amazon and big-box retailers with more robust e-commerce platforms have far outpaced small competitors, turning online shopping from a convenience into a necessity for consumers worldwide.

Ms. Haberstroh’s attempt to even the playing field has been welcomed by small-business owners like Tannis and Mara Bundi, twin sisters who opened the Green Jar in Toronto last December. The store specializes in bulk items, like soap and honey, that customers buy to refill their own containers, reducing single-use plastics and household waste.

When the pandemic took hold in March, the sisters swiftly focused on their online operations and offered pickup and delivery, but even as restrictions eased, business remained touch and go. Since being on the Not Amazon site, the Green Jar has seen online orders rise 500 percent and has been “incredibly busy,” Tannis Bundi said. 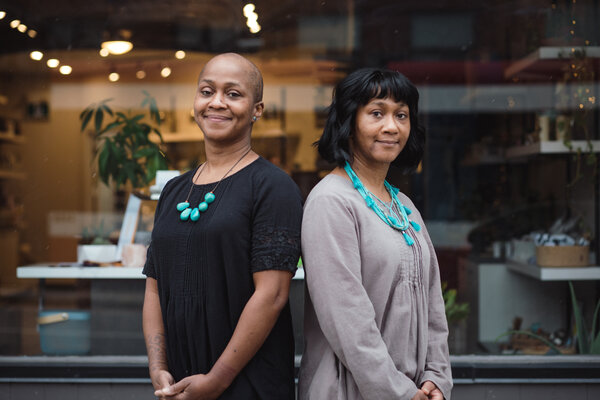 “This type of initiative really gave an opportunity for small businesses to be seen and appreciated,” she said. “Large corporations, like Amazon, they’re making millions and millions of dollars, and there’s a disconnect and a detachment. As a small business I have a much smaller carbon footprint, I have a vested interest in my community, and I’m more likely to invest back into my community through charity and hiring locally.”

Local campaigns by independent sellers have also popped up in the United States, with bookstores in particular fearing that they won’t survive the pandemic. In France, there was a nationwide backlash against Amazon and other big retailers as “nonessential” businesses closed in November. In August, Canada’s competition watchdog started an investigation into the company’s business practices.

While there have been some shifts in consumer behavior, Daniel Kelly, president and chief executive officer of the Canadian Federation of Independent Business, estimated that one in seven Canadian businesses, or 225,000, will close because of the pandemic.

“While I’m thrilled the movement is there, it’s competing against a pretty significant crosswind, and that is the business restrictions pushing newer customers into big-box and Amazon,” Mr. Kelly said. “I think coming out of this, the ‘buy local’ initiatives will have stemmed some of the losses, but it will sadly not be enough to help most small retailers survive.”

Not all is grim. One Toronto business, Stainsby Studios, was astonished by the threefold increase in pottery sales after being featured on Not Amazon. Another, Glad Day Bookshop, offering a variety of L.G.B.T.Q. titles, said the initiative had increased holiday sales 30 percent.

Like many other store owners, Mary Oliveira was scared when the country’s first lockdown took effect in March. But her five-year-old Toronto chocolate shop, Mary’s Brigadeiro, was fortunate to have an existing online presence that brought in steady income throughout the pandemic, she said.

In recent weeks, numerous new customers informed Ms. Oliveira that they had found her store through Not Amazon, which she had been added to but had never heard of.

“We noticed more people had the impetus to shop local,” said Ms. Oliveira, 30, who was surprised to find 27 percent of her online shoppers had come through Not Amazon. “With that, we sold out for the entire season a week ago. That’s never happened before.”

In November, she hired four more employees and now is considering opening other locations in Toronto. Ms. Oliveira, a native of Brazil, said the “buy local” initiative had brought a renewed sense of belonging, especially as she saw the numerous Amazon deliveries happening while local businesses struggled.

Ms. Oliveira said dealing with shipping delays as a small-business owner was frustrating while hearing customers say Amazon is much faster.

Her store’s success also coincided with more public awareness of and support for Black- and Indigenous-owned businesses, she said, after Black Lives Matter protests to address racism and police brutality in Canada this summer. Giving a boost to businesses with Black, Indigenous or queer owners is also one of the goals of Not Amazon.

“I think people realized that we are here as well, and we struggle with a bunch of things people don’t see,” said Ms. Oliveira, “being Black and being an immigrant in Canada.”