The private equity billionaire Stephen A. Schwarzman has spent many years financing educational programs, from his old high school to the Ivy League.

But the Blackstone chief executive’s largess hasn’t always bought good will: There was swift opposition to his proposal to put his name on Abington Senior High School in Pennsylvania, and his close ties to former President Donald J. Trump contributed to opposition to having his name on a campus center he funded at Yale.

And now, some participants in the Schwarzman Scholars program — a master’s course he established at Tsinghua University in Beijing to be a Chinese analogue to the Rhodes Scholarships — are speaking out against their benefactor.

They say Mr. Schwarzman is failing to live up to his own values and harming the program’s reputation by not cutting off money to lawmakers who opposed certifying President Biden’s electoral victory.

In a letter emailed to Mr. Schwarzman on Feb. 10, 161 current and past Schwarzman Scholars and two program professors urged Mr. Schwarzman to cut off those politicians and groups. “You espoused integrity, honesty and courage,” they wrote. “Now, we ask that you demonstrate those values by refusing to financially support those who would overturn the results of a free and fair election for their own political gain.”

About an hour later, Mr. Schwarzman — who with his wife was the third-largest donor to the objecting lawmakers, according to an analysis by the Center for Responsive Politics — refused.

Although the election certification vote would be “one of the major factors” in determining whom he supported in the future, Mr. Schwarzman wrote, “I value my constitutional right to carefully determine who I vote for and support.”

The rift centers on one of Mr. Schwarzman’s fondest achievements, a one-year graduate program started with a $100 million donation from him and augmented with $450 million he raised from others. Up to 200 students take part each year, living and learning in a building designed by Robert A.M. Stern Architects — called Schwarzman College — with coursework focused on Chinese history, leadership and global affairs. 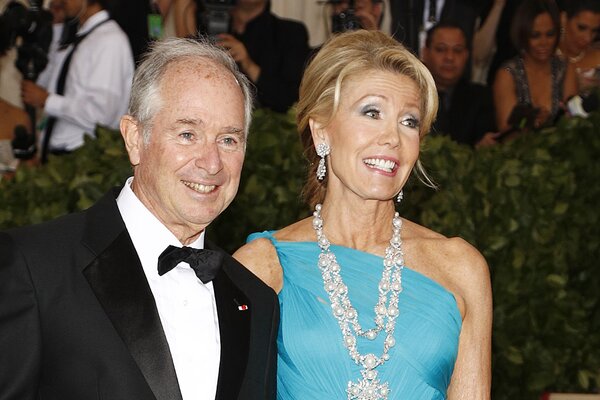 But some of the letter’s signers have begun to question whether having “Schwarzman Scholar” on their résumé is as much a risk as it is a benefit.

“I feel like I cannot in good conscience allow my name to be associated with someone who refuses to commit not to donate to such people,” said Alistair Kitchen, a program alumnus who helped organize support for the letter.

Mr. Kitchen, 29, an Australian who works in New York for Collective Impact, a strategy firm that focuses on progressive causes, said some scholars felt their association with the program could taint them, even as it burnished Mr. Schwarzman’s legacy, which Mr. Kitchen called a form a “reputation laundering.”

For Ashlie Koehn, who had worked her way through the University of Kansas and joined the Kansas Air National Guard before becoming a Schwarzman Scholar, the program was a revelation — the first time she’d been able to focus on academics and not cost. But she said Mr. Schwarzman seemed not to understand the extent of his influence.

“He has this self-perception of himself as an average American citizen, which he is in some ways,” said Ms. Koehn, 30, who works in state government. “But I think it disregards the fact that he has this outsized capital, and his donations give him an outsize impact.”

A quarter of the more than 600 students who have participated in the program since 2016 signed the letter, including 18 anonymously. Some scholars supported the letter, organizers said, but feared repercussions in their professional lives if they signed.

Others had different reasons for declining. Charles Vitry, a London-based alumnus of the program’s 2018 class, did not sign, although he said he “respected and appreciated the principles” of those who did. He said he also saw a need for “a broader community space to discuss challenging issues.”

A spokesman for Mr. Schwarzman noted that the program had started in 2013 — “long before the 2016 election” — and that Mr. Schwarzman had supported congressional Republicans across the board in 2019 at the recommendation of G.O.P. leader, Representative Kevin McCarthy of California. “The majority of candidates Steve donated to voted to certify the results — as Steve had repeatedly called for,” said the spokesman, Matt Anderson.

A spokeswoman for the Schwarzman Scholars program, Ellie Gottdenker, said in a statement that the program “remains true to its global mission and reputation as a world-class bridge for mutual understanding between China and the rest of the world.”

After Mr. Schwarzman donated $150 million to Yale, his alma mater, in 2015 to construct a building for events and informal gatherings to be named the Schwarzman Center, some professors and students complained about Blackstone’s business practices and his ties to Mr. Trump.

In 2018, he pledged $350 million to build a new computer science center at the Massachusetts Institute of Technology, also to be named after him, which drew opposition on similar grounds.

The same year, he pledged $25 million to help upgrade the high school he attended in suburban Philadelphia, which agreed to add his name to its own. The proposal set off an immediate backlash, and Mr. Schwarzman and the school quickly shifted course to name only a new science and technology building after him.

The friction with the Schwarzman Scholars started almost immediately after the program welcomed its first class in 2016.

Soon after the election, Mr. Schwarzman agreed to lead a business advisory council that made him one of Mr. Trump’s most prominent associates. After Mr. Trump introduced a travel and immigration prohibition aimed at people from predominantly Muslim countries, Mr. Schwarzman received sharp questions from the scholars on a video chat, according to one attendee. He argued that it was important to take a broad view and focus on common ground rather than on differences, the person recalled.

Then came the 2020 election, and Mr. Schwarzman’s reaction to the outcome felt like equivocation to some members of the program.

On a call with business leaders as votes in battleground states were still being counted, Mr. Schwarzman said he was sympathetic to voters who were skeptical of the counts. Later in the month, he said that the outcome was “very certain” and that Mr. Biden had his full support.

When rioters stormed the Capitol, Mr. Schwarzman condemned their actions as an “insurrection” and “an affront to the democratic values we hold dear” in a statement to Blackstone employees and Schwarzman Scholars.

But as a number of businesses and trade organizations were announcing that they would withdraw financial support from those who opposed certification of the election, at least two alumni wrote to Mr. Schwarzman raising concerns about his financial support of the objectors; they said he did not reply.

Frustrated scholars began discussing a group letter. Mr. Kitchen and his former classmate Ricky Altieri, a 28-year-old Yale law student, circulated drafts over WeChat, text and Signal and eventually settled on a five-paragraph note. It asked that Mr. Schwarzman commit never to donate to any politician or political group that “supported Mr. Trump’s bid to overturn the results of the 2020 U.S. presidential election.”

“We believe that donations to such candidates would violate the most basic principles of Schwarzman Scholars and harm its reputation,” the letter said.

In his reply, which immediately made its way among current and former scholars, Mr. Schwarzman pushed back, writing that he had publicly supported the certification of Mr. Biden’s victory. Although the large number of objectors left him disappointed and confused, he said, they were “acting legally under the Constitution.”

He added, “It is important in a democracy to continue to rely on our constitutional system and not voluntarily agree to be silenced.”

Some of the scholars seemed to agree — and cited the program’s influence as one reason.

Jacko Walz, 25, a New York-based strategy consultant focused on international development in Latin America, said the program had enhanced his awareness of the world around him and taught him about leadership and moral courage.

“I think those topics are really authentically taught there,” Mr. Walz said. “And now that I’ve graduated I hope to practice them all the time.”