HAMILTON, Ohio — Hamilton has long been a city in search of an identity.

During its heyday, its industries churned out paper, and it was home to a company that produced safes that could withstand a nuclear blast. But as demand for paper and bombproof safes declined, those industries took Hamilton down with them. What was left of this city of 70,000 along the Great Miami River was then gutted by the Great Recession a decade ago.

Over the years, leaders tried to reinvent the city, sometimes in ways that brought more ridicule than redemption.

Hamilton gained notoriety in the 1980s when the city officially added an exclamation point after its name (an addition promptly rejected by the mapmaker Rand McNally). Then the city christened itself the City of Sculpture, and it still boasts a highly regarded collection of sculptures and an award-winning sculpture park. Still, the artsy moniker could not break through the city’s Rust Belt image.

The city’s manufacturing ghosts continued to haunt it in the form of abandoned factories and smokestacks pointing like frozen fingers into the sky. Now, one of those shuttered factories is poised for repurposing, and locals doubt even the pandemic can derail Hamilton’s makeover, this time into a city of sports. 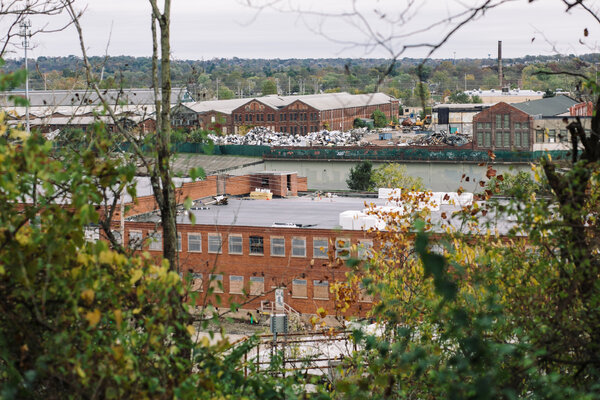 The city manager, Joshua A. Smith, arrived in 2010 from Howard, Wis., a bedroom suburb of Green Bay, another struggling Rust Belt city.

“The community lacked any kind of energy,” Mr. Smith, now 47, said. “It almost felt like the city had given up on itself.”

Perhaps no facility illustrated the city’s fortunes more than Champion Paper’s empty plant, which had closed in 2012. Some potential buyers began circling with offers (one out-of-town firm wanted to buy it for cold storage), but Mr. Smith saw promise, and the city bought the Champion complex along with its 40 acres of riverfront land for $400,000.

The 1.3-million-square-foot site is poised to become what is being billed as the largest indoor sports complex in North America: Spooky Nook Sports Champion Mill.

Spooky Nook is an indoor-sports company based in Manheim, Pa., where its 700,000-square-foot complex draws more than a million visitors a year, bringing in more than $50 million for the local economy, according to Tourism Economics, a travel analytics firm.

Hamilton, through tax breaks and infrastructure upgrades, has provided $20 million in funding for the $170 million Champion Mill complex in the hope that it will have the same draw when it opens in late 2021. To achieve that, the development will go beyond sports to include a fitness center, restaurants, residences and stores. The city estimates it will create 380 permanent jobs.

The shift to sports is a natural fit, said Mayor Pat Moeller, who added that he envisioned legions of tourists visiting Hamilton’s restaurants, bars and shops.

“It will transform us,” he said.

Around the country, youth sports have become big business, and cities often covet the facilities as a way to spur local development and lure out-of-towners.

The industry generates $19 billion in revenue nationally, up from about $9 billion several years ago, said Norm Gill, managing partner of Pinnacle Indoor Sports, a consulting service that has helped build 50 complexes across the country but is not involved in the Spooky Nook project.

“Sports tourism is on steroids,” said Mr. Gill, who estimated that each visitor might spend $110 to $180 a day on food, lodging and tickets.

More than $550 million has been spent developing complexes to host youth sports over the past three years, according to Sports Business Journal, a trade publication. And there are 1,250 indoor soccer facilities across the country, according to the U.S. Indoor Sports Association, a trade organization. They can range from less than 25,000 square feet to Champion Mill’s size, but only the largest attract major tournaments.

The SportsPlex in Cape Girardeau, Mo., for example, opened in May to great fanfare among residents. By offering six regulation basketball courts, two indoor soccer fields, 12 volleyball courts and other amenities, organizers hope to draw sporting and tournament business from a five-state region.

“These sports complexes are a symptom or the result of the professionalization of youth sports that has occurred over the last 40 years or so,” said Victor A. Matheson, a professor of sports economics at the College of the Holy Cross in Worcester, Mass. Elite traveling teams, increasingly expensive gear and more rigorous practice schedules are part of the experience for today’s players.

The pandemic has put the brakes on many industries, and youth sports is no different, but Mr. Gill thinks that by the time Spooky Nook Sports Champion Mill opens, the demand will be there. The industry is most likely oversaturated and headed for a reduction, he said, but the mixed-use component of Hamilton’s facility could give it staying power.

Industry experts agree that the key is drawing travelers who will circulate their dollars in the host city. Without that component, success can be fleeting.

Large youth sports complexes are typically 30,000 to 100,000 square feet, and many are privately run. Those owned by municipalities, like Cape Girardeau’s SportsPlex, are often built as a catalyst for development.

“Those facilities are loss leaders — the cities don’t make money from them,” Mr. Gill said. “The real goal is to bring hundreds of thousands of dollars in for the local economy.”

Spooky Nook Sports predicts a million visitors to Hamilton in the first year, a milestone that its facility in Manheim, near Lancaster, Pa., did not reach until its third year.

But the challenge for Hamilton and other cities is the finite supply of children and parents willing to spend many weekends of the year competing in these tournaments.

“You have to have gigantic tournaments to justify this size,” Professor Matheson said. “A town of 70,000 can’t generate business to keep 700,000 square feet of indoor athletic space occupied. You can shoot baskets in your driveway for free.”

To that end, Hamilton is trying to draw a critical mass of recreation-seekers to complement Spooky Nook. The Pinball Garage recently opened nearby, featuring more than 30 game machines, and Mr. Smith, the city manager, has stipulated that Spooky Nook fill the space for restaurants and other amenities with local operators.

“We believe our model, which focuses on local traffic and corporate events throughout the week and youth sports tournaments on weekends, is an excellent model,” he said in an email.

Local businesses are also hitching their fortunes to Spooky Nook. Hamilton straddles the Great Miami River, and up until a few years ago, the west side was pockmarked with empty storefronts. But once rumors of Spooky Nook’s arrival started circulating, boutiques, art stores and restaurants began moving in.

Mike Hoskins, the owner of Petals & Wicks, a flower and candle shop, said one of the things that had lured his wife and him to their current location four years ago was the expectation of increased traffic from the sports complex. They struggled during the pandemic lockdowns but have regained their footing and are banking on Spooky Nook’s changing the city, he said.

So is Paula Hollstegge, a co-owner of Hip Boutique, where the racks are full of colorful clothes and accessories, less than a mile from the sports complex.

“We are superexcited about Spooky Nook,” Ms. Hollstegge said. “We are hoping after a day of sports the women will want to leave the dudes behind and do some shopping.”

The city’s fortunes may well depend on that.