NEW YORK (Reuters) – Asian stocks look set to bounce on Friday to recover towards a one-month high as investors, following Wall Street’s lead overnight, sought silver linings in a run of data that showed the world is in its worst recession in decades. 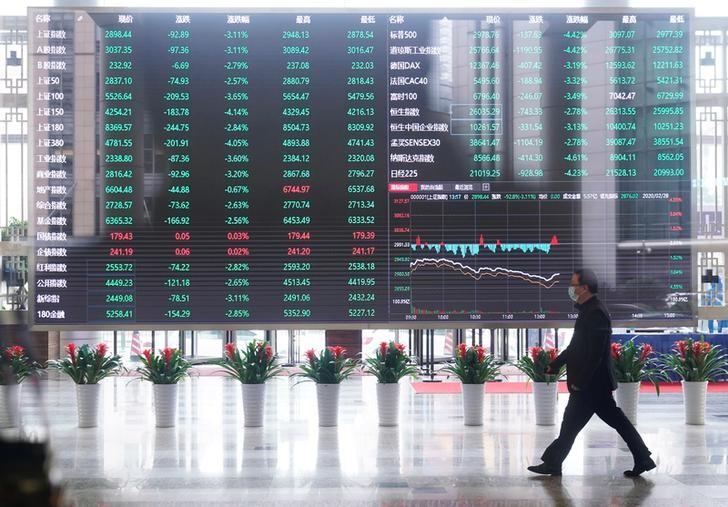 Any gains, however, may be capped in early trade as investors stay on the sidelines before a spate of Chinese data, due Friday, that will likely show the world’s No. 2 economy shrinking for the first time on record between January and March. A Reuters poll showed China’s economy is forecast to have shrunk 6.5% in the first quarter from a year ago.

E-Mini futures for the S&P 500 index ESc1 rose right from the closing bell and jumped 3.5% to a five-week high, while the Nikkei futures NKc1 pointed to gains of 545 points.

U.S. stock indices had eked out gains overnight in a session of choppy trade, after shares of Amazon.com Inc (AMZN.O) and Netflix Inc (NFLX.O) surged to record highs, as sweeping stay-home orders by governments to fight the coronavirus pandemic drove demand for online commerce and streaming services.

Shares of Gilead Sciences Inc (GILD.O) also soared 15% after a media report suggested that patients suffering severely from the coronavirus were responding positively to the drugmaker’s experimental treatment remdesivir.

Data released overnight had shown a record 22 million Americans filing for unemployment benefits over the past month, though some investors took heart in the fact that claims had fallen for the second straight week.

But in a sign some investors stayed averse to risk, the U.S. dollar rose again and U.S. Treasury yields slid to new lows.

Indeed, some analysts warned an economic recovery may be slow and protracted.

“Some believe when the crisis is over, everything will quickly return to what life was like in January, but I think there will be some lingering effects,” said Byron Wien, the vice chairman of private wealth solutions at asset manager Blackstone Group Inc.

“I think the recovery will look like a square root sign, a “V” at the beginning and then a gradual recovery.”

Joining a handful of other governments that are restarting their economies after mass shutdowns to contain the pandemic, U.S. President Donald Trump said on Thursday U.S. state governors can re-open businesses in a staggered, three-stage process.

Bond investors agreed the outlook was glum and bought more U.S. Treasuries, further flattening the curve. U.S. 10-year and 30-year yields dropped to two-week lows, while the yield on two-year notes US2YT=RR sank to a three-year trough of 0.187%. It recovered to 0.211% by early Friday, but was still over a 100 basis points below January levels.

Oil prices steadied a touch after hovering at an 18-year low overnight on fears that energy demand will collapse on the back of a global recession. U.S. crude CLc1 edged up 0.65% to $20, while Brent crude LCOc1 was flat at $27.82.