Early in college, Ou Jiayong had already learned two things. One, textbooks can be wrong. And two, it can be hard to change them — especially on topics as sensitive in China as homosexuality.

In 2016, during her first year at South China Agricultural University in her hometown, Guangzhou, she stumbled across a psychology textbook that described being gay as a mental disorder.

As a lesbian, Ms. Ou felt that was unacceptable, but the complaints she made went nowhere.

So Ms. Ou, who also uses the name Xixi, brought a lawsuit demanding that the publisher remove the reference and publicly apologize. Her case has renewed the conversation about tolerance and human rights in a country where discrimination based on sexual orientation is rampant and where homosexuality has long been seen as incompatible with the traditional emphasis on marriage.

In a letter to the judge, Ms. Ou, now 23, recalled being “deeply stung” when she read the textbook. “It brought back memories of being laughed at by my classmates because of my homosexuality,” she wrote in the letter, which her lawyer read aloud in court this summer, three years after the suit was filed.

The judge was unswayed. Last month, the court in Jiangsu Province in eastern China ruled in favor of the publisher, Jinan University Press, saying the content did not “contain factual errors.”

Ms. Ou’s case stunned many people who had no idea that some textbooks still classified homosexuality as a disease, said Peng Yanzi, director of L.G.B.T. Rights Advocacy China, an influential group that has led many awareness-raising campaigns. Citing a survey that a research group conducted in 2016 and 2017, out of the 91 psychology textbooks used in Chinese universities, almost half of them said that homosexuality was a type of disease. Several have been amended, Mr. Peng said, but “many more” remain. 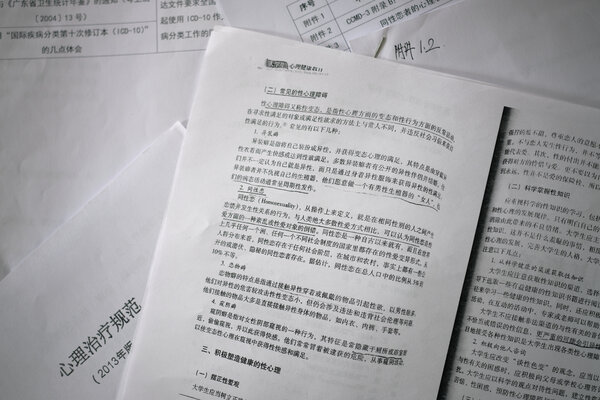 A hashtag about Ms. Ou’s case on Weibo, a popular social media platform, generated 26.7 million views, and several Chinese newspapers covered the hearing in July. Three weeks after the verdict, a school in Jiangsu said it would amend a health education manual after an internet user highlighted a phrase in it that said: “Homosexuality goes against the laws of nature.”

“Many admire her for doing this for three years, in particular gay people, who are encouraged by this kind of bravery,” he said.

In recent years, L.G.B.T. communities have been asserting their rights more forcefully, suing “gay conversion” clinics, employers and even the government. This year, as China prepared to adopt its first civil code, activists led an unsuccessful push for the legalization of same-sex marriage, flooding legislators with more than 230,000 online suggestions and letters.

Even though China decriminalized homosexuality in 1997 and removed it from an official list of psychiatric disorders in 2001, discrimination persists in employment, health care and other areas. Many people, including Ms. Ou, are not open with their families about being gay.

Darius Longarino, a research scholar in law at Yale Law School who has managed legal reform programs promoting L.G.B.T. rights in China, said Ms. Ou’s case had brought “a rights issue into a scientific and technical terrain where the evidence is all on your side.”

L.G.B.T. communities have tried that approach in the past. In 2015, a student sued the Ministry of Education over textbooks that describe homosexuality as an affliction, arguing that the government was responsible for ensuring the books’ quality and should disclose its approval process; she lost two years later. In 2014, a Chinese court ordered a clinic to compensate a man who underwent electroshock therapy designed to “cure” homosexuality, saying the clinic had committed consumer fraud.

But suing for discrimination is harder because Chinese law does not protect people based on their sexual identity. Like the case against the clinic, Ms. Ou’s lawsuit was couched as a violation of consumer rights, with her lawyers arguing that there were dozens of typos and other errors in the 2013 edition of “Mental Health Education for College Students,” a widely used textbook.

The most egregious error, they said, was this phrase: “Compared with the sexual orientation of most people, homosexuality can be seen as a mental disorder or a confusion of sexual desires.” Since homosexuality is no longer on China’s official list of psychiatric disorders, the phrase is factually incorrect and the publisher should be held liable, said Leon Ge, Ms. Ou’s lawyer.

As the case encountered repeated delays, Ms. Ou completed her degree in sociology in mainland China and moved to the semiautonomous territory of Hong Kong, where she now works for a labor rights organization.

“We used a very difficult method to sue, and after three years, we are still insisting that they correct the error,” Mr. Ge said. “That, in itself, is symbolic.”

Ms. Ou’s activism began in college, when she took courses on gender equality and joined an L.G.B.T. student group at another school.

She described the humiliation she felt her freshman year when she participated in a debate about whether a gay couple could form a family. One classmate cited a psychology textbook to argue against same-sex marriage. Another asked Ms. Ou how she would feel if she were surrounded by gay people.

“I’m gay,” Ms. Ou said, as the classroom erupted in laughter. She recalled that a male classmate responded, “Whatever you say about your own life is meaningless, the textbook is right!”

In May 2016, after Ms. Ou discovered the offending phrase in the textbook, she sent an email to the publisher but received no reply. She turned up at the publisher’s office with a letter signed by 300 people asking for the textbook to be revised. An employee accepted her letter, but no one followed up. She then contacted the provincial Press and Publication Bureau, which responded by saying that the content had no “factual or logical mistakes.”

She took the publisher to court the next year, driven by her classmates’ derogatory comments as well as the suicide of a gay student at a Guangzhou university in 2015.

When the hearing was finally scheduled for this summer, Ms. Ou could not return to the mainland in time because of pandemic restrictions. So she stayed up through the night writing two letters to the judge, including one that she asked to be read out in court.

In it, Ms. Ou argued that the judge and the publisher must have had their own experiences being ridiculed over personal qualities beyond their control.

“I believe you can empathize with the daily injustices that minority students face on campus: being isolated, cursed, beaten and even sexually assaulted,” she wrote. “We should not tolerate discrimination. We have to change.”

Ms. Ou said she was appealing the judge’s ruling against her, comparing the fight to her hobby of hiking.

“How can you just quit? You can only continue walking,” she said. “This is a path with no return.”