Home » Business » Coronavirus: A visual guide to the economic impact

The coronavirus pandemic, which was first detected in China, has infected people in 188 countries.

Its spread has left businesses around the world counting costs and wondering what recovery could look like.

Here is a selection of charts and maps to help you understand the economic impact of the virus so far.

Big shifts in stock markets, where shares in companies are bought and sold, can affect the value of pensions or individual savings accounts (ISAs).

The FTSE, Dow Jones Industrial Average and the Nikkei all saw huge falls as the number of Covid-19 cases grew.

The Dow and the FTSE saw their biggest quarterly drops in the first three months of the year since 1987. 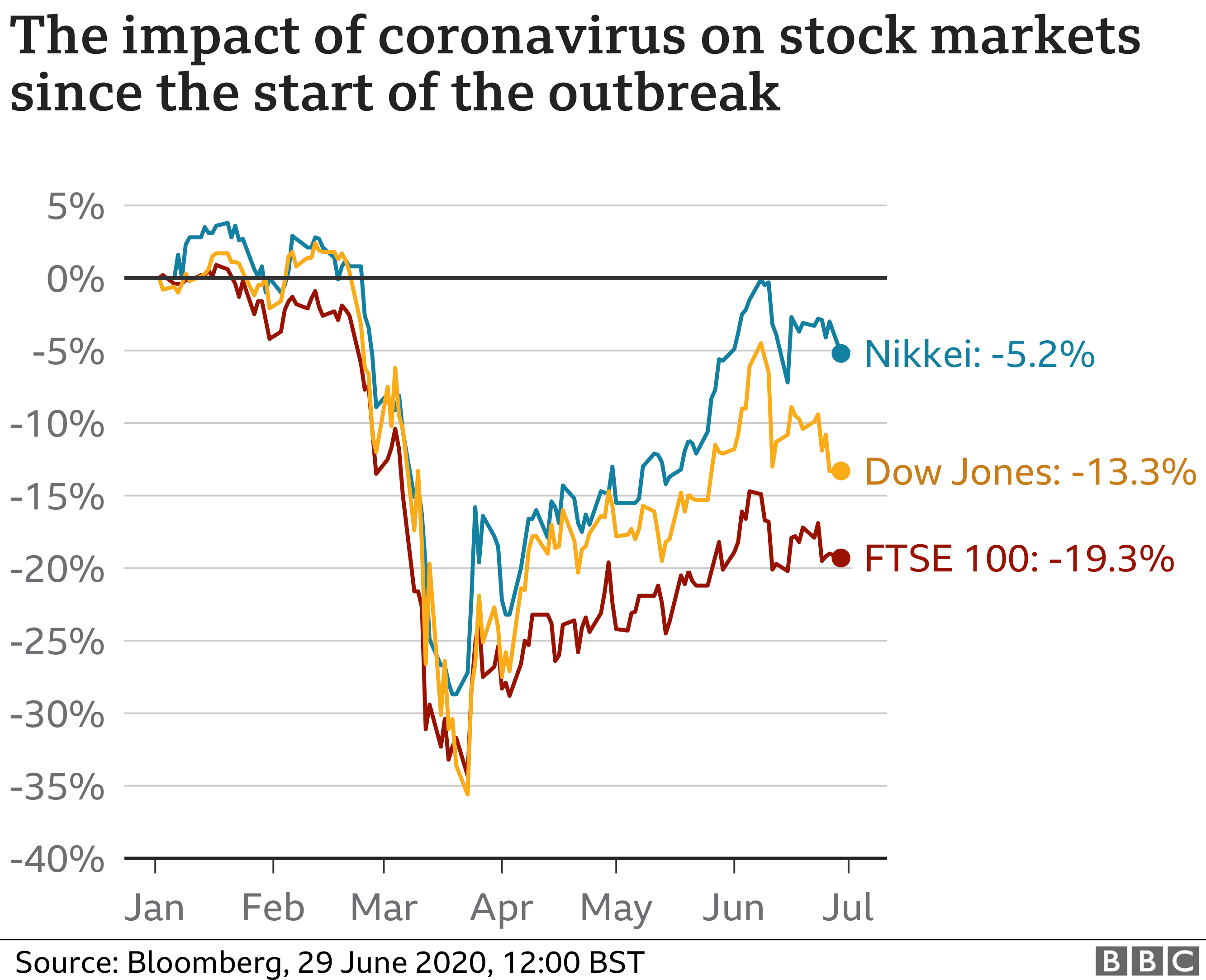 In response, central banks in many countries, including the UK, slashed interest rates. That should, in theory, make borrowing cheaper and encourage spending to boost the economy.

Global markets have since recovered some ground as governments have intervened. But some analysts have warned that they could be volatile until fears of a second wave of the pandemic are eased.

Many people have lost their jobs or seen their incomes cut due to the coronavirus crisis.

Unemployment rates have increased across major economies as a result.

In the United States, the proportion of people out of work has hit 10.4%, according to the International Monetary Fund (IMF), signalling an end to a decade of expansion for one of the world’s largest economies.

Millions of workers have also been put on government-supported job retention schemes as parts of the economy, such as tourism or hospitality, came to a standstill under lockdown.

However, the data differs between countries. France, Germany and Italy provide figures on applications, for example, whereas the UK counts workers currently enrolled in the scheme.

But there have since been some signs of recovery in the global jobs market.

China and France, for example, have seen increases in hiring rates as shutdowns eased, according to networking platform LinkedIn.

Some experts have warned, however, it could be years before levels of employment return to those seen before the pandemic.

If the economy is growing, that generally means more wealth and more new jobs.

It’s measured by looking at the percentage change in gross domestic product, or the value of goods and services produced, typically over three months or a year.

But the IMF says that the global economy will shrink by 3% this year. It described the decline as the worst since the Great Depression of the 1930s.

Although it said that the coronavirus has plunged the world into a “crisis like no other”, it does expect global growth to rise to 5.8% next year if the pandemic fades in the second half of 2020.

That’s driven primarily by growth in countries such as India and China.

Recovery in big, services-reliant, economies that have been hit hard by the outbreak, such as the UK or Italy, is expected to be a slow process.

The travel industry has been badly damaged, with airlines cutting flights and customers cancelling business trips and holidays.

Many countries introduced travel restrictions to try to contain the virus.

Data from the flight tracking service Flight Radar 24 shows that the number of flights globally took a huge hit in 2020.

But as the spread of infections has eased in some areas, the industry has started to open back up.

Spain, for example, has reopened its borders to visitors from most of Europe without having to quarantine. For months it was under one of Europe’s toughest lockdowns.

Travel companies also said that bookings from the UK had “exploded” after the government announced current restrictions will be eased.

Demand for oil all but dried up as lockdowns across the world kept people inside.

The crude oil price had already been affected by a row between Opec, the group of oil producers, and Russia. Coronavirus drove the price down further.

Brent crude is the benchmark used by Europe and the rest of the world. Its price dipped below $20, to the lowest level seen in 18 years.

Prices have recently regained ground as travel restrictions in some countries have been relaxed, boosting demand for fuel.

Retail footfall also saw unprecedented lows as shoppers stayed at home in a bid to stop the spread of Covid-19.

Pedestrian numbers have since risen as lockdown measures have been rolled back, according to research firm ShopperTrak,

Separate research suggests that consumers might still be feeling anxious about their return to stores.

More than half of UK customers expect they will now go shopping less often over the next one or two years, according to a survey of more than 1,000 people by accountancy giant EY.

Governments around the world have pledged billions of dollars for a Covid-19 vaccine and treatment options.

A number of pharmaceutical firms are in a race to develop and test potential drugs that could help nations get back to “normal”.

Shares in some companies have shot up on the hopes that some will be approved and distributed at scale.

AstraZeneca’s share price, for example, has hit record highs. The Drug company says it will be able to produce two billion doses of a vaccine.

“Until such medical interventions become available, no country is safe,” the IMF said of the pandemic that has disrupted the global economy.