WASHINGTON — Democrats on Tuesday took the first step to push through President Biden’s $1.9 trillion economic rescue plan, using a budgetary maneuver that could eventually allow the measure to become law without Republican support.

The move advanced the two-track strategy that Mr. Biden and Democratic leaders are employing to speed the aid package through Congress: show Republicans that they have the votes to pass an ambitious spending bill with only Democratic backing, but offer to negotiate some details in hopes of gaining Republican support.

“We are not going to dilute, dither or delay,” Senator Chuck Schumer, Democrat of New York and the majority leader, said on the Senate floor. “There’s nothing about the process itself that prevents bipartisanship.”

The party-line vote of 50 to 49 set the stage for Democrats to advance Mr. Biden’s plan through budget reconciliation, which would allow it to pass with a simple majority vote, bypassing the need for Republican support. (Senator Patrick J. Toomey, Republican of Pennsylvania, was absent and did not vote because he was delayed by snow.)

The vote came the day after 10 Republican senators met at the White House with Mr. Biden seeking a smaller, $618 billion package they said could win bipartisan backing.

On the call, Mr. Biden “spoke about the need for Congress to respond boldly and quickly,” Mr. Schumer said afterward. “He was very strong in emphasizing the need for a big bold package. He said he told Senate Republicans that the $600 billion that they propose was way too small.”

While Mr. Biden said he told Republicans he was willing to make some modifications to his proposal, he and Ms. Yellen told the group that if the Senate embraced the Republican plan, “we’d be mired in the Covid crisis for years,” according to Mr. Schumer.

Senate Democrats could approve the budget resolution as soon as Friday. On Tuesday, a key Democratic senator announced he would support it: Joe Manchin III of West Virginia, who is a crucial swing vote, said he would agree to move forward with the budget process “because we must address the urgency of the Covid-19 crisis.”

“But let me be clear — and these are words I shared with President Biden — our focus must be targeted on the Covid-19 crisis and Americans who have been most impacted by this pandemic,” Mr. Manchin said in a statement, signaling he might still vote against aspects of Mr. Biden’s plan that he opposes. “I will only support proposals that will get us through and end the pain of this pandemic.”

Mr. Manchin also reiterated his opposition to Mr. Biden’s proposal to raise the federal minimum wage to $15 an hour, which could force Democrats to drop it from their legislative package.

The budget resolution would instruct congressional committees to draft legislation that could include Mr. Biden’s stimulus proposal, which includes $1,400 direct payments for many Americans, funding for vaccine distribution, reopening schools and other measures. The committees would work on finishing the plan at the same time as the Senate is scheduled to hold an impeachment trial of former President Donald J. Trump on charges he incited the Jan. 6 assault on the Capitol.

Its introduction met with resistance from Republicans who discussed the proposal with Mr. Biden on Monday evening at the White House and warned against pursuing it through reconciliation. Many of those senators voted for the 2017 tax cut legislation that Republican leaders passed via reconciliation without a single Democratic vote.

Some Republican senators considered Mr. Biden receptive to their proposals, but said his chief of staff, Ron Klain, shook his head dismissively during the Republicans’ presentation, according to a participant in the meeting.

“It’s not a good signal that he’s adopting a take-it-or-leave-it approach right after his president delivers an inaugural address based on unity,” said Senator Todd Young, Republican of Indiana.

Senator Mitch McConnell, Republican of Kentucky and the minority leader, who employed reconciliation for both tax cuts and a failed attempt to repeal the Affordable Care Act under Mr. Trump, said the group of 10 Republicans who met with the president left the White House believing Mr. Biden was more interested in compromise than his staff or Mr. Schumer was. 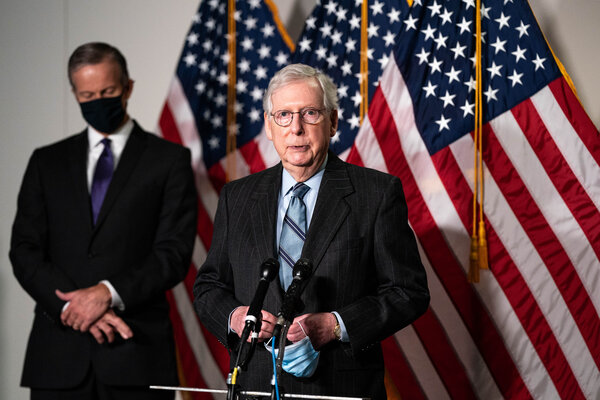 Lawmakers have begun pushing for changes to the Biden plan, including Democrats who on Tuesday pushed for its cost to be offset in part by repealing a business tax break that Congress approved last year.

More than 100 lawmakers, led by Representative Lloyd Doggett of Texas and Senator Sheldon Whitehouse of Rhode Island, say the move — and a related change that would effectively raise taxes on some businesses in the years to come — could reduce federal borrowing for the aid package by as much as $250 billion.

“The best place to start for Republicans urging more narrowly-targeted relief is eliminating the $250 billion bonanza for hedge fund managers and real estate speculators they previously tucked into the CARES Act,” Mr. Doggett and Mr. Whitehouse said in a written statement.

The tax cuts in question — which center on so-called net operating losses — were included in a rescue bill Congress passed in March, as the pandemic spread and the nation was in the middle of a recession. They were temporary rollbacks of a limitation placed on business deductions by the 2017 tax law that Republicans passed and Mr. Trump signed. In effect, the March provision allowed some companies that suffered large losses in recent years to reduce their tax bills to the federal government, by applying those losses to offset taxes on profits from the previous five years.

Proponents of those tax breaks — including congressional Republicans and business groups — said the move would provide a cash infusion to companies struggling amid the pandemic.

The Democratic lawmakers on Tuesday proposed repealing the change, which applied to losses incurred from 2018 to 2020, and making permanent the Trump-era limitation on the carrying back of net operating losses.

Mr. Biden also faced pressure to trim his spending plans and compromise with Republicans on Tuesday from an influential business group that had welcomed his initial proposal.

In a four-page letter to Mr. Biden and congressional leaders, the U.S. Chamber of Commerce said lawmakers should prioritize money for vaccine distribution, school reopening and child care facilities in their economic aid package. It asked them to tie additional months of assistance for the long-term unemployed to economic conditions in states, cutting off aid when the economy improves, and to provide less aid to unemployed workers than Mr. Biden has proposed.

The chamber also pushed Mr. Biden to reduce the number of Americans eligible to receive direct payments, citing statistics showing a majority of households earning more than $50,000 a year have not lost income in the pandemic.

But Jen Psaki, the White House press secretary, told reporters on Tuesday that Mr. Biden wished to send payments to a large group of families, including some with six-figure incomes. She cited a hypothetical couple in Scranton, earning $120,000 a year, and said Mr. Biden believed “they should get a check.”