SHANGHAI — The business of making cars has reached a critical juncture — and it looks as if China is in the driver’s seat.

General Motors’s surprise announcement on Thursday that it aspires to eliminate gasoline and diesel cars from its fleet by 2035 and embrace electric cars follows a road map successfully drawn by Beijing. To get there, G.M., the Detroit stalwart and symbol of American industrial might, may have no choice but to embrace car and battery technologies in which Chinese companies play leading roles.

Even when setting the time frame, G.M. seems to be matching Beijing’s speed. Just three months ago, Chinese policymakers ordered that most vehicles sold in China must be electric by 2035.

“When it comes to global automakers’ electric vehicle plans, all roads lead back to Beijing,” said Michael Dunne, a former president of G.M.’s Indonesia operations.

Precisely how G.M. will shift its industrial capacity isn’t entirely clear, and the company declined on Friday to comment on what influence Beijing’s policies may have had in its planning. It didn’t mention China in its announcement on Thursday.

It didn’t have to. China has the market clout and the steadiness of regulatory policy to influence automotive decisions made from Detroit to Tokyo to Wolfsburg, Germany.

China already is by far the world’s largest car market, accounting for a third of global sales. It is bigger than the American and Japanese auto markets combined. G.M. and Volkswagen now both sell more cars through joint ventures in China than in their home markets.

But China’s sway also extends to the business of making electric cars. Worried about its own pollution problems and keen to stay competitive in the technologies of the future, Beijing has long lavished subsidies on its electric car industry. During the global financial crisis a dozen years ago, China was already offering its taxi fleets and local government agencies up to $8,800 per car to choose electric models.

Today, China is the leading maker of big battery packs for electric cars, producing considerably more than the rest of the world combined. Chinese regulations required until a year ago the use of Chinese battery suppliers, instead of their mostly Japanese and South Korean rivals, for electric cars sold with Chinese subsidies. That forced multinationals to place huge orders with CATL, the main Chinese producer. 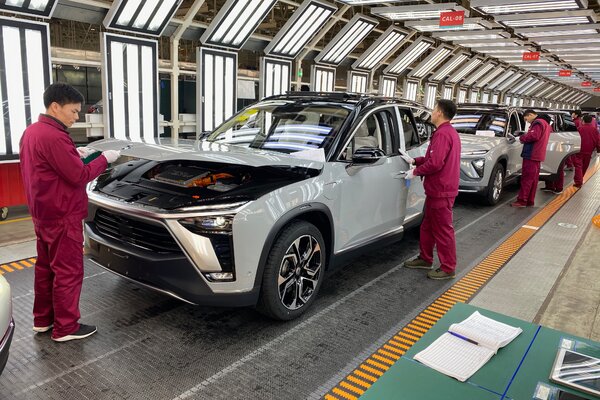 Major global automakers are already developing electric cars in China. Daimler and Toyota have jumped into extensive joint ventures with Chinese manufacturers to build electric cars. Ford Motor announced on Thursday that its new Ford Mustang Mach-E, the most head-turning car at the Beijing auto show last autumn, will be manufactured in China as well as Mexico.

So far, no Chinese company has produced an electric car that can rival Tesla in capturing the world’s imagination, although one, NIO, is trying. But China has completed many of the steps along that road. Notably, Tesla began making vehicles in a factory in Shanghai a year ago.

The world’s shift to electric cars, “is based on the Chinese technological road map,” said Yunshi Wang, the director of the China Center for Energy and Transportation at the University of California, Davis.

China is not trying to set global standards just for electric cars. It is also moving quickly to commercialize large numbers of self-driving cars, a technology developed in California. China is also trying to take the lead on how cars connect to the internet, through its planned nationwide deployment of 5G mobile communications.

Chinese government mandates require widespread installation of these technologies by 2025. That has pushed Chinese and Western companies alike to adapt.

“From this we can see, autonomous driving and intelligent connected vehicles are no longer a mere vision, they are a close reality,” Stephan Wöllenstein, the chief executive of Volkswagen China, said last week.

China chose battery-powered electric cars. It announced in 2017 that it was phasing out fossil fuels for cars by a then-unspecified date. Many in the industry were skeptical.

Mary Barra, the chief executive of G.M., flew to Shanghai two weeks later and declared that while G.M. planned to put more electric cars on the road, the company believed that consumers, not governments, should decide when to stop buying gasoline- and diesel-powered models.

“I think it works best when, instead of mandating, customers are choosing the technology that meets their needs,” she said at the time.

China has taken a different approach. Given the cost and complexity of developing electric cars, the government has set big targets and offered the support to help its companies meet them.

When it comes to the car industry, “the most important thing is what the government does,” said Liu Jing, a professor at the Cheung Kong Graduate School of Business in Beijing.

Making the battery pack costs as little as $1,500 for the simplest Chinese-brand electric subcompacts, which are not really suitable for highway driving because of their slowness and modest range. But the cost is as much as $12,000 for a high-performance car, like a Tesla. Gasoline engines in each category of car size and performance typically cost less than half as much.

Yet battery costs around the world are tumbling by nearly one fifth each year. Chinese companies with lavish government backing have built immense battery factories deep in western China, notably in Qinghai Province, where much of the lithium for the batteries is mined. Mass production has yielded formidable economies of scale.

China is also the world’s main producer of electric motors and a wide range of other electronics.

China’s drive for dominance in electric cars began in 2007. That was when Wen Jiabao, then China’s premier, unexpectedly selected a former Audi engineer, Wan Gang, to become the minister of science and technology. Mr. Wan, who had also served as president and as director of the Center of Automotive Engineering at Tongji University in Shanghai, was a passionate advocate of electric cars. Mr. Wan had strong support from China’s military and intelligence community, which had long seen the country’s oil imports as a strategic vulnerability.

In 2008, Mr. Wan’s first full year in office, China manufactured only 2,100 electric cars. But production has soared since then, reaching 931,000 last year according to LMC Automotive, a London data firm.

China also got help from Western companies who were getting little support at home. G.M. agreed in 2011 to transfer battery technology and other electric car technology to a joint venture in China with the country’s largest state-owned automaker, Shanghai Automotive Industry Corporation.

G.M.’s 2011 announcement was made at a time when the Chinese government was putting heavy pressure on foreign automakers to transfer electric car technology to joint ventures in China. Such technology transfers — which foreign companies sometimes complain they are forced to make to gain access to the big Chinese market — have become a major issue between Washington and Beijing. The transfers were cited by officials under Donald J. Trump, the former president, as one reason for launching a trade war against China.

Now many Chinese companies are joining the electric car push. Zhejiang Geely, a Chinese carmaker, announced on Friday that it and Foxconn, the contract manufacturer of Apple iPhones and laptop computers in huge factories in China, were in talks to help Faraday Future in the United States make electric cars.

By this autumn, said Mr. Liu, of the Cheung Kong Graduate School of Business, “you’re going to see a flood of electric vehicles all over the place, going into the market.”