Home » Business » Google Is Suddenly Paying for News in Australia. What About Everywhere Else?

SYDNEY, Australia — Just a few weeks after Google threatened to leave Australia if the government forced tech platforms to pay for news, the search giant is suddenly showering money on its most demanding critics.

With groundbreaking legislation expected to pass this week or next, Google has sought to blunt the impact by striking deals of its own with media companies, including two in recent days worth tens of millions of dollars a year. Other agreements, including one with Rupert Murdoch’s News Corp., are expected to follow.

Media companies have complained for years that they are not fairly compensated for articles and other content that generate ad revenue for platforms like Google and Facebook, complaints that tech companies have largely ignored. Google’s rush to pay up in Australia shows how regulation in a relatively small country — or just the threat of it — can dramatically alter the behavior of a global tech behemoth that grew with impunity back home in the United States.

The question is how far other governments will go in compelling tech platforms to pay for news. A few officials in Canada and Europe have expressed some support for the approach, and a handful of countries are taking action on their own.

But in the United States, journalism seems to have fewer friends in the halls of power. There, regulatory momentum has been moving in other directions, focused on potential antitrust cases or legislation that would hold companies accountable for what gets posted on their platforms.

“The Australian regulatory experiment is highly interesting,” said Daniel Gervais, a former legal officer at the World Trade Organization who now teaches at Vanderbilt Law School in Tennessee. “If it succeeds, I think it will be followed by several other countries, but I doubt that the U.S. will be at the top of that list.”

Even those who support Australia’s proposal admit that it has grown out of an unusual dynamic. Australia has a long history of market intervention, from high wages to strict gun laws, and soft protectionism for favored companies like the country’s four major banks.

It also has one of the most concentrated media industries in the world, dominated by News Corp. And many of the most powerful media figures, including Mr. Murdoch, are closely aligned with the conservative politicians who run the country. 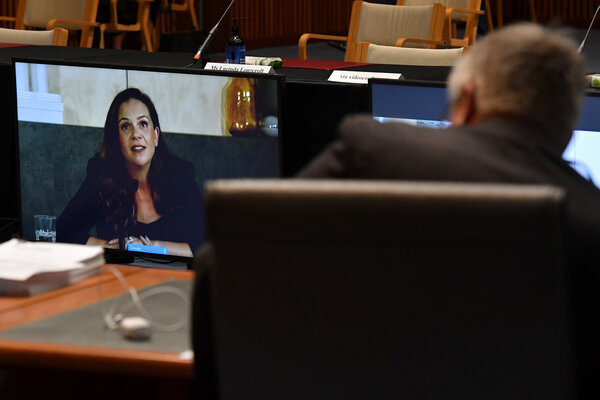 News Corp. has been pushing for compensation from tech platforms for years, while also beating the drum for Prime Minister Scott Morrison ever since he took over in 2018 in an intraparty coup fueled by coverage in the company’s newspapers and on its television stations.

Josh Frydenberg, who as federal treasurer would have enormous discretion over the new legislation, has media ties of his own. In 2016, he was the best man at the wedding of Ryan Stokes, the son of Kerry Stokes, the billionaire owner of Seven West Media, one of the companies that have reached a deal with Google.

In short, it’s no surprise that the Australian government sees America’s tech companies, which have done themselves no favors by trying to sidestep local taxes, as less worthy of support than the dominant national media.

“We’ve got this peculiar symbiotic thing between the news business and the government of the day,” said Jim Minifie, an economist with Lateral Economics, a consulting firm that specializes in digital public policy. “There is a more natural alliance between the center-right government and the news that influences things.”

The legislation being considered includes a code of conduct that would allow media companies to bargain individually or collectively with digital platforms over the value of their news content. The code is intended to address “bargaining power imbalances” between the two sides, partly by forcing disputes into a final arbitration process. It would apply at first only to Facebook and Google, though other digital platforms could be added.

Inside Google’s Australia offices, nearly everything about the law inspires dismay; the process has often been described as a shakedown led by powerful insiders, as if Google were a vulnerable start-up. The frustration goes both ways, with some Australian politicians calling Google’s threat to leave the country little more than blackmail.

But Paul Fletcher, the communications minister, said the Sturm und Drang overlooked the fact that the process began more than three years ago. The proposed code, which was originally designed to be voluntary, has evolved to become mandatory and tougher, he said, because that is what is needed to make the giant platforms pay closer attention to the value of credible information from established outlets.

The code would apply only to media companies that register and are approved as legitimate, making the government a convener of commercial deals — a role it already plays with the electricity market and other industries that require incentives to cooperate.

“The overwhelming thrust of this has been to get the parties to the table and have commercial negotiations,” Mr. Fletcher said in an interview.

Google’s furious lobbying against the law has included not just threats to leave Australia but also extensive use of its own platform. On many days in recent months, major Australian news sites were buried in Google search results in what the company called an “experiment.”

All of it appears to have failed. The bill passed the House of Representatives on Wednesday night, and Mr. Fletcher said the government believed it had the votes it needed in the Senate.

With the writing on the wall, Google has suddenly become more amenable to compromise. The deals with the Australian media companies, while not fully public, appear to be similar in size to one that Google made last month in France, where a European copyright law has been used as a cudgel.

The payments could buy the company time, or even a reprieve. If enough deals are done, Mr. Frydenberg has said, he could exclude Google from the code at least for now, allowing it to achieve its top priority: retaining the power to decide how much information is worth.

“A crude analogy is that the treasurer has a gun with the name Google written on it, but has decided to keep it locked in his drawer for now,” said Tama Leaver, an internet studies professor at Curtin University in Perth.

Many argue that, even in a highly concentrated and mildly compromised media market, a serious threat was required.

“There is a sense of realpolitik for this, but the outcome is positive,” said Peter Lewis, director of the Center for Responsible Technology at the Australia Institute, an independent research group. “It’s a significant injection of money into a sector that has lost 5,000 jobs over a decade, and it’s only happening because of the threat of this legislation.”

It may also be the beginning of a broader reckoning. Facebook would still be subject to the code, other companies could also be designated, and the lengthy government report that led to the legislation also included recommendations for laws that give people more control over their personal data and do more to force platforms to manage misinformation.

“There’s a solid base of competition policy and analysis underpinning what we’re doing here,” Mr. Fletcher said. “There are a number of areas where Australia has sought to put in place regulatory frameworks in relation to the internet which are perhaps different to what is being done in other countries and in some ways ahead.”