Heathrow reported a loss of £1.5bn in the first nine months of the year – a year when demand for air travel was hit badly due to the coronavirus pandemic.

Passenger numbers between July and September were down by more than 84% compared with the same period in 2019, as the airport started to fall behind rivals that are using coronavirus testing regimes.

Heathrow saw 18.97 million passengers in the year to the end of September, compared to the 19.27 million at Paris Charles de Gaulle.

Both are followed closely by Amsterdam’s Schiphol (17.6 million) and Frankfurt in Germany (16.16 million).

Heathrow’s third-quarter revenue fell by 72% year on year to £239m, while earnings before tax and interest dropped to £37m.

Chief executive John Holland-Kaye has regularly pushed for passenger testing as a way to keep the aviation and travel industry going during the coronavirus pandemic.

He said: “Britain is falling behind because we’ve been too slow to embrace passenger testing.

“European leaders acted quicker and now their economies are reaping the benefits.

“Paris has overtaken Heathrow as Europe’s largest airport for the first time ever, and Frankfurt and Amsterdam are quickly gaining ground.

“Bringing in pre-departure COVID tests and partnering with our US allies to open a pilot air bridge to America will kick-start our economic recovery and put the UK back ahead of our European rivals.” 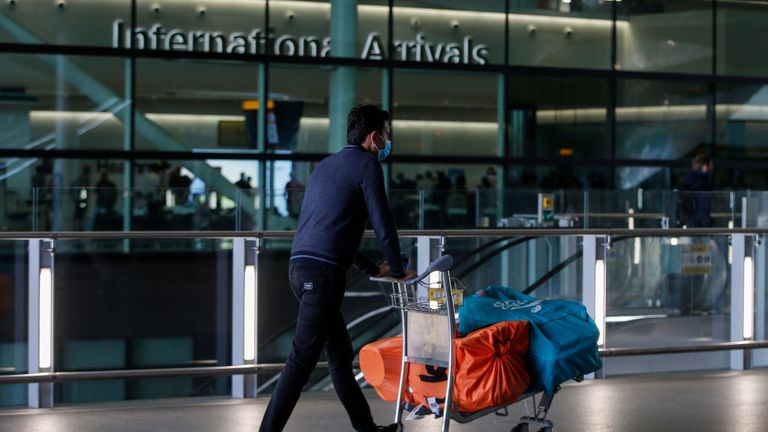 A government taskforce was launched earlier this month to look at ways of reducing the two-week isolation period required of people returning to the UK from some countries.

But Heathrow said that, with £4.5bn of liquidity, its financial position remains “robust” and its cash reserves are “sufficient” for the next 12 months “even under an extreme scenario with no revenue”.