LONDON — The third edition of the China International Import Expo opened its doors Thursday and runs until Nov. 10 in Shanghai’s National Exhibition and Convention Center.

Even though the pandemic has largely subsided in China, all visitors are required to take a coronavirus nucleic acid test two days before entering the trade fair, and wearing a mask is mandatory inside the venue.

A highlight at this year’s CIIE is The Korloff Noir, an 88-carat black diamond, which is named after the Korloff-Sapojnikoff family, members of the Russian nobility, who originally owned the treasure. The stone is valued at $37 million and is now owned by French jeweler Korloff.

Richemont is a newcomer, while LVMH Moët Hennessy Louis Vuitton, the star of last year’s edition, is noticeably absent this time.

The Swiss luxury group has brought 13 of its brands — including Cartier, Montblanc, Piaget, Vacheron Constantin and Chloé — to its 5,400-square-foot pavilion, and Piaget is launching the world’s thinnest watch — the Altiplano Ultimate Concept — which is only 2 millimeters thick for China.

“Over the years, China has been one of the most valued markets for Richemont,” said Jérôme Lambert, chief executive officer of Richemont, adding that China boasts broad market prospects as the country is in the fast lane toward greater consumption.

The Kering pavilion, designed by Ole Scheeren and hosting all the French group’s brands, highlights its strategic vision of “modern luxury,” as well as strengthens its commitment to the Chinese market.

Scheeren said he took an evolutionary approach to the pavilion’s design, which was initiated in 2019. The pavilion, which is “an imaginative statement on sustainability with style,” reuses 66 percent of the overall material weight. It consists of a series of rose-hued display cubes, prismatic vitrines, multimedia installations and signature works of fashion from the Kering brands. 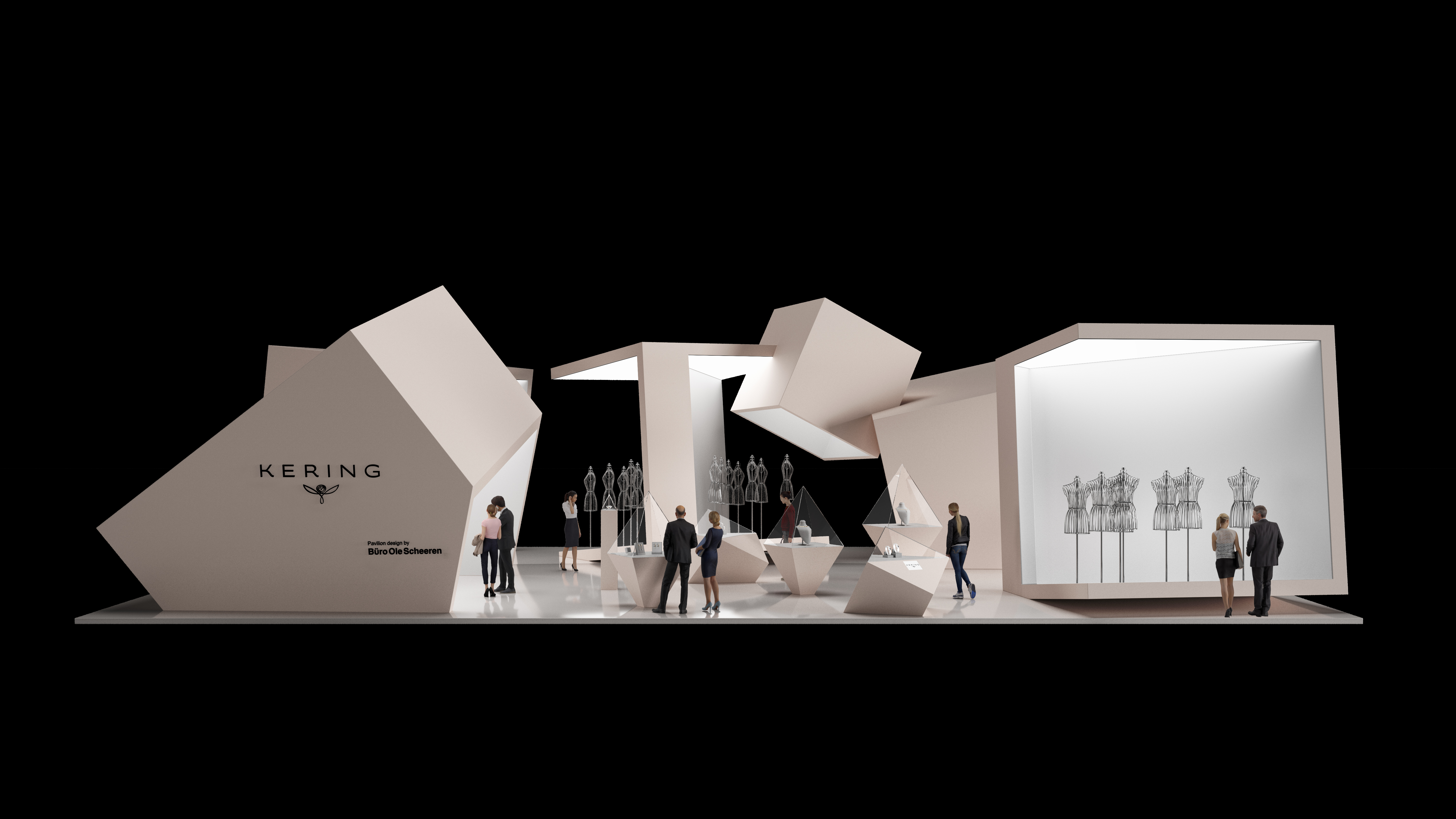 Cai Jinqing, president of Kering Greater China, said, “In attending the CIIE this year, we appreciate and value this important opportunity to present Kering’s vision for the ongoing evolution of the luxury industry, and the role it can play in helping ensure a sustainable future. Moreover, we hope to expand our partnership with our business partners and stakeholders in China to further craft tomorrow’s luxury together.

“China is a key market for the global luxury industry and Kering has been successfully operating in China for over four decades,” Cai added. “China’s ongoing development and economic rise have seen Chinese consumers’ expectations of the luxury industry rapidly evolve and our commitment to serving these expectations is unwavering.”

François-Henri Pinault, Kering’s chairman and ceo, told China Daily earlier that, “We have not seen any major shift in the customer’s mind-set before and after the [COVID-19] outbreak, which we believe is mainly due to their confidence in the government and the overall recovery of the country. Customer expectations toward luxury brands are rather reinforced after the crisis. Luxury contributes to the aspirational lifestyle and the construction of identity, which is more necessary now than ever. I see that luxury is now part of their personal story and journey.”

Highlights inside the pavilion include Balenciaga’s presentation of a vintage dress from the Sixties and a new 2020 dress coat, and Ulysse Nardin’s CIIE limited-edition watch, which features a panda-inspired enameled dial with two small counters in black, an analogue of a panda’s rim of eyes.

Nike is making its CIIE debut with a 5,200-square-foot pavilion, with a focus on three sectors: Its work with partners to promote the development of sports in China, its efforts to achieve sustainable and innovative practices, as well as multiple long-term projects with a sustained investment in charity programs.

Dong Wei, general manager of Nike Inc. Greater China, said, “This year is a special year, this exhibition for the first time sets up a sports goods and events zone, highlighting the importance of sports and health of the people. Nike believes in the power of sport to change and connect the world, and since we entered the Chinese market in 1981, we have always been committed to promoting a culture of sport, daily exercise, and healthier lifestyles.”

Fast Retailing’s Uniqlo calls its 16,145-square-foot exhibition area “Museum of Tomorrow.” As the largest pavilion in the consumer products section, Uniqlo showcases several of its innovations such as 3-D knitting technology, thermal underwear and waterproof materials, as well as the global debut of J+, its renewed collaboration with Jil Sander herself. 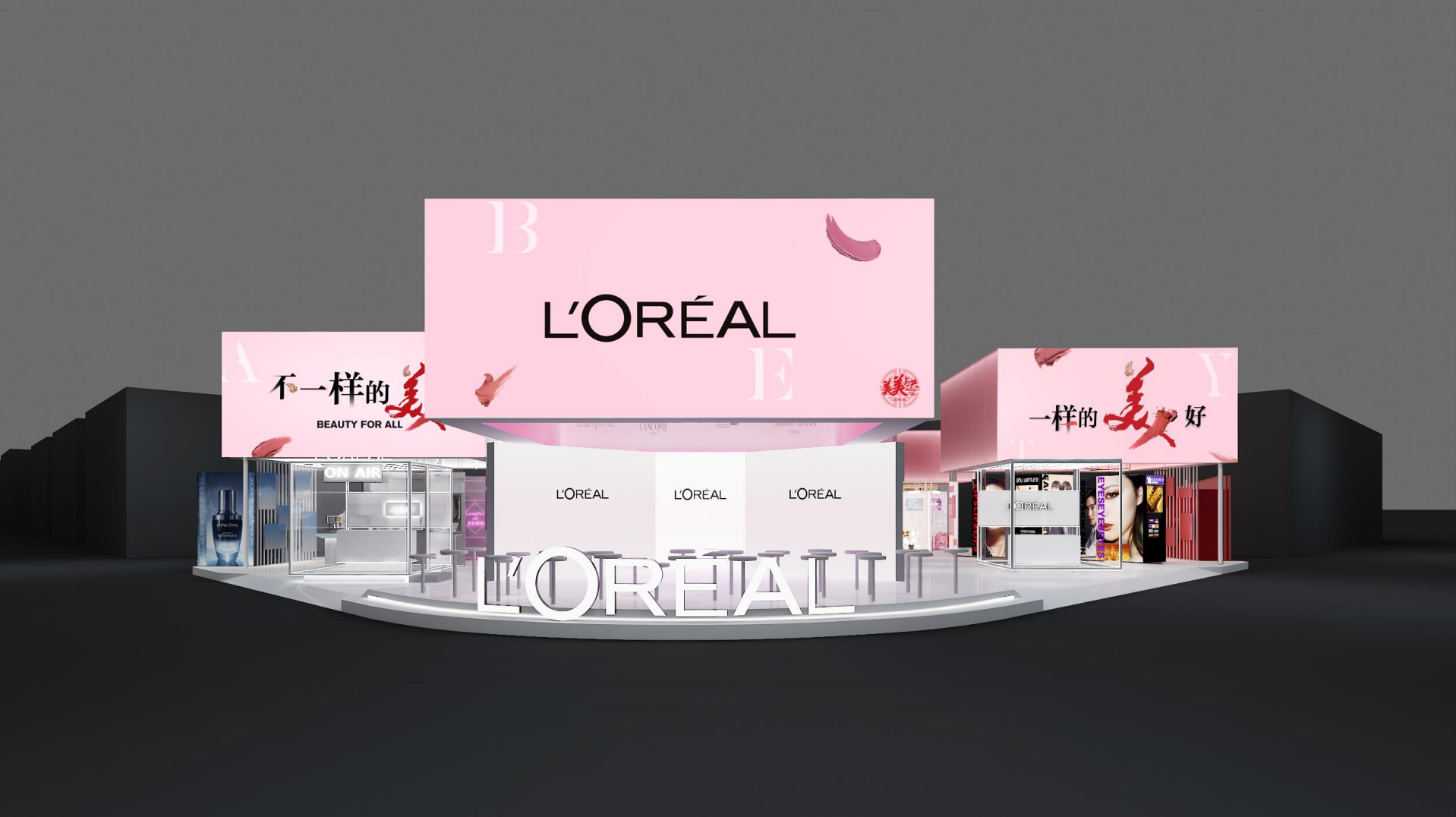 L’Oréal is unveiling five brands, more than 100 products, and new technologies with partners and collaborators at CIIE in the theme of “Beauty for All.” The company is also CIIE’s rotating chairman of the Enterprise Alliance Council, as well as the chairman of the Special Committee for Consumer Goods Industry.

Four fragrance brands — Maison Margiela, Ralph Lauren, Viktor & Rolf and Valentino — and essential-oil skin-care brand Decléor will be introduced to the Mainland China market at CIEE. L’Oréal is also showcasing at CIIE The Perso, the world’s first device to allow consumers to make custom beauty products at home, and the AI-powered smart makeup recommendation app “Face Maestro.” L’Oréal developed them together with its tech subsidiary ModiFace.

The company is introducing Miss M, L’Oréal’s first virtual celebrity. She provides visitors with an introduction to L’Oréal’s pavilion and accompanies them on an immersive experience. In the future, Miss M, who is a laboratory observer at MG’s Mask R&D Center, will be active on various mainstream social media platforms such as Weibo, WeChat, TikTok and Red, where she will share snippets from her day-to-day life and exciting updates from MG, a Chinese facial mask brand L’Oréal acquired in 2013.

Its pavilion design is based on the ideas of diversity and universalization, convenience and adaptiveness, health and wellness, sustainability and inclusiveness, and efficacy and potency, as the world’s biggest beauty group hopes to facilitate the exchange of industry ideas and promote business prospects.

Fabrice Megarbane, president and ceo of L’Oréal China, said, “We will help the CIIE become not just an event where new products are unveiled to the world for the first time, but a platform where the world will access ‘new ideas, new scenarios and new solutions’ that will lead to good consumption.”

Jean-Paul Agon, chairman and ceo of the L’Oréal Group, added that, “In today’s world, where differences are at the forefront, the CIIE serves as an invaluable platform for all participating nations and companies, one where everyone can embrace each other’s differences and seek common ground and subsequently cobuild and share a future that is brighter as a result.” 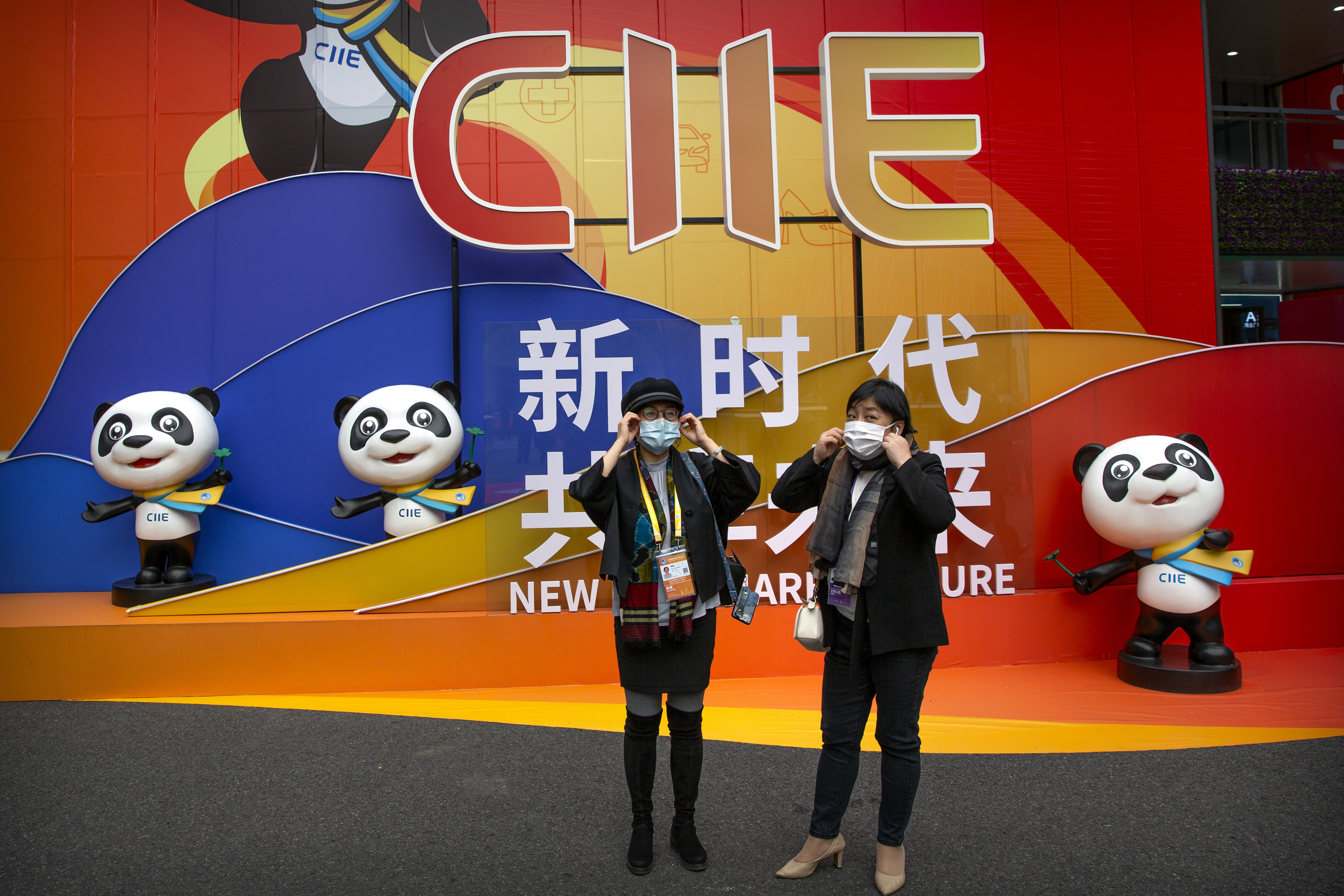 Women adjust their face masks as they stand in front of a display at the China International Import Expo in Shanghai. AP

Its pavilion, spanning more than 5,200 square feet, splits into two areas — the New Future Health and Beauty Habits, and New Future Hygiene Habits zones, according to a company spokeswoman.

Kao’s main theme will be “Creating the Future and Creating Life,” she said.

“We will also exhibit basic research and development to realize the ‘kirei’ life that Kao is focusing on, and social contribution activities for the sustainable development of society,” she said.

In the New Future Health and Beauty Habits zone, Kao is introducing upgraded products with Fine Fiber Technology, which was popular in the second Import Expo, the spokeswoman explained.

“In the New Future Hygiene Habits zone, we will introduce solutions to protect families from invisible risks in life in the after-corona era, for each specific [moment]…at home or on-the-go,” she said. “We propose disinfectants and clothing-care sprays that are indispensable for daily life, wipers used indoors, disinfectant sprays, antibacterial hand soaps and laundry detergents used in washrooms, and disinfectant dishwashing detergents used in kitchens, etc.” 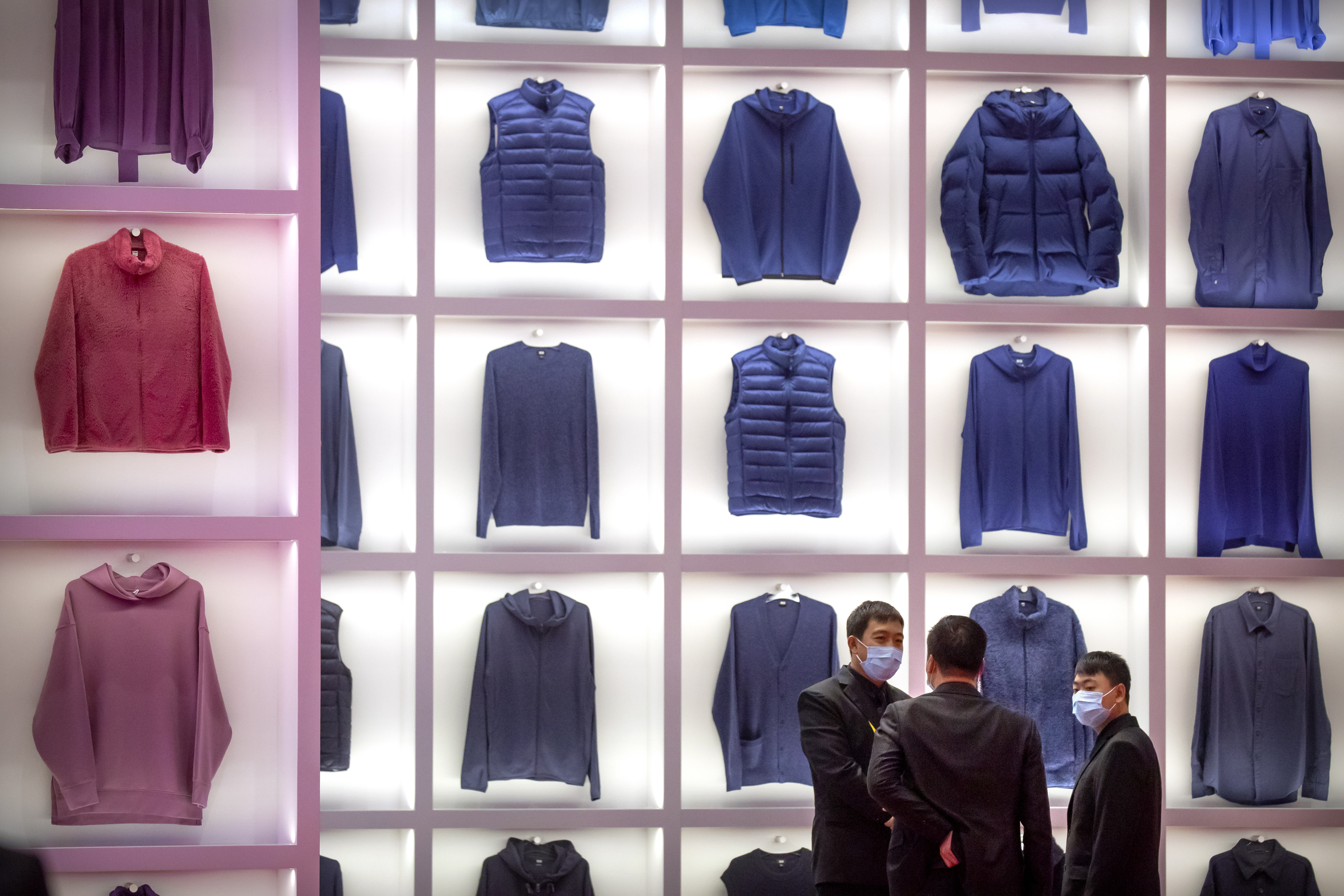 Visitors wearing face masks to protect against the coronavirus stand in front of a display from clothing retailer Uniqlo at the China International Import Expo in Shanghai. AP

Shiseido Group is bringing two brands to the Chinese market at CIIE, including its high-end luxury skin care brand The Ginza and new brand Baum, which was introduced in Japan last June.

Naoko Hase, head of corporate strategy division at Shiseido China, said the country is the second-biggest market for Shiseido by sales, only after Japan, and is seen as one of its most important.

The inaugural expo in 2018 drew more than 3,600 exhibitors from 172 countries, regions, and international organizations, and attracted more than 400,000 buyers, who agreed on $57.83 billion of intended deals in six days.

The second expo was attended by exhibitors from a total of 181 countries, regions, and international organizations, and attracted more than 3,800 enterprises who reached $71.13 billion worth of tentative deals for one-year purchases of goods and services.

The latest edition is expected to set new records.