Mike Ashley’s retail empire, which includes House of Fraser, has warned of further store closures after profits slumped by a fifth.

The Frasers Group, which also owns Sports Direct and Evans Cycles, said it had been “the most challenging year in the history of the company”, although it said there was now “a semblance of normality returning”.

The postponed results for the firm – the second consecutive annual delay – showed sales across its brands jumped 6.9% to £3.96bn in the 12 months to 26 April compared with a year earlier, but pre-tax profits fell almost 20% to £143.5m.

Having already shut five of its 53 House of Fraser stores in the UK, the group said in a statement: “There are anticipated to be further closures over the coming period, the number of which will depend on the outcome of lease negotiation.” 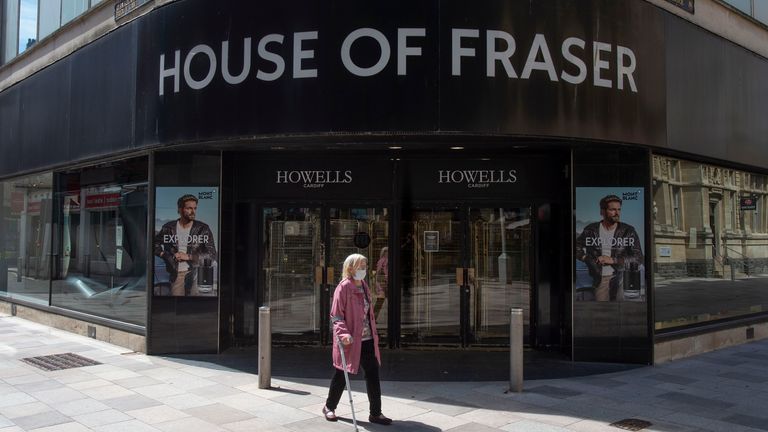 However, Frasers Group also said it wanted to spend “in excess” of £100m on a digital upgrade with a focus on its luxury brand business, Flannels.

It said “this investment will be integral in supporting the continued growth of our online channels”.

Combined with the reopening of stores following the COVID-19 lockdown, the group forecast growth of up to 30% in the current financial year.

In addition, the group has plans to open Sports Direct, Evans Cycles and Game on the same sites, although gave no numbers and warned this could be impacted by the coronavirus pandemic.

It has also backed increasing corporation tax by 1% to directly raise funding for the NHS.

The firm said in a statement that the financial year “will likely be remembered as the most challenging year in the history of the company”.

It added: “The political uncertainty around Brexit had been with us for far too long and, just as we were feeling more confident of getting some clarity and stability, the COVID-19 crisis arrived which will continue to have an impact on the economy and our business.

“The COVID-19 situation had a significant impact on our business performance across the group in March and April (and continued to do so in the post year end period) due to the shutdown of retail stores.

“Thankfully, as at the date of release of these financial statements, there is a semblance of normality returning with virtually all retail stores now fully open across the group, albeit subject to strict social distancing measures.

“However the future, at least in the near term, is unclear as we and indeed the world come to terms with living under the threat of COVID-19 and what its short, medium and long term effects may be.

“There is currently a risk of a second wave which could lead to reinstatement of lockdown restrictions and there will be economic consequences which we do not yet fully understand.”

Just days before Frasers was due to present its annual results, the firm revealed its chairman had accidentally brought around £11,000 worth of shares, in breach of City rules.

People who are likely to have access to information from inside a company are banned from trading in its stocks 30 days before it releases any financial details, during what is known as a closed period.