While Japan’s corporations have long resisted the entreaties of activist shareholders, Toshiba had come under intense pressure after a series of scandals. 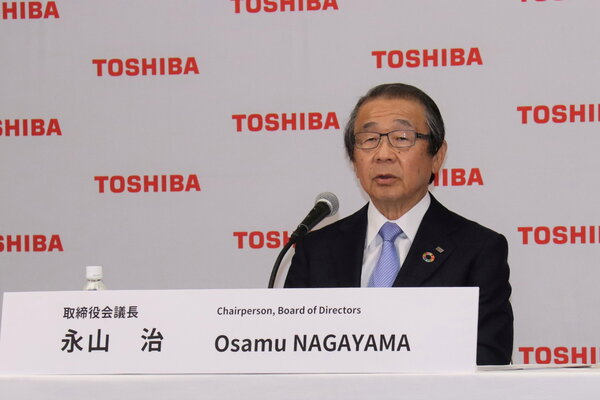 TOKYO — Shareholders of the scandal-plagued industrial giant Toshiba threw out the company’s board chairman on Friday, after an investigation revealed that top executives had worked with the Japanese government to inappropriately pressure investors.

The ouster of the chairman, Osamu Nagayama, 74, represents a major win in a battle between Toshiba and foreign investors who have pushed the conservative company to clean up its governance. It is also a breakthrough in a broader effort to increase investor oversight of Japanese corporations, following a series of government-led changes meant to make companies more transparent and accountable.

Toshiba was tossed into disarray earlier this month after an independent investigation concluded that the company’s chief executive, among other members of its leadership, had colluded with top officials at Japan’s trade ministry to dissuade shareholders from exercising their voting rights at last year’s general meeting.

The resulting scandal led to the resignation of the company’s chief, Nobuaki Kurumatani, as well as four board members. But Mr. Nagayama, the chairman, had stayed on, arguing that he had a responsibility to clean up the company’s governance.

Shareholders disagreed, voting against him and a second board member, Nobuyuki Kobayashi, who had served on the board’s audit committee. Vote totals have not yet been made public, but Mr. Nagayama had been expected to win a new term by a thin margin.

Some Toshiba investors had cast blame on Mr. Nagayama after an initial internal investigation into irregularities at last year’s general meeting glossed over problems at the company.

In March, shareholders dissatisfied with the report’s conclusions revolted and forced the company to undertake a second independent investigation. That inquiry revealed that Toshiba executives had asked high-ranking trade ministry officials to stop the company’s largest shareholder, the Singapore-based hedge fund Effissimo Capital Management, from opposing the company’s preferred slate of directors. The company also put pressure on two other investors, including Harvard’s endowment fund, the report concluded.

At this year’s general meeting, shareholders rattled off a series of complaints about the company, ranging from accusations of harassment of employees to criticism of its long record of scandals and shoddy governance.