The initial public offering of Apria Healthcare last week was a $170 million boon to Blackstone Group, the private equity firm that is Apria’s majority owner.

But as lucrative as that payday was, it wasn’t as good as the one Blackstone extracted from the company just a few weeks earlier: about $200 million in dividends, paid with borrowed cash.

The practice has a divisive history — Hertz and Payless, the shoe retailer, are just two of the companies that recently faltered after their private equity owners heaped debt on them while pulling out cash. Now dividend payouts are booming again.

In the second half of 2020, private equity-owned companies borrowed some $27 billion to pay for dividends or debt restructurings, according to a report by S&P Global Market Intelligence’s Leveraged Commentary & Data. That was the most active period for these loans in nearly three years.

And the borrowing hasn’t slowed down this year: $4.7 billion in the first six weeks. That was the second-highest amount for any comparable period since the firm began tracking that data in 2000.

This form of borrowing is surging just as private equity firms are likely to face greater scrutiny with Democrats now in control of Congress and the White House.

The revival in these transactions — called dividend recapitalizations — can be traced back to the upheaval of the pandemic and the policy responses meant to steady the economy.

First, there’s pent-up demand. Private equity firms spent much of the first half of last year making sure that companies in their portfolios were sturdy enough to survive the pandemic. Any borrowing that was put on hold then can happen now that fear of economic disaster has begun to ebb.

Second, there’s plenty of cash available from lenders willing to make these loans. With interest rates at rock bottom, institutional investors are looking for ways to get better returns than they’d get from corporate bonds or money market funds. That means they’re increasingly willing to buy the leveraged loans that are the main financing mechanism for dividend recaps.

The high demand for leveraged loans is “opening the door to opportunistic transactions, such as dividend recapitalizations,” said Marina Lukatsky, a senior director with S&P Global Market Intelligence’s LCD.

When private equity firms take dividends from their companies, the money doesn’t entirely go straight into its coffers. Rather, the payment goes to the investment fund that technically owns the company and in which the private equity firm’s clients — including charitable foundations and big pension systems — hold a stake.

That makes dividend recaps a crucial tool for private equity firms to keep clients happy — and a way to deliver returns to clients even if a company isn’t turning a big profit.

“Dividend recapitalizations are occasionally used to return funds to the pension fund investor so they can reinvest in another asset and ultimately strengthen retirements,” said Drew Maloney, president of the American Investment Council, the association for private equity industry.

But some Democrats in Congress hold a less benign view, and the borrowing boom is being closely watched by lawmakers including Senator Elizabeth Warren of Massachusetts. 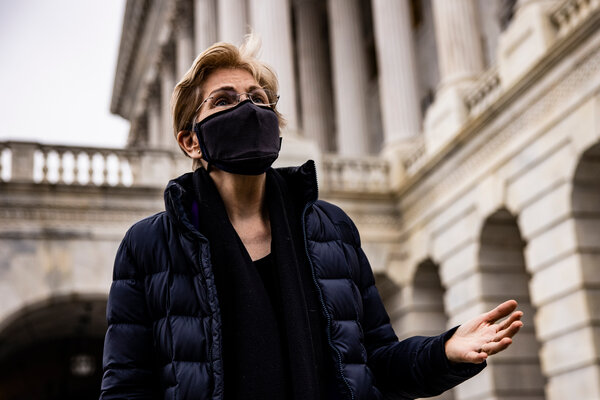 Ms. Warren, an outspoken critic of private equity, said the dividend paid by Apria was indicative of how Wall Street firms are “padding their own pockets.”

A centerpiece of her unsuccessful run for president in 2020 was the Stop Wall Street Looting Act, which, among other things, would prohibit private equity firms from collecting dividends for two years after taking control of a company. Ms. Warren’s measure would also seek to hold Wall Street firms accountable for the impact of any legal obligations incurred by those companies while under a private equity firm’s control.

Part of her legislative agenda remains holding the private equity industry “accountable for what happens with their target companies,” she said in a statement late last month when asked about the Apria deal.

The dividend recap carried out by Apria was by no means the largest of 2020. Epicor Software, a company that was backed by the KKR investment group, completed a $1.9 billion deal, and Radiate Holdco, a TPG Capital-owned company, did a $2.6 billion deal, according to S&P Global Market Intelligence.

And not all borrowing necessarily went to dividends. The loans can also be used to restructure debt, and portfolio companies rarely disclose how much of the borrowed money is paid out. S&P estimates, however, that 45 percent of a dividend recap over the past five years went to paying a private equity owner.

In a recent regulatory filing, Apria, a major supplier of oxygen and respiratory devices to people living at home, said it was financially sound and generated about $1 billion in revenue and $41 million in net income in 2020. The company — which also paid a $175 million dividend in 2019 with mostly borrowed money — said it had a “relatively unburdened balance sheet with low debt levels.” Apria said it had no immediate plans to pay a dividend to shareholders after its I.P.O.

Apria and Blackstone, which will remain Apria’s majority owner, declined to comment.

Jim Baker, executive director of the Private Equity Stakeholder Project, said the main concern with using borrowed money to pay for a dividend is that it could hamstring a company’s ability to borrow new money for purposes that could help it grow.

“Debt-funded dividends do nothing to help private equity-owned companies and only put those companies at greater risk,” said Mr. Baker, whose advocacy group is backed by labor unions and other nonprofit organizations.

A report in October by Mr. Baker’s group, which focused on dividends paid out by health care companies controlled by private equity, found that several either had filed for bankruptcy or were otherwise struggling as a result. Trident USA, a provider of mobile diagnostic equipment to nursing homes and elder care facilities, filed for bankruptcy in 2019 after piling on debt to pay out $380 million in dividends to several private equity firms, including Audax Group and Frazier Healthcare Partners, several years earlier.

The report also focused on the financial problems of Prospect Medical Holdings, a chain of hospitals in five states, which paid out a $457 million dividend in 2018 to the private equity firm Leonard Green & Partners and other owners. Over the past two years, the chain has shuttered five facilities and laid off more than 1,000 workers. A representative for Leonard Green declined to comment.

There are signs, however, that portfolio companies could be in a position to handle the swell in borrowing and that concerns about dividends might be overstated.

Even with the pandemic, the number of bankruptcy filings by private equity-backed companies declined to 147 last year from 201 in 2019, according to PitchBook Data, which collects information on private markets.

That can be partly explained by the success of government relief efforts like the Paycheck Protection Program, which allowed small businesses to receive forgivable loans to cover certain expenses, said Wylie Fernyhough, a private equity analyst with PitchBook.

He said private equity companies were forging a better relationship with lenders — some of which don’t include big banks — that were backing buyouts.

“We saw a lot of instances where a P.E.-backed company may have been struggling, but the sponsor and lender were able to work something out,” Mr. Fernyhough said.

That was an indication, he said, that private equity firms have dialed back some of the practices that earned the industry a poor reputation as scavengers that acquire companies and then strip them of assets. And lawmakers should be mindful of that.

“Much of the legislative talk is a vision of private equity, with aggressive financial engineering, that really doesn’t exist anymore,” Mr. Fernyhough said. “It’s a decades-old model.”