MILAN — Rinascente has another store renovation in the pipeline.

After the most recent revamping of its locations in Turin and Florence, the Italian department store has kicked off the restoration plan of its unit on Rome’s Piazza Fiume, which is turning 60 this year.

The store is located less than a 10-minute drive from the Roma Tritone flagship, which the company inaugurated in October 2017 and which required an investment of 200 million euros to be completed.

“Tritone is a beautiful destination and three kilometers away we have this store that is not in impeccable conditions,” explained Rinascente chief executive officer Pierluigi Cocchini. “Our brand cannot be represented in one city in such different ways and that’s one of the reasons behind our decision to embark on this project.”

The Roma Piazza Fiume store occupies an eight-story building that was designed by Italian neo-rationalist architect Franco Albini with Franca Helg. The building, which felt highly modern and functional when it was built in the 1960s, is owned by the Megas fund, which is managed by Prelios SGR.

As Prelios SGR head of fund management Alessandro Busci revealed, the agreement with Rinascente to restore the building was signed in April 2020, during the first lockdown imposed by the coronavirus pandemic. “I think that this project is a sign of courage and foresight, especially in a moment when the retail business has been significantly impacted in a city like Rome, where tourism is a key component.”

Despite Rome certainly being one of the most important tourist destinations in the world, Cocchini highlighted how the Rinascente store on Piazza Fiume mainly relies on local consumers, which account for 98 percent of its around one million annual visitors.

The CEO explained that the renovated store will carry some of the brands already available at Roma Tritone, and a big focus will be put on the food hall on the last floor, as well as on women’s shoes and beauty. 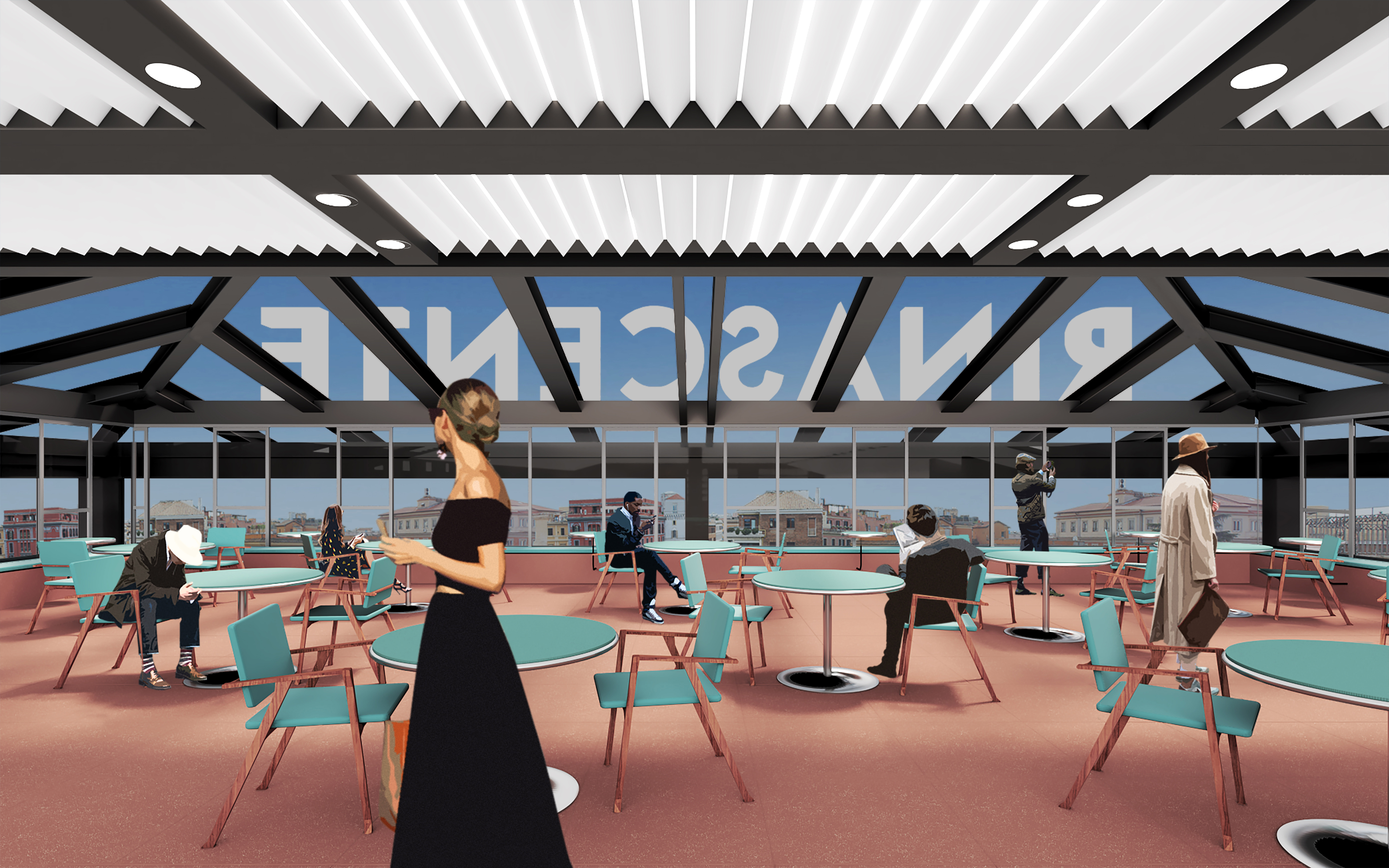 A rendering of the food hall at Rinascente Fiume store. Courtesy of Rinascente

As the company traditionally does with its stores, Rinascente assigned the renovations of the levels to different architecture firms in order to create customized and diverse spaces.

The renovation, which will require an investment of 37 million euros (23 million euros will be paid by Prelios SGR’s Megas fund, Rinascente will disburse 9 million euros and concession brands will invest 5 million euros to decorate their spaces), will address the facade, the interiors and the outdoor space around the building, including a garden.

As with Roma Tritone, where Rinascente signed an agreement with the Rome Municipality investing 3 million euros to enlarge the sidewalks of Via del Tritone and Via Due Macelli streets, the company will remodel the sidewalks around the building.

According to Cocchini, the first fruits of the renovation will be visible this June, when the store will unveil the renovated fourth floor, which has been redesigned by Milan-based DWA Design Studio to house the women’s ready-to-wear collections of a range of brands, including Max Mara Weekend, Polo Ralph Lauren and Gerald Darel, as well as underwear labels and an area dedicated to seasonal assortments, including beachwear.

In the meantime, renovations will progressively continue on the exterior and interior, while the store will remain operative. Cocchini noted that the facade, which will include an outdoor elevator, the windows, the food hall on the sixth floor and the ground level will be completed by the beginning of 2022. Rinascente expects to finish completely in August 2023.

According to Rinascente’s business plan, Roma Piazza Fiume, which will host the collections of more than 500 brands, will generate 50 million euros of net sales within five years from the end of the renovation. Rinascente’s best-performing stores are its two flagships, Milano Duomo and Roma Tritone.

Currently, 235 people work inside the Roma Piazza Fiume store (130 of them employed by concession brands), but, thanks to the creation of the food hall, Cocchini said 30 and 50 new jobs will be created. “We have great expectations for this area. If the restaurant currently makes half-a-million euros, we expect that after the renovation it will generate revenues of over 3 million euros.”

Rinascente, which most recently unveiled the remodeling of its Florence unit following an investment of 12.5 million euros, operates a network of nine stores in Italy. In June last year, the company, which is owned by Thailand’s Central Group, launched its e-commerce, which is currently available only for Italian consumers. “The online store is still in a developing phase, and we don’t carry yet all the concession brands that will join soon,” Cocchini said. “There is still a lot to do to reach our five-year goal of 100 million euros in sales.”

The company business has been affected by the COVID-19 emergency. In 2020, Rinascente saw its net sales decreasing 35 percent. “The business is slowly recovering, but we expect to return to pre-COVID-19 figures in 2022.” In 2019, the company generated net sales of 800 million euros.