Robert Sam Anson, a virtuoso of magazine writing who ventured with equal brio into the mean streets of Los Angeles, the jungles of Southeast Asia and the psyches of prominent American men, died on Nov. 2 at a home where he had been staying in Rexford, N.Y. He was 75.

The cause was complications of dementia, his son, Sam Anson, said.

A bear of a man who resembled the actor James Coburn, Mr. Anson wrote mostly for Vanity Fair, where he was a contributing editor for more than two decades, but also for Esquire, Life, The Atlantic and New Times, a short-lived crusading magazine of the left in the mid-1970s.

He was “the last of a breed of broad-shouldered, bare-knuckled, ’70s magazine journalists who will chopper into any hellhole on Earth and come back with an epic story,” his Esquire editor, David Hirshey, once said.

Mr. Anson’s byline promised vigorous writing, vivid scene-setting and insight into complicated, sometimes difficult men, of whom he was one.

“He, too, was magnetic and brash, turbulent and complex, passionate and fascinating,” David Friend, an editor at Vanity Fair, wrote in a tribute after Mr. Anson’s death.

Among those he profiled were the director Oliver Stone, who at the time was making his controversial movie about the assassination of John F. Kennedy; Tupac Shakur, written after the rap star’s death; David Geffen, the music mogul, who allowed Mr. Anson a glimpse into his kaleidoscopic life; and Doug Kenney, the comic genius and co-founder of The National Lampoon, whose life was anything but funny.

“The thing about Bob was that he was both vulnerable and imposing at the same time,” Graydon Carter, the former editor of Vanity Fair, said in an email interview. “The wild man of his youth — and he was really out there — gave way to a journalist of towering bravery and ingenuity.”

As a 24-year-old correspondent for Time magazine in Cambodia, Mr. Anson was taken prisoner of war in 1970 and held for weeks by the North Vietnamese and their murderous allies, the Khmer Rouge. 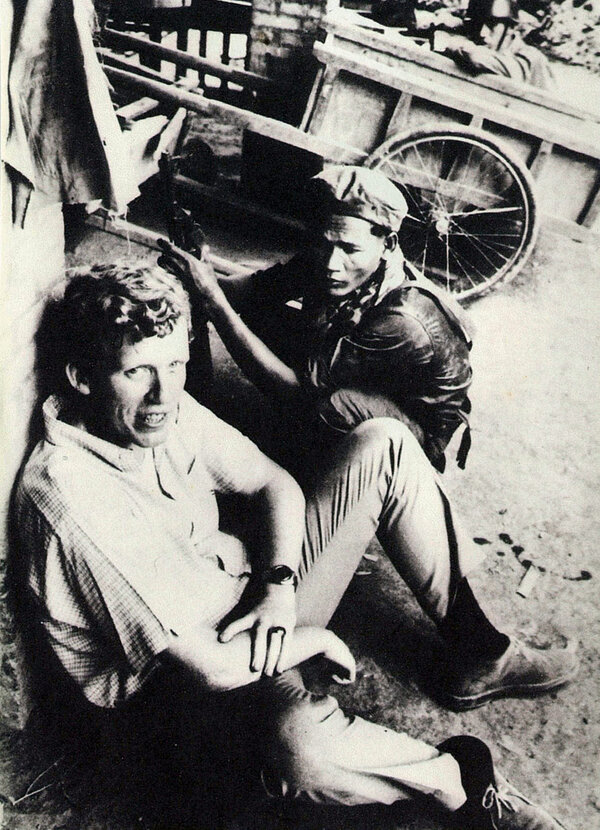 “Bravery isn’t just about launching yourself into a war zone — although he did that,” Mr. Carter said. “It’s also the stories you’re willing to take on. Bob was especially brilliant covering the dark side of the male psyche.”

Mr. Anson probed his own psyche in the last of his six books, “War News: A Young Reporter in Indochina” (1989), a personal story of camaraderie, competition and the thrill of danger.

He was so exhilarated to be covering the war, he was hardly aware of the bullets flying around him. He frequently traveled over dangerous roads where some of his colleagues had been killed or kidnapped.

Such daredevilry, Mr. Anson wrote, “was a means where every day you could test yourself, your willingness to push the limits.”

“And God knows it was fun,” he added, “not just the doing of it, but the recounting of it later at cocktail time, where everyone claimed the closest call.”

In reviewing the book for The New York Times, Harrison E. Salisbury called it “the story of a very young man at war, a tale that is told with gusto and excitement and captures a correspondent’s almost reckless pursuit of danger.”

An opinionated man who was fiercely protective of his work, Mr. Anson was not an easy edit. “He talked back to editors,” Ken Auletta, The New Yorker media writer and a longtime friend, said in a phone interview.

“And he would call people out,” he added. “If a fellow reporter was cutting corners or not being aggressive in his questioning, he would call them out. He made enemies that way. But from his point of view, he was telling the truth.”

Robert Sam Anson was born on March 12, 1945, in Cleveland. His mother, Virginia Rose Anson, was a schoolteacher. His father was not in the picture, and his mother and her parents raised him. His grandfather, Sam B. Anson, was a major figure in journalism in Cleveland, where he held publishing and editing jobs at the city’s daily papers. His grandmother, Edith (McConville) Anson, was a homemaker.

As Mr. Anson recounted in his LinkedIn profile, he was expelled from one school for what he said was his “resistance to idiotic rules.” His punishment for one misdeed was to copy, by hand, Stephen Crane’s “The Red Badge of Courage,” which “proved useful” when he covered Vietnam, he wrote.

He graduated from the Jesuit-run St. Ignatius High School in Cleveland in 1963 and went on to Notre Dame, where he majored in English and international relations. He graduated in 1967.

Mr. Anson’s three marriages ended in divorce. His brief first marriage, to Diane McAniff, whom he had met in college, was in the late 1960s. He was married, again briefly, to Sharon Haddock, a lawyer, in the mid-1970s. He married Amanda Kay Kyser, an artist, in 1985; they divorced in 2017.

In addition to his son, Sam, Mr. Anson is survived by two daughters, Christian Anson Kasperkovitz and Georgia Grace Anson; a sister, Edith Schy; and one grandson.

Time magazine hired him soon after college to work in its Los Angeles bureau. He covered politics, organized crime and what he once described as “a smorgasbord of mayhem,” which included the sensational killing of the actress Sharon Tate and others by followers of Charles Manson.

After he returned from Southeast Asia, he followed the 1972 presidential campaign, which led to his first book, “McGovern: A Biography” (1972). It was the authorized story of Senator George McGovern, the South Dakota Democrat who lost that election in a landslide to President Richard M. Nixon.

His other books include “Gone Crazy and Back Again: The Rise and Fall of the Rolling Stone Generation” (1981), a history of Rolling Stone magazine and its editor, Jann Wenner; “Exile: The Unquiet Oblivion of Richard M. Nixon” (1984), which examined the former president’s life after he left the White House; and “Best Intentions: The Education and Killing of Edmund Perry” (1987), about a Black honors student from Harlem who was killed by a white police officer in 1985.

In a departure for a man so identified with being a writer, Mr. Anson accepted an offer in 1995 to become editor of Los Angeles magazine. His brief tenure was a disaster.

Shortly after he took the reins, The Los Angeles Times wrote a scathing piece about him, portraying him as mercurial, pugnacious and sexist, “the kind of writer colleagues imagined nursed a Hemingway complex.”

Others believed he was a gifted editor whose disruption of a stodgy workplace was bound to ruffle feathers. Still, he and the magazine parted ways after just five months.

He soon moved back East, “where he continued to torment editors, commune with friends and hunch over his keyboard for the rest of his days,” his son wrote in a letter to friends.

Mr. Anson did most of his writing from an Airstream trailer, which he kept behind his house in Sag Harbor, on Long Island’s East End. He survived a bout with cancer and became a mentor to other patients at Memorial Sloan Kettering Cancer Center in New York through its Visible Ink writing program.

Almost two decades after leaving Los Angeles magazine, Mr. Anson reflected on his editing experience in a blog called “About Editing and Writing.”

He said he was glad that he had gone back to writing, “where you’re responsible solely for the words you put on paper, not the lives and families of an entire staff.”

But the editing experience made him a better writer, he said, adding: “And boy, did it open my eyes about what editors have to put up with 24/7.”