A onetime business associate of Jeffrey Epstein who briefly controlled The New York Post, he spent 18 years in prison for a $460 million Ponzi scheme. 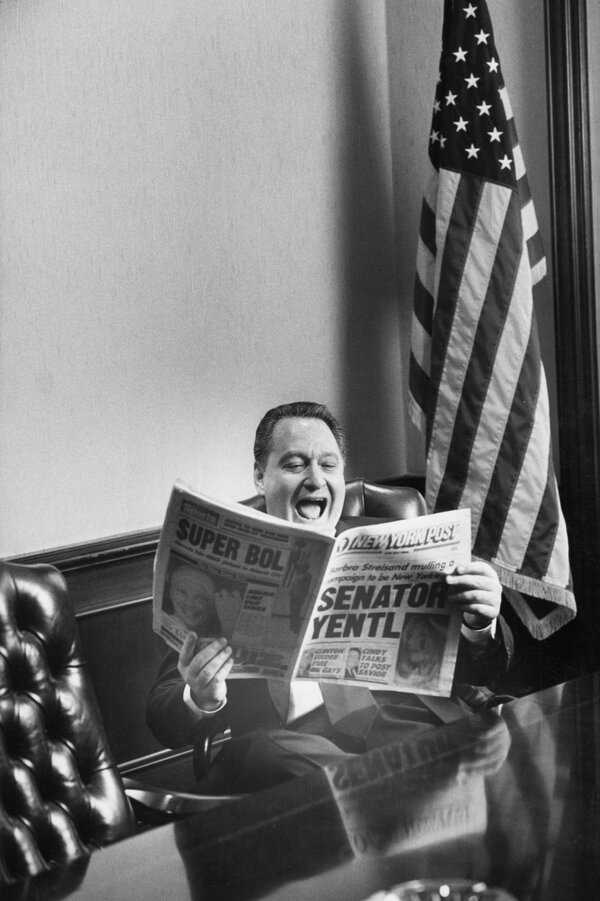 Steven J. Hoffenberg, a brash New York debt mogul who spent 18 years in federal prison after admitting to running a fraud scheme that prosecutors said was then among the largest such crimes in U.S. history, was found dead on Tuesday in the modest apartment in Derby, Conn., where he had lived for about two years. He was 77.

The death was confirmed on Friday by his daughter, Haley Hasho, and later by the Derby police.

Lt. Justin Stanko of the Derby police said the condition of Mr. Hoffenberg’s body when officers found it suggested that he had been dead for about a week. The officers were conducting a check after being contacted by a friend of Mr. Hoffenberg’s and by a private investigator, Lieutenant Stanko said.

An initial autopsy by the state medical examiner’s office did not find signs of trauma on the body, the police said in a news release, which also said an official cause of death was awaiting the results of additional toxicology tests.

Mr. Hoffenberg, who controlled The New York Post for a brief, tumultuous time in 1993, pleaded guilty two years later to conspiracy and fraud charges arising from a Ponzi scheme tied to his main company, Towers Financial Corporation, which was primarily a collection firm that bought debt from businesses like hospitals, nursing homes and phone companies.

Prosecutors said that Towers sold more than $460 million in fraudulent notes and bonds to investors and used some of the money to pay interest owed to earlier investors. The rest went to propping up a fiscal house of cards that relied on inflated revenue and phony profits to make Towers look like a major health care financing firm.

In his guilty plea, Mr. Hoffenberg, who once had a corporate jet, a limousine, a yacht, a Long Island estate and a Manhattan apartment, admitted to being the scheme’s mastermind. After leaving prison, he sought to blame someone else: his onetime business associate Jeffrey Epstein, who was later charged with the serial sexual abuse of young women and girls.

According to court and census records, Steven Jude Hoffenberg was born on Jan. 12, 1945, in Brooklyn, along with a twin brother, Martin, to Harry Hoffenberg, who worked in insurance, and his wife, Bernice.

Steven Hoffenberg liked to portray himself “in Horatio Alger fashion,” The New York Times reported in 1993. He said he was a City College of New York dropout and had started his career with just $2,000.

In the 1970s, many small-business owners in New York City knew Mr. Hoffenberg as a so-called bust-out artist. He would take over businesses, use them to buy goods on credit that he could then sell for cash, and not pay his suppliers. His targets were left in financial ruin. He arrived at liquidation sales in a chauffeured limousine.

A New York judge, commenting in a lawsuit filed in 1980 by the original owner of one such business, called Mr. Hoffenberg’s behavior “shocking to the conscience of the court.”

As Mr. Hoffenberg’s business grew, his financial machinations became increasingly complex. In 1980, he formed a private company to own the concentric corporate shells that made up Towers. In 1986, that company bought a publicly traded shell company in a deal that allowed Mr. Hoffenberg to take Towers public without submitting a formal prospectus to federal regulators.

By that year, Towers had added finance and leasing units to its core collections business and claimed to have nearly 1,200 employees and nationwide sales of $95 million.

Whether the numbers were true is unknown. Mr. Hoffenberg, who developed a reputation as a workaholic and a loner, also had a penchant for exaggeration.

In his 1987 annual report, for example, he called the company’s bill-collecting unit “a leader in its field” without offering details. That same year, he told Towers shareholders that the company would soon seek a Nasdaq listing. It never did.

It was also in 1987, Mr. Hoffenberg told The Times in 2019, that he met Mr. Epstein, a Brooklyn-born college dropout who had parlayed a teaching job at Manhattan’s prestigious Dalton School into a job at the investment firm Bear Stearns.

The 1980s takeover boom was in full swing. Mr. Hoffenberg hired Mr. Epstein as a consultant for $25,000 a month. The arrangement lasted about six years.

“I thought Jeffrey was the best hustler on two feet,” Mr. Hoffenberg told The Washington Post in 2019. “Talent, charisma, genius, criminal mastermind. We had a thing that could make a lot of money. We called it Ponzi.”

Years later, Mr. Epstein became well known as an enigmatic money manager and convicted sex offender who moved in elite circles. He hanged himself at a federal jail in Manhattan in 2019 while awaiting trial on sex-trafficking charges.

Mr. Hoffenberg and Mr. Epstein siphoned money from one of the insurers to make the Pan Am bid look more viable, but it failed anyway. They used a similar strategy the next year, plundering the second insurer for a run at Emery Air Freight, an effort Mr. Hoffenberg later described in a court filing as an “epic failure.”

When the takeovers flopped, The Washington Post reported, the insurers became insolvent and went into receivership. Thousands of customers in Illinois and Ohio lost out on millions of dollars meant to pay medical bills. Illinois regulators and the Securities and Exchange Commission sued Towers.

By 1988, according to prosecutors, the Towers fraud had begun to expand. Starting that year, they said, the company sold more than $270 million in promissory notes, offering fat returns and targeting widows, retirees and others with limited funds.

Mr. Hoffenberg’s splashiest move came in January 1993, when the financially embattled owner of The New York Post, Peter Kalikow, turned to him to rescue the paper.

“I’m here for the glory,” he told Mike McAlary, then a columnist for The Post. “I want to have a voice in New York City. I’ve made millions. Now I want to have some excitement.”

The thrill was short-lived. The S.E.C. blocked Mr. Hoffenberg’s access to the money he needed to buy the newspaper, forcing him into a contentious partnership with another audacious New York businessman, Abraham Hirschfeld. When the bid fizzled, Rupert Murdoch, who had previously owned The Post, bought it again.

Everything soon came to a halt. Towers went bankrupt, and federal prosecutors filed the fraud case against Mr. Hoffenberg. He ultimately pleaded guilty to five counts, including conspiracy to commit securities fraud and conspiracy to obstruct justice by directing employees to lie to S.E.C. investigators.

His lawyer told the judge that the plea was being entered “to spare Mr. Hoffenberg the trauma, embarrassment and expense of a trial.”

After leaving prison, however, Mr. Hoffenberg noted that he had told the grand jury it was Mr. Epstein, who was not charged in the case, who had engineered the transactions that kept the Towers fraud alive.

“He was the architect,” Mr. Hoffenberg told The Washington Post.

After being released from prison, Mr. Hoffenberg said he hoped to make amends to those he had duped. He also made common cause with women who said Mr. Epstein had sexually assaulted them.

One of those women, Maria Farmer, said that she and Mr. Hoffenberg had become friends. She was the one who called the Derby police.

She said that Mr. Hoffenberg was different from his public persona.

“If I had to use one word to describe him it would be ‘kind’,” she said.

Mr. Hoffenberg was married at least twice. His first marriage ended in divorce, according to a 1994 Times article. Details about a second marriage, to Lisa Twardowski, were not immediately available. Ms. Twardowski, who went by Lisa Twardeau, died in 2014.

Information on Mr. Hoffenberg’s survivors other than Ms. Hasho was not immediately available.

In an interview, Ms. Hasho, whose mother was in a relationship with Mr. Hoffenberg at the time of the federal prosecution, said she first met her father after he left prison when she was 19, that their relationship was “complicated,” and that she and her mother had “never benefited from any of his financial endeavors.”

“Steven had unusual charm and a masterful mind, but didn’t use it fruitfully,” Ms. Hasho said. “The rest is in God’s hands.”

How Mr. Hoffenberg, who once lived on Sutton Place, an exclusive address on Manhattan’s Upper East Side, came to live in a small first-floor unit in Derby, an old factory town an hour and a half from New York City, was unclear.

Pamela Gelder, who, with her husband, owns the apartment, said Mr. Hoffenberg was an “ideal tenant”: quiet, well dressed, polite.

“He calls at 8 a.m. the first of every month and asks when I’m coming to get the rent,” she said. “How can you get mad at a guy like that?”

Ms. Gelder said she had been unaware of his history.

“It’s a good thing I didn’t know,” she said, “because I would have asked him a lot of questions.”